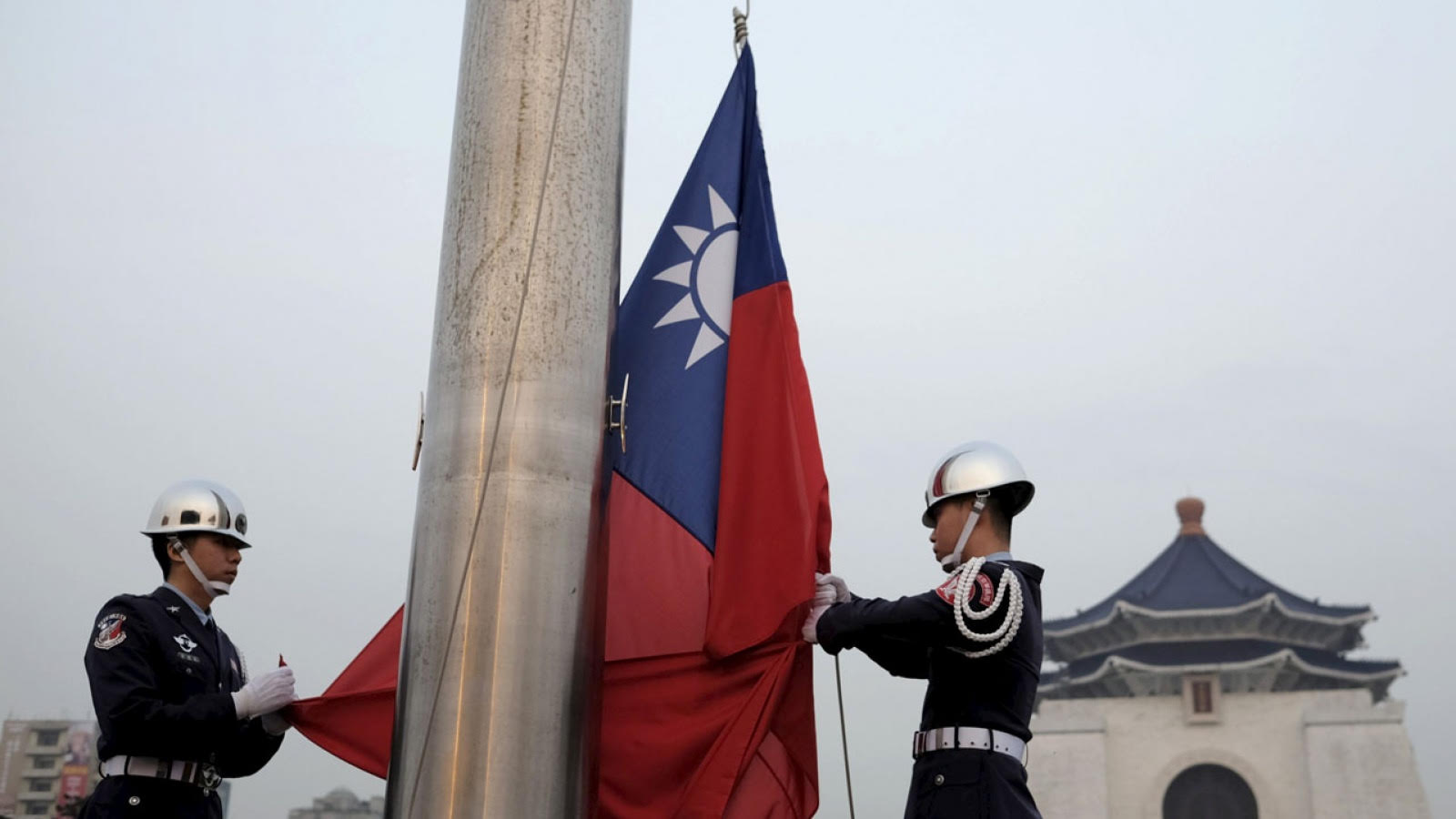 That might sound like a bit of a stupid question – the definition for a country tends to be quite simple: “a nation with its own government, occupying a particular territory”. So an island, with a president, parliament, independent judiciary, free press, flag, anthem, democratic system, political parties, distinct culture and history would appear to satisfy that definition and probably set standards other countries can only aspire to? Right – unless you’re talking about Taiwan…. 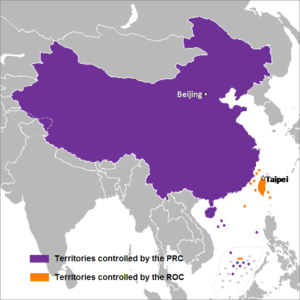 To understand Taiwan’s situation there’s a wealth of history to be processed that contains more political intrigue than House of Cards, more valuable antiques than Indiana Jones has dealt with and a transition from dictatorship to democracy that most countries could only dream of. But there’s books dedicated to that and that’s not what I’m here to write about – but nonetheless a bit of history does help

– If we start at the beginning (the best place to start I find) we’re back in 1912 since 1636 the Qing Dynasty of Emperors have ruled over China, but in this year, they’re toppled by a revolution ending a succession of dynasties that stretch back to time immemorial.  For the next couple of decades there’s to-ing and fro-ing between factions with warlords dominating the scene

– and in 1928 thanks to overtaxation under the warlords the government in Beijing collapses, opening the way for Chiang Kai-shek, the leader of the KMT to capture the city and become the de facto head of state of the Republic of China. However in his assertion of power he expels the Communists from his coalition and as a result a civil war – involving Communists, remnant warlords and the KMT starts. This war will cost nearly 2 million lives and cause havoc in the newly reunified country…

– There’s a brief pause in the war as the Japanese invade in 1937 (the Sino-Japanese war will later be viewed as part of the broader conflict of WW2 by most Westerners) with the Communists and KMT working together to drive back the invaders. However this is short lived and in “Free China” (the areas not occupied by the Japanese) skirmishes and battles between the forces continue, with the Communists defeating most KMT troops in this area whilst the majority of KMT forces are committed to fighting the Japanese.

– in 1945, following the brutal atomic bombing of Hiroshima and Nagasaki, the Japanese surrender, as the Communist and KMT forces focused on re-occupying the Japanese captured areas a truce comes into play as the country is recovering from this brutal conflict (for further reading – look up the Rape of Nanking). As part of the terms of the surrender the KMT (recognised as the government of China by the USA) are given control of Taiwan, which for the last 50 or so years was ruled by Japan.

– however, by 1946 the truce is falling apart, the KMT forces have taken the brunt of the Japanese attacks over the last few years and the Communist troops take advantage of this to gain control over nearly ¼ of the country. Furious warfare between the Communists and KMT ensues for the next 3 years, with the communists winning often by sheer strength of numbers, mobilising 5.4 million peasant troops in one campaign alone

– on October 1st 1949, the Communists proclaim the establishment of the People’s Republic of China, the KMT have been driven out of mainland China, their forces retreating to Burma/Myanmar in the South and two million KMT supporters retreating to the newly regained island of Taiwan, which had remained outside of Communist Party control.

– in December 1949 Chiang Kai-shek, proclaims Taipei, the largest city on the island of Taiwan as the temporary capital of the Republic of China (note the absence of the “People’s”). The Republic of China despite being reduced to holding only Taiwan and a few small islands off the mainland declares itself the legitimate government of China. The KMT have brought with them most of the national treasures of China, removing them from the Forbidden City and storing them on Taiwan, ready for their eventual return.

-so as 1949 drew to a close, there were two Chinas, one with a capital in Beijing and control over all of the Mainland under the one party rule of the Communists called the People’s Republic of China and the other restricted to Taiwan and under one party KMT rule called the Republic of China. Despite controlling most of the country, the Communists aren’t recognised by the UN as the legitimate government, with the KMT R.O.C holding the seat for China including a permanent place on the UN Security Council. 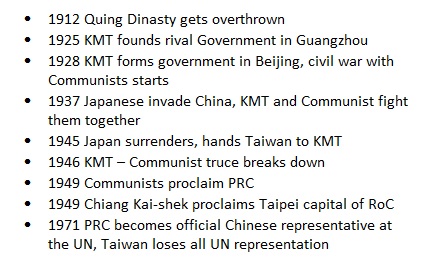 – until 1971, where everything changes… when thanks to a request by Albania a vote is held to determine which government (PRC or RoC) is the legitimate representative of China. Following a 76-35 vote in favour of the PRC, the RoC and KMT representatives (still led by Chiang Kai-shek) are expelled from the UN and all of its associated bodies where it remains to this day. The PRC demands only one China is recognised starting a divide that has continued well into the 21st century.

But why is this important? Well this year has brought increased attention to Taiwan, from Trump’s phone call to the President of the RoC/Taiwan and their exclusion from the World Health Organisation to complaints about Taiwanese cabin crew on Emirates wearing the flag of the RoC on their uniform. Such is the sensitivity of the issue that news outlets avoid referring to Taiwan as a country, in line with the official stance of most countries, viewing it as a breakaway province of the PRC.

Unless you live in one of a handful of countries, located mainly in the Pacific and Latin America, Taiwan won’t even have an embassy in your country – it will have a representative office (that basically does the same job as an embassy) and your country will have a counterpart in Taiwan. Until recently flights from the same airline weren’t allowed to fly to Taipei and Beijing, leading to a weird structuring where subsidiaries flew to Taipei to avoid incurring Beijing’s wrath (e.g. KLM Asia, British Asia Airways, Australia Asia Airlines – branches of KLM, British Airways and Qantas respectively).

The obvious move you would think would be for the RoC on Taiwan to accept they aren’t going to regain control of the mainland and just set themselves up as Taiwan, right? Whilst that might be obvious this brings us onto the next issue – though the PRC demands nations only recognise one government for China, if the RoC was to rename itself the Republic of Taiwan this would be seen as a declaration of independent and war would ensure (according to the PRC). And so Taiwan finds itself in this state of limbo – it can’t be recognised as the official government of China by any country wanting to still trade with the PRC (hence the ire of the PRC when Trump spoke with the President of the RoC) but it can’t change its name. So it keeps the anthem, the flag and the name of effectively a government in exile.

Managed to keep up with me so far? – well now things get more complicated – Taiwanese politics are split into two camps. The Pan-Blues and the Pan-Greens, the Pan-Blues are the KMT and like-minded parties, they want to keep the RoC as the name and are on the whole supportive of closer relations with the mainland and the preservation of Chinese culture. The Pan Greens (centred around the Liberal International Member Party known as the Democratic People’s party, DPP for short) support a move away from that, emphasising a Taiwanese identity – stating that if they’re de facto a country why shouldn’t they become one especially as the chances of the 290,000 strong RoC armed forces defeating the 2.3m strong People’s Liberation Army of the PRC and regaining the mainland are extremely slim. But the DPP and the Pan Greens aren’t reckless and don’t really want to be on the receiving end of an invasion force in response to declaring independence as Taiwan either, and nor do the KMT and the Pan Blues really want the PLA marching through the streets of Taipei anytime soon.

So the limbo persists. Leaving Taiwan/RoC as the elephant in the room, nearly every country in the world trades with Taiwan and our houses are packed with Taiwanese products – from Acer to HTC they dominate the electronics industry and hold immense sway in the mainland economy too. So back to where we started – despite Taiwan having the all the trappings of a country, it can only be one if it calls itself the RoC but if it calls itself that countries can only recognise it OR the PRC and not both. In terms of the effect this has on Taiwan, there are much better placed people to explain that than me, its exclusion from international bodies is certainly harmful but as a visitor to Taiwan it comes across as a beautiful and successful place as far removed from war as you can just about imagine.