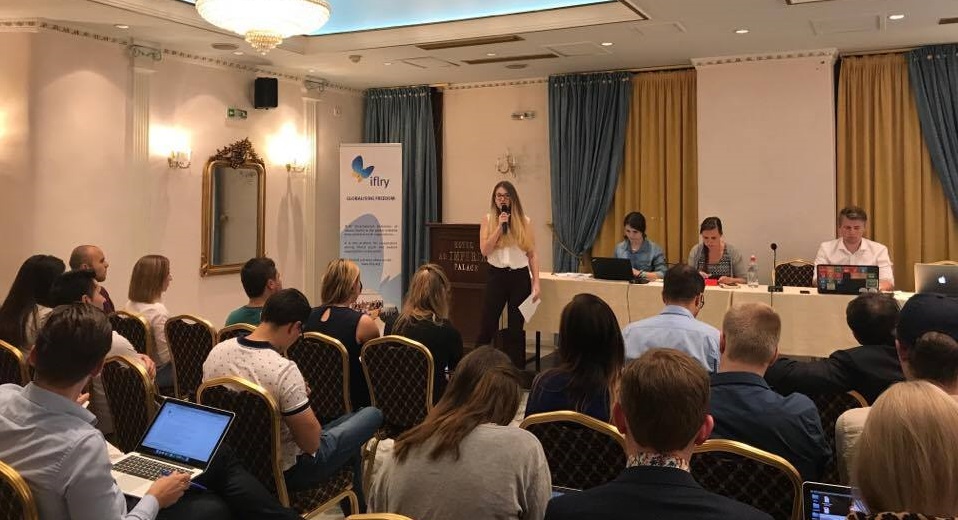 Last March I became a member of  JOVD, a classical liberal youth organization from the Netherlands. When I came into contact with someone from the JOVD bureau, I told them that I am interested in international politics. This person suggested that I should apply for a trip abroad, and I was very glad to be allowed to represent JOVD at the IFLRY general assembly (GA) in Thessaloniki, Greece, as a new member of my member organization (MO). So in the first weekend of June I travelled to Greece, not knowing what to expect, not knowing the other members of the JOVD delegation, and definitely not confident about whether I would like the event. As I arrived in beautiful and hot Greece, I went to my room, dropped my bags off and went for a walk. At that moment however, the other members of my delegation arrived, as well as some other people from the Netherlands. It turned out that I was probably one of the youngest and definitely the newest to GA’s like this. Everybody was surprised to see a new member of a MO at an IFLRY GA.

On the first day I kind of followed my other delegate members, who obviously had a lot of experience and knew what to do. They explained about the procedures, which parties were also present and what views they had, so that later that day, when the first session of the GA started, I was prepared.

An IFLRY GA is not so much about debating or making policies. In fact, it is more about networking and getting to know other liberal parties from all over the world. For example, I became very close with several people from Joventut Nacionalista de Catalunya (JNC) and many people from Scandinavian parties, such as Radikal Ungdom and Venstres Ungdom from Denmark. Moreover, I got to know a member of the Junge Liberale from Germany, he lives relatively close to where I live so we agreed on keeping in touch to set up an event for both our parties.

During the sessions and procedures, you learn a lot about what it is like to be in such an organization and how important it is to have a solid guidebook. The agenda that we received a few weeks in advance was realty tight and didn’t leave much room for error. So it was sometimes a bit hectic and chaotic.

Of course, besides the formal sessions, there was plenty of time to make new friends in an informal setting. Two out of four nights, IFLRY organized dinners in the city centre. Of course you could decide to go out for dinner alone, but it is much more fun to go to dinner with 70 different people, all from different backgrounds. I really enjoyed both dinners as I consciously decided not to sit next to Dutch people. By doing that, I learned that politics is not about debating, it is about making friends and helping each other out.

I was lucky enough not to have any classes or work the day before and after the GA. Therefore, my fellow delegates and I decided to go to the beach to get a nice sun tan. The nice thing about these GA’s is that for normal participant, you are not obliged to attend every meeting. For example, there was an explanatory session for new GA participants schedules on Friday which I attended of course but won’t do next time. This means that you can have some time to relax or see something of the city.

IFLRY is a global organization but with a lot of members in Europe. So the previous years most GA’s were organized in Europe. However, IFLRY President Pauline Kastermans explained during the GA, that, most likely, since there are more and more non-Europe members joining, next GA will be organized in more ‘’exotic’’ places. Therefore, I think that for Europeans this is a nice opportunity to travel and see something of the world.

In short, I can say that my first experience at an IFLRY GA was way better than I anticipated. I didn’t know much about anything related to IFLRY, certainty not about what was going to happen that weekend.  What I like the most is that I met so many great people with the same mindset. So if you are not the kind of person who likes to go out every weekend but likes politics, traveling and meeting new people from a totally different background, attending a IFLRY GA is the greatest thing that you can do for yourself.

Niels Bos is a 3rd year European Studies student in Maastricht ( the Netherlands). On Saturday nights he works in a local club, which he really enjoys and where he meets a lot of interesting people. In his free time, like many others, he likes to travel and experience as many different things as possible.