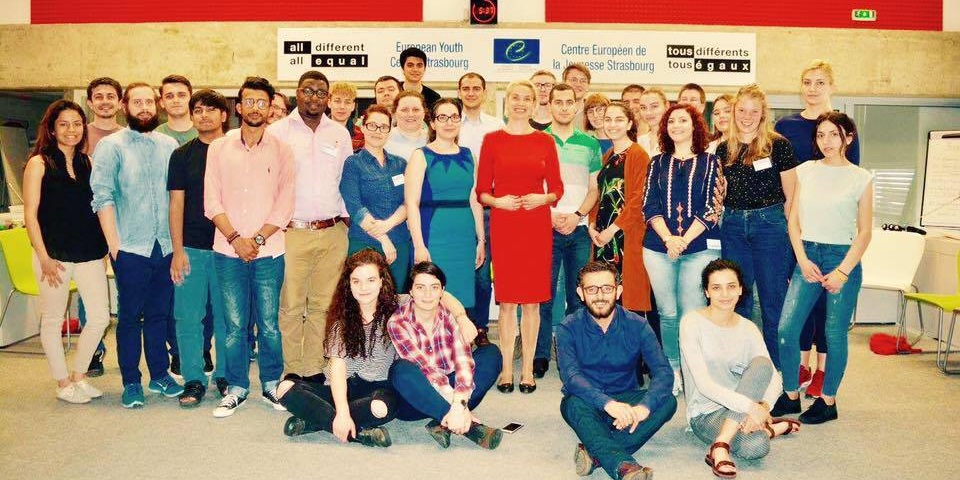 Participants of the study session on youth and migration with MEP Angelika Rosa Mlinar.

The study session on ‘youth and migration’ organized by the International Federation of Liberal Youth and the Council of Europe commenced on 15th May and ended on 19th May in Strasbourg, France. During the week, the participants were given an in depth look into the migration problem faced by Europe. The way of learning was non-formal, which was new to many. However, at the end of the session a lot of the participants admired the concept of non-formal education.

“I have to admit that I want to be a teacher in non-formal education now” –Sevak Khnkoyan (Youth Congress, Armenia)

The participants were from different countries, had different backgrounds and had different experiences to share with the rest. Each participant represented a political organization. I, however, was independent and was probably accepted into the session due to my background and experience with migration.

The European Youth Center, the place of residence and work for the participants was located very near to the European Parliament; in fact the parliament could be seen from the windows at the rear end of the center.

The European Youth Center was easily accessible as it was located just 4 kilometers from the bus and train station and around 15 kilometers from the Airport. However some of the participants had to use the Airports of Paris since the Strasbourg airport is small, and only a few airlines use it. All of the Non-European participants reached Strasbourg by train or bus (from Paris).

The city of Strasbourg is well organized; it has an excellent tram system that runs through all nooks and corners of the city which is why finding the EYC wasn’t an issue, at least not for me. The city is of great importance to France, there’s a lot of history in it since it was one of the first cities to fall during the Nazi invasion in WWII due to the fact that the city is just 4 kilometers from the German border. We were given free time on the 3rd day, which most of us utilized by exploring the city and its landmarks.

“I liked to walk around the beautiful city. I saw the Strasbourg Cathedral and the European Parliament.” –Hamis Kapalila (African Liberal Youth)

Things got busy on the second day, the participants were asked to create a stage drama on real life issues regarding migration. We also had the honor to meet European Parliament member Angelika Mlinar who gave us insights about the refugee crisis and how her political party (ALDE) is voicing the issue in the parliament.

Day 3 was a short day, since the entire day after 1 PM was free. On this day, we were introduced to the No Hate Speech movement which is an online movement by the Council of Europe, to reduce the incidence of bullying, racism and other forms of hate speech online. Many of the participants (including me) were aware of this movement, however, we did not know much about how it actually works before. Furthermore on that day we were introduced to the local NGOs who shed light on the impact of civil society on this issue.

Day 4 was probably the most informative one; the participants were shown a documentary series and were introduced to the World Café. The World café was an opportunity for the participants to relate their backgrounds and experiences with the refugee crisis. The world café was perhaps the most liked event of the study session

“What I liked the most was the World Café because that is when I got to hear concrete ideas about how we can contribute to solving the issue. I really liked something I heard from May (Representative of Future Youth, Lebanon), if I remember correctly. She told me that in Lebanon they are empowering women by giving them tools such as a sewing machine so that they can start their own business and become independent” – Ulla Lovcalic (Liberal Youth of Sweden)

We met the European Youth Foundation on day 5; they gave us an insight about the opportunities available for us to fund our projects which we had assembled a day before. We had the closing ceremony on the same day in which we discussed what we had learned so far. All of us agreed that since the study session was so dynamic and diverse, we had gained much more in terms of experience than what we had initially expected.

“It was a really good and rare opportunity to meet with liberals from all over the world. I have re-considered my thoughts after exchanging many different ideas and experiences” –Baris Erturk (3H Movement)