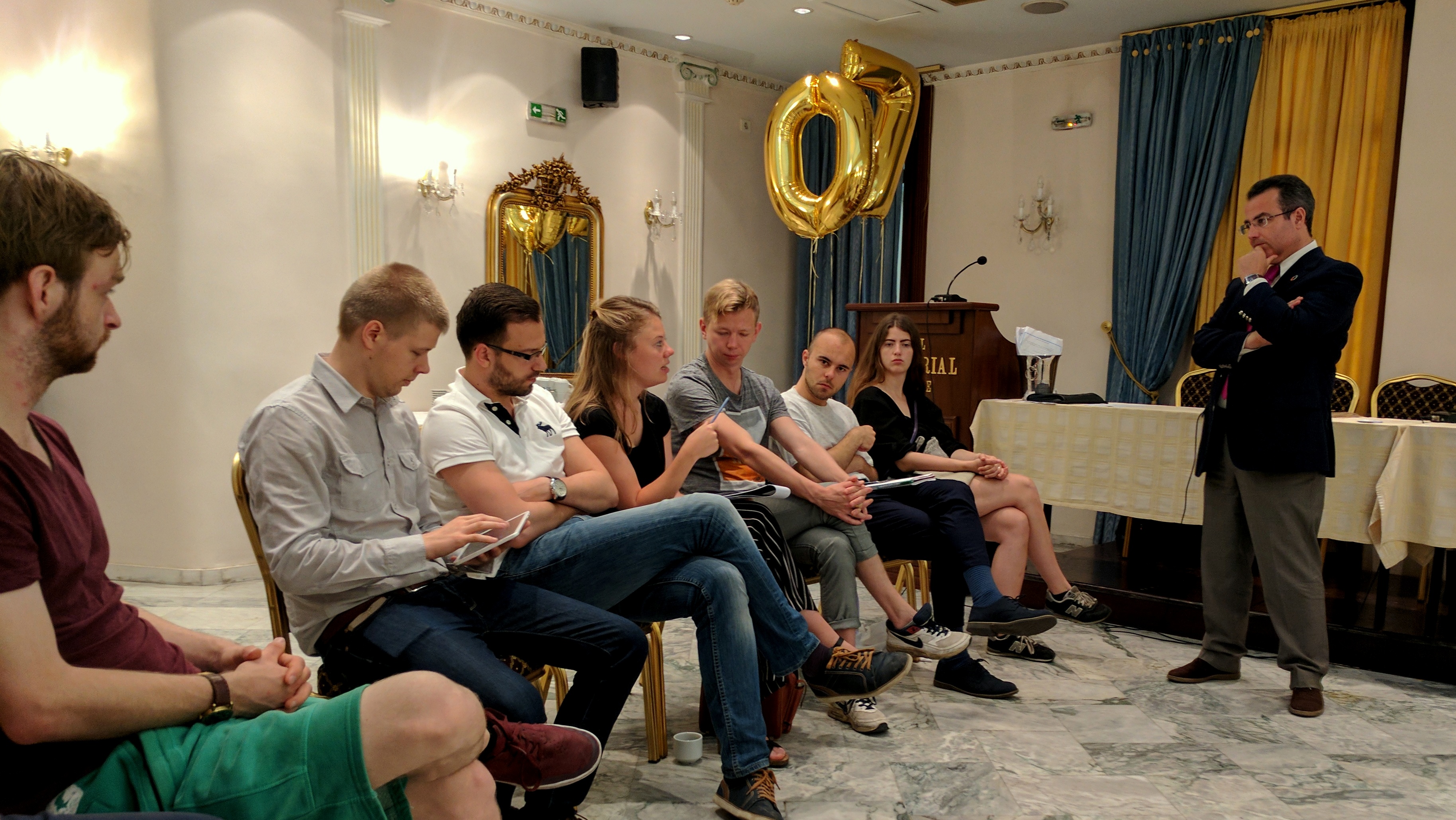 After 3 packed days, IFLRY’s seminar on Youth Entrepreneurship and Autonomy is now finished, and I am the participant tasked with recounting the experience. We did so much, I can’t talk about everything or everyone involved. What I can do is give you some highlights, and maybe provide a bit of an evaluation, gathered from the other seminar participants. And, hopefully, also give you an idea of what these 3 days in Thessaloniki were like. But to do this properly, let me take you back to the beginning.

Sunday the 4th of June is the day, and I’m sitting in the Colombo Conference Room of the Imperial Palace Hotel in Thessaloniki with 15 other young liberals, nursing what can only be described as a punishing, hangover-induced headache. We’d been out the night before to celebrate IFLRY’s 70th birthday, and having just officially closed IFLRY’s General Assembly (GA), a big portion of the delegates were leaving. These goodbyes are always somehow heartbreaking, even if you know you’ll probably see the others again. You’ve eaten together, slept in the same rooms and discussed topics you’re all passionate about – After all, if we weren’t kindred spirits, we wouldn’t have agreed to meet in South-Eastern Europe to discuss what are now somewhat endangered ideals in the political climate. And now about 40 of the original 55 delegates are leaving, so the emptiness is palpable.

I look first around the room at similarly morose faces, then down at the seminar agenda, and can’t help but think to myself, “this is going to be painful”. After all, I’ve been part of projects featuring non-formal education (NFE) several times before, so I have a general idea of what is in store for this group of post-GA delegates. After 4 days of debate on resolutions I’m tired, and I’m already dreading the energizers – like Pavlov’s dog, the mere mention of the word “energizer” is all my brain needs to automatically respond, in this case with resignation and nausea. Suffice it to say that previous experiences of NFE left me unimpressed, so I’m not too hopeful for a seminar that’s been advertised as revolving around that structure.

10 minutes in, we’re playing a memorization game, and suddenly I realize (to my surprise), I’m actually obtaining value from the experience. While I had spent 4 days with these young liberals in the general assembly, names were not really necessary. But now, I knew from our agenda, I’d be working much more closely with these people, and it was time to see them as peers, rather than international delegates of whatever country/political party. The guy I had thought of as pragmatic no-nonsense Dutch guy became Mark; The girl I had thought of as quiet Armenian girl became Satenik; and a fellow I had, up to that point, thought of as a Danish politico was revealed to be Juho, actually from Finland. We all live and learn. At first I was cautious in my optimism – one teambuilding game does not a policy seminar make. But over the course of that afternoon we cured our collective hangovers together, developed a feel for the other members of the group, set out our expectations for the seminar and began to elaborate on the subject that we would soon be developing a policy around: Entrepreneurship. Things were looking up.

Although we were using NFE, I found the progression of the activities comforting. It followed a pattern that was ingrained in me when I learnt about problem solving in high-school or university. Define the terms of the argument; identify different positions; discuss the merits of each of them; and compromise on a mutually agreeable and, critically, feasible proposal. So we discussed autonomy and entrepreneurship; argued over liberal solutions and social obstacles; pondered different stakeholder positions. I won’t go over each and every activity. We had a full schedule until at least 18.00 every day, and our hours were filled with too many discussions and presentations to elaborate on in detail. I will touch, however, on a few highlights. 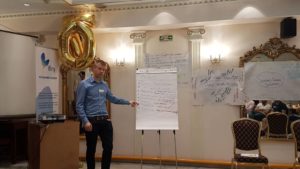 A great activity during our team building exercises was a coin balancing game, where we had to move a broom handle through a spiral track, without touching it with our hands and all the while making sure the coin didn’t fall off the top end of the stick. My team put up a great time of 12 seconds, but we were still left trailing in the dust with after our opponents put up a jaw dropping time of 4.7. Since we were highly focused on developing our own approach, I can’t be sure some sort of sorcery wasn’t involved. But from the snippets I overheard, I suspect their success was due to their longer preparatory period before they ran their experiments. Having spent more time developing the right system, they were then free to constantly re-try the exercise and thus improve their time. On the other hand we had a much more experimental approach, which meant we lost momentum in between trials and never improved our time to a more competitive level. What struck me a few days later was how relevant the exercise was to the rest of the seminar – integral to any smooth-running entrepreneurial venture is a high level of preparation, and this exercise highlighted that fact well.

Another prominent highlight was, undoubtedly, the presentation on Monday morning by Andreas Stefanidis, Accelerator Director for Aephoria Director and Co-Founder of the Academy of Entrepreneurship (AKEP). One of the expectations I had outlined the day before, at the outset of the seminar, was that I’d come away with facts, figures and concrete examples that I could take away with me and use as the foundation for new projects. Mr Stefanidis delivered. It wasn’t just the first-hand insight that he provided to enlighten us on the Greek economic crises. Using projects that he had been involved with recently as examples, he walked through the problem solving process in different industries, providing us with examples of entrepreneurial support networks and programs that we could use, or refer aspiring entrepreneurs too. He also described some common pitfalls that, in his experience, he had seen trip up even relatively experienced businessmen; often advice I hadn’t heard before, but that made sense. Happy to say I walked away with a smile and a business card.

Another highlight for me was a role play, which took place on Tuesday. Having separated in to stakeholder groups to develop our position on a burger restaurant proposal, we all dove into our roles and tried to defend our given positions with reasoning. There were the entrepreneurs, the hesitant parents, the difficult bureaucrats and the overly optimistic entrepreneurial consultants, among others. You can imagine that for young liberals, all of whom believe in the power and potential of entrepreneurship, empathizing with obstructionists over what seemed like a reasonable business plan is somewhat difficult. But the activity not only helped us develop our own reasoning and ambitions for the project, but also develop preemptive counter-arguments for what were likely to be objections raised.

All this fed in to the final task: coming up with concrete proposals for action. We were divided into a few groups to distill what we had discussed into actionable policy and programs. ’ll have to admit that at the time of writing this, none of these are finalized. As part of the policy paper group, I know we’ll be working on it over the next few weeks, in a distributed way, and that the paper will go through a period of consultation with the IFLRY Bureau before we put it to the next GA. But the bones of it, like the other programs we are developing after the seminar, are there, matured from 3 long days of discussion on youth entrepreneurship and autonomy.

Any feedback? Sure. Having the seminar before the GA would have allowed us to consult with the GA delegates in refining the first draft of the proposals and policy papers, and having advanced notice of what our final tasks would be would also have allowed for more preparation in terms of elaborating ideas.

I should probably point out at this point that the ideas elaborated above, from the praise to the feedback, is my own opinion – other attendees were, for example, less keen on the roll-play, or actually really liked the energizers. I know some people wanted more presentations, and at least one attendee who didn’t find the presentations useful at all. We all enjoyed different aspects of the program I guess, but, from what I have been able to gather through my own experience and conversation with others, we all really enjoyed the experience. I think I speak for everyone when I thank Tanya, Ahmad, Nickolas, Nikolay and Sven for making this seminar what it was. Only time will tell how well we succeed in implementing our proposals, but regardless of the outcome, this was a great event to network, debate the future of youth entrepreneurship, and try to come up with a feasible plan of action. And while the task may seem somewhat daunting, I guess a take-away from this seminar, and the spirit of entrepreneurship, is to try; not in the absence of fear failure, but despite it.