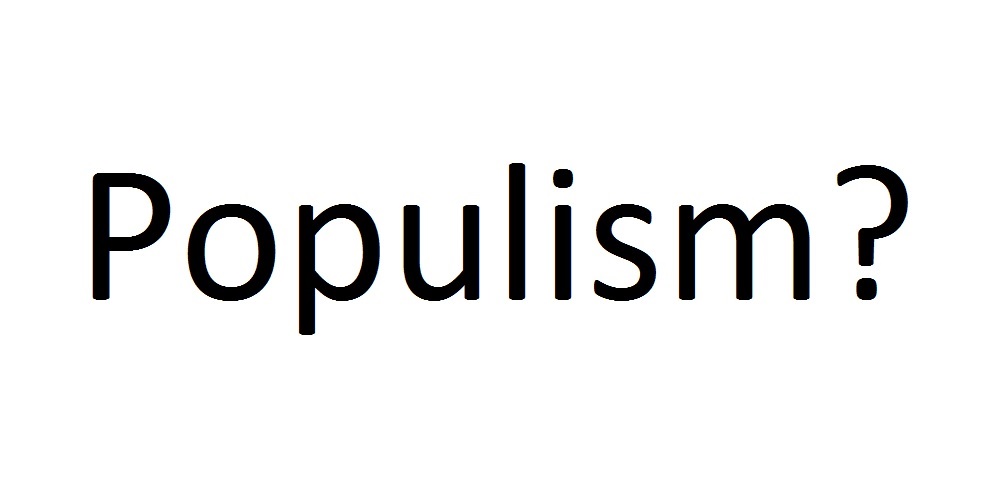 Like the latest organic, sustainable nutritional supplements and shakes, the word populism is trendy. It is hip yet, no one knows exactly what it means. Populism is undoubtedly the most used word of the past year − apart perhaps from terrorism. We can rejoice at the prospect of the use of the word by journalists, talk show guests and politicians during the upcoming period of elections in Europe. The quick and eager usage of the word is helped along by the fact that it does not have a singular meaning. Despite all this, in this essay I will not offer a detailed argument on the how, what and why of populism. My argument will be less profound and focuses more on political reality. I will argue that political courage and willpower is needed, for I postulate that it is about time to start forming governments and coalitions with right wing populists. Not just because this is inevitable, but because this will benefit democracy as a whole in both the short as long term.

Populism has a lot going for it: it is a driving force behind democratisation and gives a voice to societal groups who are not being heard. Although populism is not inherently good or evil, lesser nor better than other political families, due to the connection to extremist and radical right wing politics in Europe, it has become increasingly framed as a mostly negative phenomenon − at least among ‘the elite’. In the Netherlands the Freedom Party (PVV) is implicitly or explicitly being excluded as a coalition party by nearly all other political parties. The same fate falls to the Alternative für Deutschland (AfD) and the Front National in Germany and France respectively. For a lot of democrats this negative frame doesn’t sit well and rightly so, as populism has a strong democratising element after all. It speaks to parts of the population that have felt unrepresented and what more could a democrat want for a democracy to be than the best possible expression of the will of the entire population?

So where does it hurt? What causes populists to be undesirable political partners? The trouble lies in the ways populists try to realise their ideal. On the one hand populists, from left to right, try to label the largest possible group of citizens as ‘the people’. On the other, they play into existing chasms between citizens and divides that run through society. The most well-known of these divides is that between the civilian and the politicians or ‘elite’. Additionally, right wing populists propose another predominant juxtaposition: that of the ‘native’ inhabitants versus the ‘immigrants’. The existence of the first chasm is, at least in the Netherlands, not being contended by anyone. All political parties (perhaps rightly so) accept the fact that there is a growing gap between ‘the people’ and the political elite. The problem democrats have with populists therefore must lie in the second chasm, which characterises the modern right wing populism in Europe. In setting specific groups of citizens apart, such as Muslims, Arabs, Moroccans or other ‘strangers’, right wing populists are usually very straight-forward: they are not welcome in their ideal society. Although the rhetoric of right wing populists is often more vocal, more extreme or more radical than the tone of voice in their actual electoral programs, these notions alone set them apart from the rest of the established political order. Established political parties are willing to accept that there is a gap between them and citizens but dismiss the idea that citizens are divided on a basis of ethnicity or that cultural differences makes groups unwelcome in society. This disagreement is obviously not the only reason cooperation between the right wing populists and established parties has been so difficult but it provides us with insight into the sort of obstacles parties have to overcome.

It seems that a lot of Dutch parties do not want to take the risk. Is that justified? It is evident that right wing populists in Europe appeal to a considerable part of the population or at least tap into a previously insufficiently heard sentiment. A lot has been said and written about the ‘angry white man’, the prototypical base of right wing populists, whose vote is based on disillusion and dissatisfaction. Whether or not this concept is accurate has been debated heavily. Still we can safely say: a vote is a vote, regardless of the motivation behind it. There is an element of discontent amongst citizens who support right wing populists for the presumptuous way other parties disregard their votes as ‘protest voting’ and for not taking the populists seriously as potential partners. Would it be so odd when citizens might not vote for the government parties or their partners when they disagree with their policies? What better way to take those disagreeing citizens seriously than by giving cooperation with their elected representatives a real chance? This approachable attitude also helps dismiss the image of an elite which stands hostile towards the populists and their supporters. Herein lies the short term gain of a realistic approach to working with populists. Firstly it reels in those citizens who have lost trust in established political parties and have put their faith in the populists. Secondly it dismisses the notion of the populists as political outsiders and robs them of the polarising ‘us against them’ frame.

In the long term there are also benefits to be had. To study this let us look at Denmark, the only example of prolonged cooperation between right wing populists and established parties in Europe. From 2001 up to 2011 and again onwards from 2015 the Danish People’s Party (DFP) has been part of a coalition government, in the role of supporting partner, meaning they were not formally part of the government nor held office. During this period the party has become more moderate in its political views.  This is not to say the DFP has become a run-of-the-mill centrist party, but it does show a notable difference in the way the party addresses Muslim immigrants nowadays.[1] At the same time the Danish voters regard the party, after 10 years of coalition participation, as a ‘normal’ government party. Put bluntly, we could say that coalition participation has brought the DFP within the democratic system. A positive change because this has given the supporters of the ideologies of the DFP entry into the Danish democratic system. Democracy has a fundamental interest in giving a voice to its citizens and when this does not happen it opens the way for extremism and movements that would threaten democracy as a whole. In the words of famous fictional politician Francis Underwood: “If you don’t like how the table is set, turn over the table.” By treating populists as serious partners they are forced to adopt serious positions; simplistic one-liners will not hold up during negotiations. This makes the road towards nuance and having to explain policy choices to voters inevitable. On the one hand this makes populist movements into ‘mature’ parties, who have to come up with proper political positions. On the other it shows the populist’s base the reality of politics: achieving consensus means comprising. No one rules alone and simple solutions do not exist.

By taking the voice people lend to populists seriously democracy would be given a new impulse. Voters who would have lost faith in established parties would, through the populists, be held inside the political arena. Simplified political solutions and false dualities will not hold up to political reality.  Established political parties have to reach out across gaps and chasms and look past harsh and unfounded words. This will take political courage. Maybe we should not see the words of the populist as a thrown gauntlet but rather as a helping hand.

Jasper van den Hof (27) gratuated in history at the University of Groningen, specialising in the field of democratic theory and European populism. Previously, he has been an Education Officer on the national board of the Dutch Young Democrats (Jonge Democraten). He currently works as an assistent to D66 at the provincial government in Drenthe.

This article came about with support of the Democracy and Public Governance working group of the Young Democrats. The working group acts as a think tank and forum for the Young Democrats on a range of subjects associated with the ideas and workings of democracies, such as voting ages, lottery and referenda. If you are interested in the working group, or want to know what projects they are working on, feel free to contact the chairman at: ph.democratie@jd.nl.

[1] At the beginning of the 21st century the DFP still regarded Islam as a fascist ideology that would make Denmark into a Muslim state and against which a worldwide war should be fought. Presently the party concerns itself with the economical problems stemming from immigration. The alarmism and noting the dangers which Islam poses towards Danish society do no longer play crucial roles.