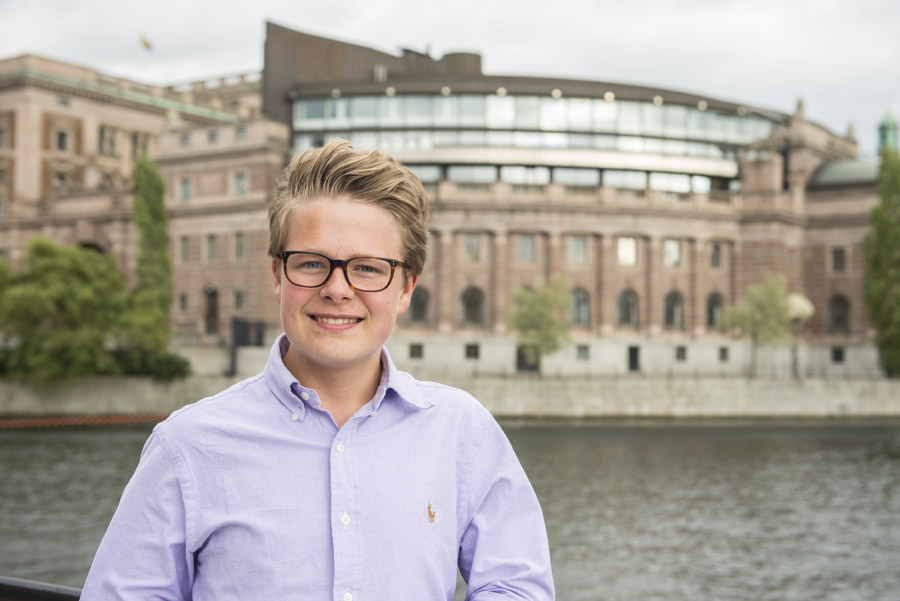 Leo Gerdén in front of the Swedish parliament in Stockholm.

A prerequisite for democracy is the freedom of speech and expression. Even though this is widely acknowledged, we sometimes forget the whole picture. The representation of all groups in a society is not only important for the conversation climate and true democracy, but also to acknowledge everyone’s equal worth. To draw conclusions that are well-founded and substantive, every voice needs to be heard.

I am fourteen years old. I have been a member of the Swedish Center Party Youth since I was eleven years old. During this time, I have written many articles published in some of Sweden’s largest newspapers, worked as a political chronicler and debated political issues on both TV and radio. I have commented political issues for several years. Today, I am president of the Centre Party Youth in Stockholm City. I fight for open borders, against climate change, for young people’s right to freedom of expression and many other issues.

I became politically involved early, at about eight years old. I saw problems in the world, and I did not just want to complain about them. I wanted to change, find solutions and improve society. Political engagement was therefore an obvious choice.

Unfortunately, I have received a lot of criticism for what I am doing. Not for my opinions, not for my work and not for my language. The lion part of the criticism regards my age. People think that only because of my age, my opinions are worth less. Some of them think that I should be quiet and stop talking about politics. I should just play football, study and accept how the world is.

We are the future. We are going to have to deal with the consequences of climate change, a mismanaged economy and closed borders. Young people are affected many times more than most adults by the decisions made by the politicians. We are a big part of the society and therefore deserve to take part in the public debate. According to the Children’s Convention, we are entitled to speak and be heard.

In nearly every discussion, I face master suppression techniques. It is everything from “you will learn when your older”, “in your age, I didn’t know anything about politics so you better stop”, “oh little boy, you have no idea what you´re talking about”, “Go out and play in the sandbox instead” to “Considering your age, I understand that you think as you do”. In too many situations, it’s not my opinions that are in the centre of the debate. It’s my I age and whether I have the basic right of expression as anyone else.

Master suppression techniques are something children and young persons have to struggle with all the time, also in our everyday life. Whether it’s policy or any other topics being discussed, our opinions are diminished and we are told that we are not old enough to have an opinion. Although we are many times more aware, have relevant experiences and facts on our side, a lot of people underestimate our opinions.

I get these comments in person, but mainly I get them on the internet. Adult people make comments using everything from master suppression techniques to hatred, but also expressing serious threats. The same adults that tell me that I´m not mature enough…

As a young person, you tend to be much more exposed. But that doesn’t mean that we should stop young people from writing publicly. Many newspapers and publishers don’t let people under 18 years write for them. They think we can’t handle it, and want to protect us. But that only leads to more stigma and creates a distance between young people and public debate. It´s a very counterproductive way to go and it does not solve the basic issue.

Another problem is the high voting age in many countries. It creates a distance between young people and politics, which isn’t healthy for the democracy. Democracy means that everyone is equal and has the fundamental right to vote. Age can’t be directly translated into intelligence and maturity. The voting age should therefore be lowered to16 years.

The high voting age changes the rhetoric and debate. The political agenda is fully adapted to adults and their issues. Politicians usually debate publicly to win votes, and it will therefore be natural to address the topics most important to the target group, i.e. the ones that are entitled to vote. Young people find it difficult to relate and feel that their problems are not discussed in a relevant way. The proposals and results will therefore be different and will not be relevant to those who are most often concerned.

To all of you who are working in politics, who are elected or work as journalists; you have a responsibility. A responsibility to address these problems, let young people be a part of the party or organisation and allow young people to take part in the public debate, in the political community and in daily debates. Open your minds and let all opinions be heard.

Leo Gerdén is a Liberal Opinion Maker and President of the Center Party Youth in Stockholm City, Sweden. You can reach Leo at: leo.gerden@centerpartiet.se