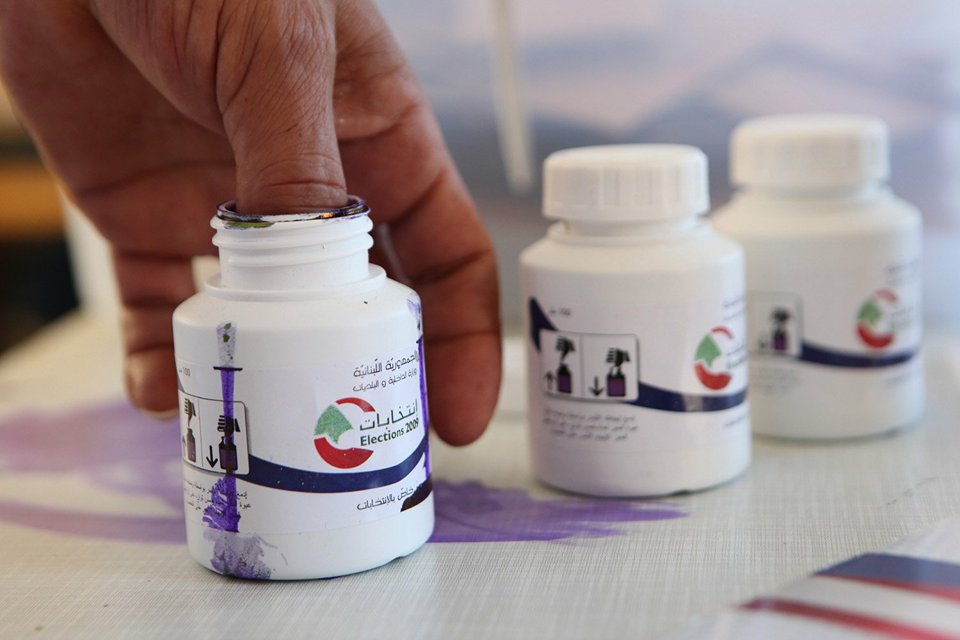 Ink jars used to mark voters, so they can't vote more than once during the 2009 elections in Lebanon.

Last October, the Lebanese parliament elected a new president ending a two-and-a-half-year power vacuum that had crippled the functioning of the government. Just over six months later, Lebanon was drifting into yet another political crisis that could leave the country without a functioning parliament.

Fortunately last month, the country’s cabinet approved a new electoral law, and the parliament announced that Lebanon will be holding the long-delayed legislative elections in May 20, staving off a fresh political crisis that threatened to leave the country in chaos.

The move will also end a stalemate that saw the country’s parliament extend its tenure twice.

The members of parliament were elected in 2009 for a four-year term but have extended their mandate twice, due to instability caused by the Syrian civil war and later the country’s lack of a president.

But the issue at the heart of the impasse – the voting law – is a complicated one.

The last election was held under what is known as the “1960s voting law”. The law granted eleven sectarian group (7 Catholic, and 4 Muslim) a set quota of the 128 parliamentary seats in the Lebanese parliament. Elections were held in 26 different voting districts. Before the election, each party had to put forward a list of candidates that was in accordance with the quotas for the different sects in that district. All the voters in a district, regardless of sect, then had the right to vote for which ever list they preferred. The list with the most votes would then obtain all the seats from that district.

The new electoral law marks a major step forward for the country, as political work had ground to a halt while lawmakers focused solely on agreeing the final text.

In the new law, the sectarian quota system will remain unchanged. However, the number of voting districts will be reduced from 26 to 15. The most important change in the new law is that, unlike the former winner-takes-all system, the new law will see proportional representation implemented within the districts for the first time in Lebanon. Instead of the party with the most votes in a district gaining all the district’s seats, the seats are now divided amongst the different party lists according to the percentage of votes that party gains in that district. In addition, candidates will be able to vote from anywhere in the country – through so-called magnetic voting cards – rather than having to travel to their district.

While no single bloc claimed dominance and the final agreement left out several major points called for by certain parties, it was praised as the first fully home-grown electoral law. It remains hard to predict how the new system of voting – with its new proportional representation, redrawn districts and preferential votes – will affect the outcome.

The 11-month so-called “technical extension” of Parliament’s term is to educate voters and overseers on the new law to facilitate a smooth process.

A deep sense of vulnerability across all the country’s groups forced its political factions to finally agree to the law. Today, all the sects have existential issues as well as electoral one.

Surprisingly, that sense of shared vulnerability has created a renewed, if wearied, spirit of local collaboration. Rather than expecting regional politics to change the status quo in Lebanon, as many factions have done for many years, local parties have decided to make their peace at the Lebanese negotiating table, even if next year’s election could threaten their hold on the country’s governance.

The new law is said to be the first step in the path out of sectarianism. Of course, major players are going to go back and run statistics and numbers and figure out what they want to do, but a new law might show some surprises in the outcome.

May El Masri is a Lebanese political activist, focusing on women’s rights and gender equality. Earlier this year she was elected international officer of the Lebanese political youth organisation Future Youth. Currently she is concerned with the youth policies of Future Youth’s parent party, Future Movement, where she is working to help increase the political participation of young people as well as improved outcomes for young people in elections. You can reach May at:  elmasrimay@gmail.com