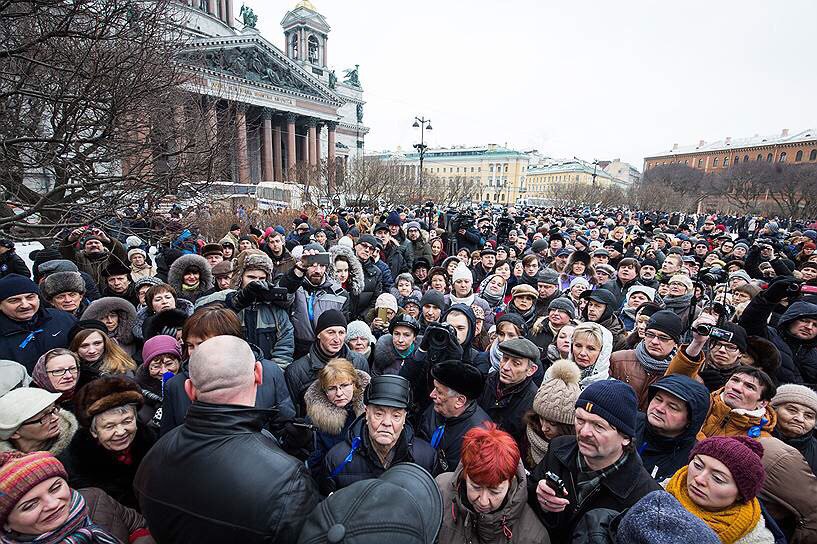 It was a cold and misty February morning, when four thousand people of different ages, professions and religions, who did not know each, joined their hands and formed three rings around St. Isaac’s Cathedral in St. Petersburg. It was the biggest spontaneous street action that has taken place in St. Petersburg in years.

Today, St. Isaac’s – one of the biggest churches in the world, whose golden dome towers are visible from almost anywhere in St. Petersburg – is managed by a museum, set up by the Soviet government in 1928. Before the revolution moved the capital to Moscow, an Imperial ministry had administrated the Cathedral. St. Isaac’s. Until now was owned by the city, successfully combining religious and museum functions, and at the same time bringing to the city treasury about 13 million dollars every year from entrance fees for tourists. However, not so long ago, the Russian Orthodox Church (ROC) has decided to seize the Cathedral, asking the city government to allocate it to the ownership of the church. Without asking the opinion of citizens, the Governor of St. Petersburg, Georgy Poltavchenko, conducted a backstage conversation with the Russian Patriarch and then announced that he has decided to transfer the St. Isaac’s Cathedral to the jurisdiction of the ROC.

At first glance, there is nothing to worry about. However, the decision angered the residents of St. Petersburg. Firstly, now all the funds that the Cathedral earns will go to the ROC, and not to the city budget. However, for example, the restoration of the cathedral will still be paid by the city. Secondly, the Cathedral will become a temple, not a museum, which it was before. And finally, and most importantly: the decision to transfer the cathedral was made without taking into account the views of the citizens of St. Petersburg. The people simply were not asked, but were confronted with a fait accompli.

It should be noted that the ROC has a rather dubious attitude to religion as such. These days it is mostly a tool used by religious leaders to make money. Oppressed in Soviet times, today the ROC is trying to get all they can. The highest dignitaries bathe in luxury. The Patriarch wears a watch that cost as much as a small church and rides in dozens of expensive cars. High church dignitaries buy villas and state assets. Now they have obtained St. Isaac’s Cathedral.

Youth Democratic Movement Vesna held a few campaigns to attract public attention to this issue. We hung a big banner on the colonnade of the St. Isaac’s Cathedral, which said «Not ROC», and a few weeks later we conducted a street action on the stairs of St. Isaac’s. An activist in priest’s cloths was lying on the stairs surrounded by many improvised bags with dollars and he kept placards in his hands saying «I want more».

Meanwhile, two opposition MPs of the city parliament together with urban activists, movements and YDM Vesna called people to come to the rally in defense of St. Isaacs. The meeting took place a week later. About 6 thousand citizens took part, who demanded the resignation of the Governor and the annulment of the transfer of the Cathedral.

However, Orthodox activists were also on alert. A couple of weeks later they staged a mass procession with holy banners and icons of saints around the St. Isaac’s Cathedral. It started a real confrontation of the church and civil society. Despite the fact that the Governor assured people that the transfer of the Cathedral to ROC would unite the society, this step more and more divided citizens into two camps. Ordinary people

collected signatures against the transferring of St. Isaac’s, but the church accused them of obscurantism and brought down with insults, calling its opponents infidels and apostates. The climax of the people’s protest action was the “Blue ring” (the symbol of the Cathedral’s salvation became a blue ribbon), when thousands of citizens of St. Petersburg, joined their hands in a triple ring around the St. Isaac’s Cathedral.

Today, the protests around the Cathedral continued gaining new strength and weight. We are not against religion, not even against the ROC. We protest against the decision-making mechanism in our country, which is long established, in which the opinion of citizens is worthless, since one person (in this case the Governor, who obtained his position through elections riddled with fraud and irregularities), decides the fate of the Cathedral, which belongs to all the citizens of St. Petersburg and Russia. This is not the way things should go, and we are certain we will manage to get this decision reversed.