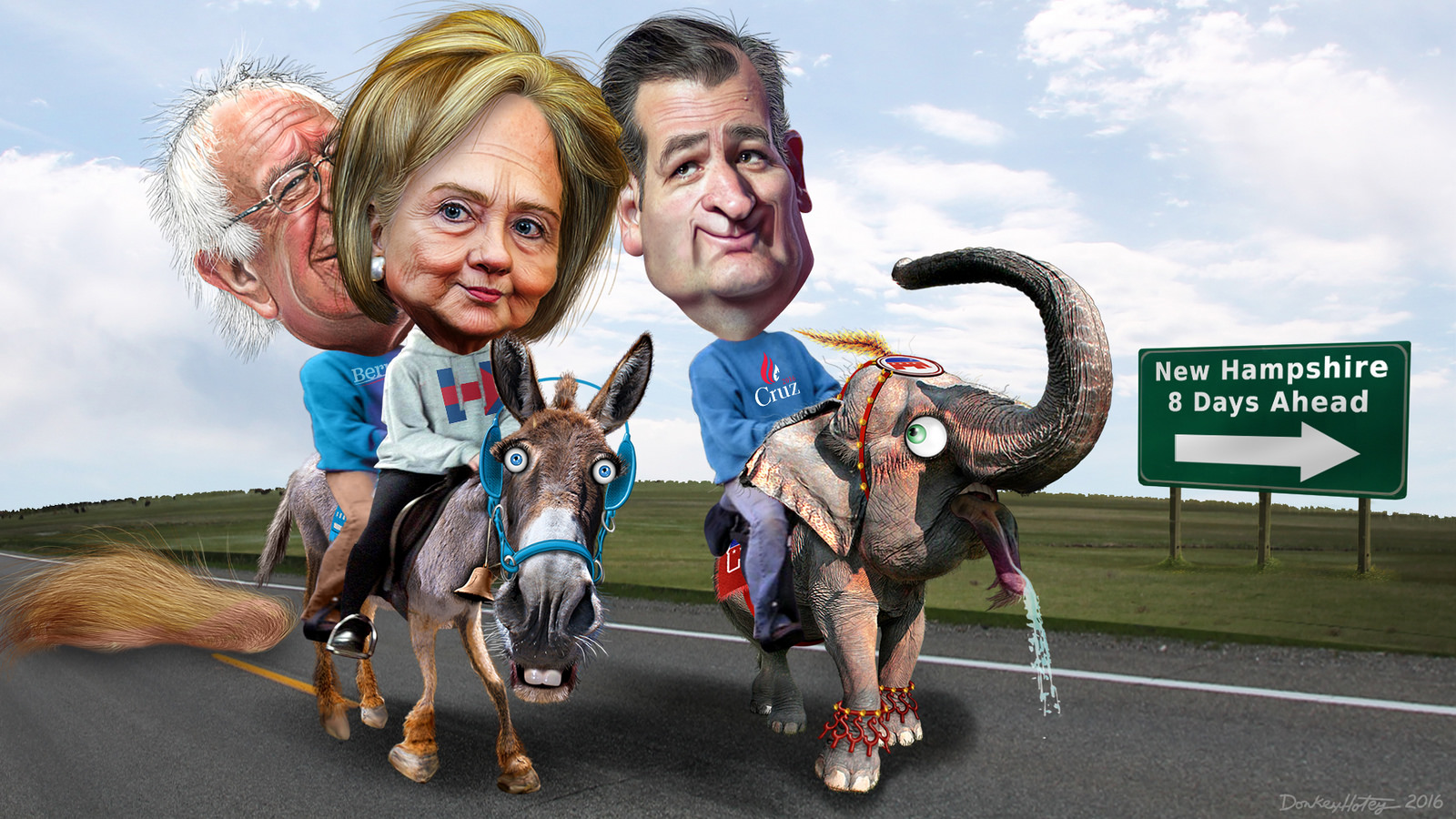 No one votes in America. We all complain, we all speculate, but registering to vote 25 days ahead of schedule, driving to an elementary school after work – we won’t do it. Americans don’t vote, at least half of us.  In 2012 (a presidential year – these have high turnouts) saw only 54% of the population vote, by International Standards that’s almost nothing. This is important to note, as it makes a huge difference with predicting the outcome of an election. While a candidate might be polling well, there is no guarantee that those polled will come out and vote. That’ what makes it interesting.

America has a ‘gold standard’ when it comes to polling, the Bloomberg politics/the Des Moines register, but even the register has put out an exception in the predicted outcome. While Hillary and Cruz are set to win with the party die-hards who regularly show up to caucuses, there is a good chance Trump could overcome Cruz. Both Trump and Bernie are Second-Tier Candidates for the caucus (both possibly for single-payer health insurance) and they poll highly with people who call themselves independents or consider themselves moderates. This means that there might be an unexpected turnout of moderates at the caucuses which could tilt the favor towards second-tier candidates who have focused more on getting the popular vote to the caucus rather than focusing on regular caucus.

It might sound like something of a long shot, but if there is anywhere this might happen it’s Iowa (one of two states who saw an increase in voter turnout in 2012 vs. 2008). This means that more people registered by the 25th of October, and showed up to the polls a month later in 2012, making Iowa a perfect state to get middle Americans to show up for a three hour caucus. You also don’t have to register to attend, you could be a card-carrying Republican and show up to vote against Hillary Clinton. This is a huge deal. Iowa thins out the nominee pool and is fairly accurate in determining who the Democratic nominee will be. Meaning this was a defining moment for our Second-Tier Candidates. We could see a huge turnout for Bernie, and although Trump did better in the polls, no one voted for him. For both second-tier candidates the upcoming caucuses are in more favorable states, which means Bernie could still pull ahead.

A near draw of the Democratic candidate means that even though Hillary technically won Iowa, there is still hope for Bernie (Hillary won by a coin toss in 6 counties). It also means that there is expected to be a larger voter turnout to the caucuses in other states. This is important, because although it was a near draw in Iowa, Bernie has consistently done better in New Hampshire by a significant amount.

Why Does it Matter?

Defining moments here. If Bernie had lost in Iowa, New Hampshire would also sway towards Hillary, but with the near draw, it means Bernie will overcome Hillary in New Hampshire. That’s a huge deal when looking at Hillary’s support. Which is full of a lot of “may-be voters”, in order to overcome Bernie, she would have to focus on South Carolina’s strict voter restrictions and get the “orphaned” voters to show for her. This shouldn’t be too hard considering South Carolina’s sketchy disenfranchisement history.

The Iowa caucuses are a defining moment in American politics, for people who want the option of keeping the affordable care act, for people who stand against war, for people who have epileptic children and had to move states. Second-Tier Candidates are less important, but with the polling numbers drawing infinitely closer, if Bernie came out ahead of Hillary, it would mean a change in American politics. It would shift our focus from “building walls”, “stopping the world’s evil”, and “reducing deficit by decreasing spending”, to a focus on human lives.

Are We Really Sure it Matters?

Iowa caucuses may seem like a small part of the grander scheme, but it is the first step to the presidency, and can be a good indicator of the future. While #CaucusForBernie is trending, and the most shared thing on the internet in the last 24-hours is a donate to Bernie page; there is hope that America will have our own Iron Lady and it’s still up in the air if we will elect our own little baby Nero. It matters because the Iowa caucuses are the first indicator if my neighbors will chose to fund tanks or trains, if they believe in the benefits of a healthy work force or think that incentivizing medium sized companies is too taxing. I’ll let the ending of every

Huffpost article about Trump tell you why we don’t need him, and why this vote matters. It tells us that even though our parents, aunties, and neighbors might thump in agreement to Trump on their television, they might not vote for him.

There are also some serious social consequences that could occur if Hillary is up against Trump. Trump has more support from the middle “moderate” Americans. He also has more personal money, which he has vowed to use if the numbers look good. If Trump wins, as a nation, we could be looking at travel boycotts, which would harm our economy, and the places we are no longer allowed to go. It’s not unrealistic to say this, as the UK and Germany both had petitions large enough to warrant public discussion about banning Trump.

I have a lot of hope for the future, for America, for the world, and for everyone in general. That’s why this election matters, because it means the future of almost our next decade (we rarely switch horses mid-stream. We let Bush-43 go two terms!). It also defines the way Americans think about themselves, their country, and their ideology. I hope we don’t define ourselves by Trump. The Iowa Caucuses tell us who will not be running for the Republicans, and they tell us who will probably be running for the Democrats. It’s important for the second-tier candidates, and it gives us hope for Bernie, and fills us with fear of Trump.