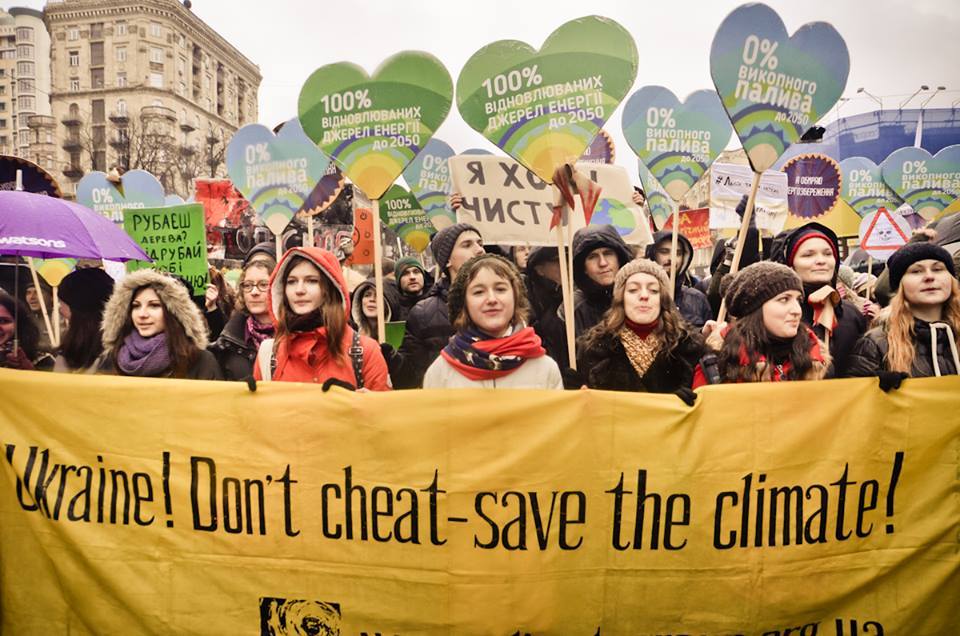 The consequences of global climate change are increasingly felt in Ukraine. Over the past 20 years the average annual temperature has risen by 0,8⁰C, and the average temperature in January and February by 1-2⁰C. This has led to changes in the rhythm of seasonal events: spring floods, early flowering and decreased levels of snowfall. Due to climate change, the weather in the region has become more stringent. About 20 thousand rivers have disappeared, threatening the Shatsky Lakes.

Droughts and floods are not only more frequent, their destructive effect increases, as do the consequences for the economy: floods along the Danube in 2005, on the Dniester and in the Odessa region in August 2008, drought across Ukraine in 2007, a record snowfall in the west and center of the country in March 2013 and in December 2009 in the south and in Crimea.

What is the main objective of the Paris Treaty?

15 March 1999 Ukraine signed the Kyoto Protocol, only a small number of developed countries made specific climate commitments .  These included most OECD countries and some countries of the former Soviet Union. Almost 20 years ago, the decision seemed justified. However, since then the global economic system has changed significantly, and relatively wealthy states such as South Korea or Saudi Arabia, can no longer position themselves as “developing countries” and evade environmental commitments.

Even more absurd, even though China is the biggest destroyer of the ozone layer according to experts, it is trying to avoid climate initiatives. Therefore, the Paris Agreement includes new commitments for countries whose economic status has changed since the days of the signing of the Kyoto Protocol. The main objective of the new agreement is to keep the increase in average world temperatures to within 2°C. and try to reduce it to 1,5 ° C. The temperature increase of at least two degrees will have serious consequences for hundreds of millions of people.

This is not limited to the next spring floods, forest fires and droughts in the summer for Ukraine. In particular, the water will flood numerous island countries. In the mountain states such as Tajikistan and Kyrgyzstan, glaciers will melt. African countries, which emit the least amount of greenhouse gas emissions, will suffer the most. Here, the the already serious problem of a shortage of drinking water and food will be exacerbated.

What are the commitments undertaken by Ukraine?

For the next 15 years, Ukraine has promised to limit its annual production of green house gasses to a maximum 60% of its emissions in 1990. This decision is ambiguous — the trick is that currently, Ukraine emits annually only about 40% of the emissions it emitted in 1990. Therefore, if you take the current level of emissions as100%, the Ukrainian plan would allow for an increase of  43%, compared to current levels.

So, now Ukraine ranks 9th in an anti-ranking of the 15 most polluting countries, in comparison with 1990 — occupied 5th place. According to experts of the National Ecological Centre of Ukraine, the country will not increase its emissions by as much as the commitment allows. In order to achieve this, Ukraine would have to freeze the development of a sustainable economy, refuse to develop renewable sources of energy, and refuse to create any environmental policy. Therefore the bracket of 60% is only a strategic decision of the state leadership, which hoped to preserve the quota principle in the new agreement, and simply chose the safest option.

What else should we be fighting for?

But for me it was important to know how much society wants quality changes. After all, small steps (energy-efficient homes, sorting and recycling, abandonment of fossil fuels, etc.) lead to global results. A Climate change march, which took place on the eve of COP21 was supported in many cities. It was a pleasant surprise to see the active support of Ukranian society. oalition organizations for activities were formed. Many experts joined the working group of non-governmental organizations on climate change. There is still a lot of work to do. There are questions concerning human rights, gender equality, and the fight against corruption.

And despite all Ukraine finds itself at 46th place in The Climate Change Performance Index, while a year ago it was in 30th place. Ukraine has lost 16 points. Therefore, another task should be the reform of the state system to enable it to adapt to future climate change challenges.