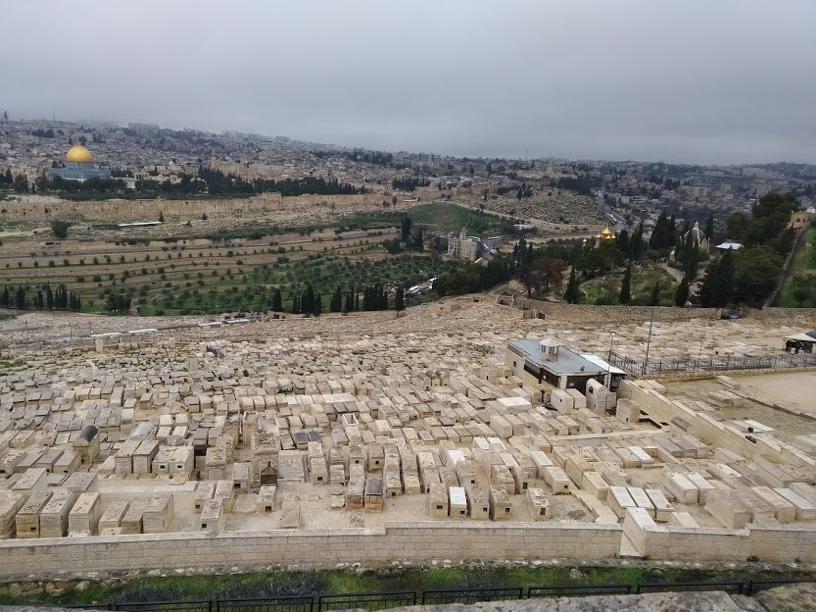 Jerusalem seen from the Mount of Olives.

I came back from my trip to Israel and the Palestinian territories exactly one week before writing this. During this week I did many other things, but none of them would have prevented me from starting to put my thoughts about the experience down on paper. Instead, what prevented me from writing down my impressions, is that everything I thought of writing did not feel adequate to capture what I witnessed. That is not to say that the experience was life-changing, or that the conflict possesses the intractable, almost mystic quality that most of the time seems to be associated with it. It is perhaps exactly the opposite: that the conflict is so laden with emotion that what you see on the ground is almost a let-down. On both sides, people live their lives: they go shopping, they go to school or to work, they have families.

At the same time, I don’t mean to imply that the existence of conflict in the region is not visible. What is noticeable immediately upon arrival at Ben Gurion airport in Tel Aviv is the heightened security, the thorough questioning and lengthy passport control. This experience is not the same for everyone, with the Americans in our group being mostly just waved through, whereas those with an Arab family background having to go through extra security. Giving the geopolitical realities in the region, however, this is not necessarily surprising. After the airport, and within Israel proper – meaning within Israel’s internationally recognized borders – the visibility of the conflict fades, with security guards and the military no more visible than in most European cities. While there are already checkpoints and more security personnel in the Old City of Jerusalem and around the Holy Sites in the city, this is still not excessive when keeping in mind the religious and political significance of the area. When going into the West Bank, of course, this changes somewhat.

There are several checkpoints on the street as we make our way to Bethlehem, although we go through them without being stopped. Whether this is by chance, relatively normal or because our bus has an Israeli license plate, I cannot say without speculation. There are also checkpoints in the old city of Hebron, where we have to wait for several minutes to get through each time, as the Israeli soldiers manning these checkpoints sometimes close them at random. Without wanting to downplay the effect this has on the local population having to pass them every day, they are more an annoyance than threatening. The visual testimony of the conflict indicates a clear power disparaty, with the outward consequences of the conflict much more prevalent for one side than the other.

Yet this can also be somewhat deceiving, and it can be easy for us to blindly follow one side, or one narrative. It is easy for us to evaluate the conflict in the simple terms of ‘the mighty oppressor’ and ‘the innocent oppressed’, it is easy for us to ask for the apparently more powerful side to change its perspective while not expecting the same from the other. Power and strength, especially in the historical conflict around Israel and Palestine, are often not just there, they emerge in the course of a conflict and in the course of history. Again, I do not mean in any way to imply that people that are oppressed or that are born into an underprivileged environment are to blame for that or are responsible for that – they most certainly are not. But we need to recognize that conflict is not just what is outwardly visible, it is also deeply entrenched on the inside for both (if we assume that there are exactly two) sides of the no longer just metaphorical wall.

The program for this particular trip was organized as an inter-faith dialogue between Christians, Muslims and Jews (with the Israeli and Palestinian participants only meeting in the second, upcoming part of the program). The experiences we had and the conversation partners we had were as balanced as possible in a context where, the recognition of the existence of one particular perspective itself can be interpreted as an imbalanced approach. We met Rabbis and students at a school that is part of Reform Judaism, Christian and Muslim Palestinians, Arab Muslim Israelis, Arab Jewish Israelis, visited an Orthodox Jewish settlement in the West Bank, spoke to an anti-military Israeli and a non-violent Palestinian activist. What struck me about all the meetings we had was how friendly and welcoming, but also how ‘normal’ everyone was. At the same time, it was disheartening to see that of the participants that came to visit, not all took away a wholly balanced perspective, but at times rather seemed to reinforce pre-existing notions, despite many more neutral assessments having been discussed during our stay. While it appears almost impossible to bridge the differences between the different camps – be it in the region itself or amongst us who witness it from the outside – the shared humanity of those living in the conflict every day and their shared desire for peace nonetheless may be a reason to put our hopes in the future.

Larissa Saar is a member of the German Junge Liberale (JuLis) and has been regional coordinator for the Middle East and North Africa (MENA) region for two years. She is currently doing a Master’s in International Peace Studies at Trinity College Dublin, Ireland. You can contact her via email: larissa.saar@julis.de