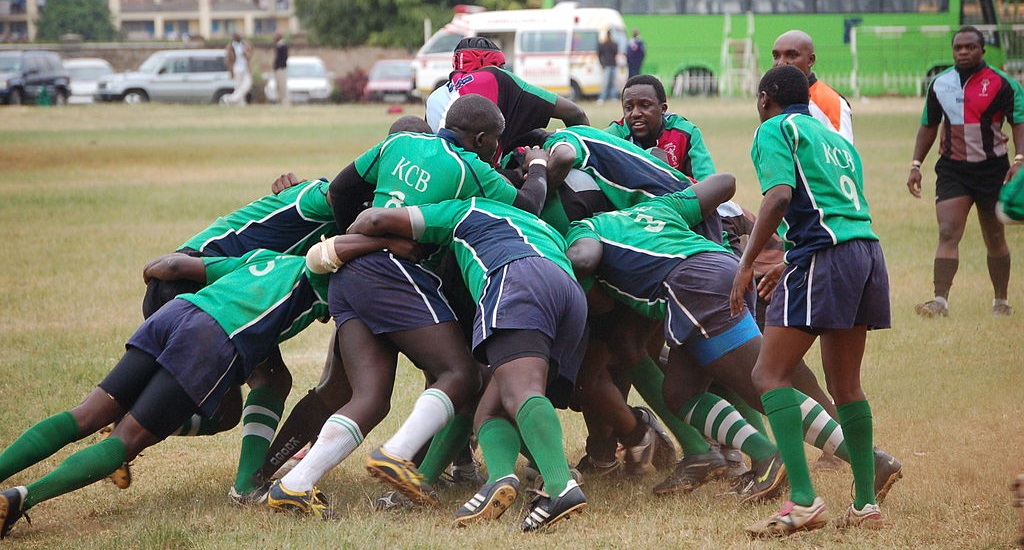 KCB Rugby Club at a match in Nairobi, Kenya

African governments are immensely talented at killing efforts by private companies to economically empower young people. These companies offer a platform for young people to acquire skills, develop ideas, interact with seasoned entrepreneurs and grow their star-ups and talents. Most of these companies have socially uplifted the lives of thousands of young people in Kenya in the process, increasing their hopes of making a living from their talents.

Yet in its 2016/2017 draft budget, the Kenyan government made an attempt to slap the betting industry with a whopping 50% tax. This move was welcomed by its proponents: top officials in the ministry of sports that thrive on corruption.  The officials cited alleged perpetration of unclear social evil by these betting firms. At a press conference, the sports and culture cabinet secretary, Dr. Hassan Wario, urged the betting firms to withdraw direct sponsorship and channel money through the ministry of sports, for sponsored teams.

Such directives are one of the government’s methods for plundering monies from coffers meant to support sports teams in Kenya.  Betting companies that do not comply with such orders are considered persona non-grata by government and will soon be de-registered on baseless grounds. According to the STAR newspaper, Wario, following the mismanagement and corruption within government that marred the RIO Olympics, ordered disbandment of the National Olympics Committee of Kenya and transferred the mandate to Sports Kenya.

It is alleged that up to 88 million Kenyan Shillings (77.000 US Dollar) meant to cater for the teams playing in RIO, was embezzled by top officials in the ministry. One would argue that this scandal is justification enough for the government to desist from meddling in the affairs of the betting firms in their attempt to support sports teams which the government has through this scandal and others, recorded an epic fail.

Kenyan young stars in various sports get a chance to gauge their talents against the top world champions in other countries, courtesy of the firms that government is advocating to be killed. Sincerely, a failure in legislative and regulatory role of the government cannot be an excuse to deny young people this kind of opportunity. It is the government’s role to protect young people from alleged exploitation by these firms in a manner that does not kill the goose that lay the golden eggs.

It is important to weigh the impact of the proposed heavy taxation to counter alleged social evil vis a vis the magnitude of positive results generated by these firms that directly affect the lives of thousands of young people directly or indirectly benefiting from the efforts of the firms by getting a platform to discover, develop and earn from their talents. Even if these firms would close, young people would still be able to access betting services digitally, unless they are forced to close down globally, which is a very unrealistic prospect. Remember, other jurisdictions are welcoming such investments. Considering the fact that the government has not done much to support sports in Kenya, if betting companies are heavily taxed, they will reduce their spend on sponsorship or abandon them all together.

This harassment of betting firms by government, if not checked, means that football (FKF, KPL), basketball (BAK), rugby (KRU), motorsports (KMF), boxing and kabaddi teams and leagues, which receive millions of shillings towards improvement and sustenance of the sport will languish in problems.

With the entrance of betting firms, players and participants in these leagues have been receiving timely allowances and support. They can focus on playing better and the quality of the games has remarkably improved. Through the impact created by betting firms, clubs have also had quality players from outside the country register their interest to get more involved in the local leagues. Players no longer go hungry, as used to be the case, when government was solely in charge of financial support for local sports.

Belinder Frenny Odek is a graduate of Bsc. In Communication and Journalism from Moi University in Kenya. She is a pragmatic change maker who is interested in good governance, education, individual liberty, free markets and entrepreneurship as a tool for a peaceful, prosperous society. You can reach Belinder at odekbelinder@gmail.com.