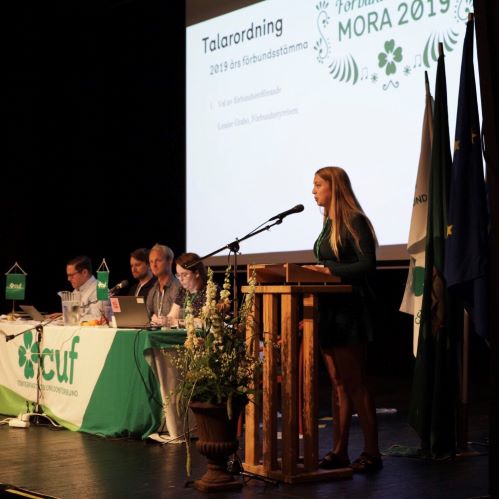 1.On your blog, you introduce yourself as a farmer who grew up in Vara. How did you start your activism and become involved in CUF?

In my campaign for the national elections in 2018, I called myself a “bonntös” (which would be translated to farmer’s daughter). I grew up on a farm with the mentality of “if you want anything done – you need to do it yourself” and an enterprising spirit. When I was 10 years old, I started a campaign to make a bicycle path so that I and other kids in my community could bike to school. I talked to politicians, journalists and got the other kids onboard, so that the local politicians finally decided to build the bicycle path. After that, people knew me as a young engaged girl who could make things happen. Getting into politics and joining the Centre Party was a natural step seven years later.

2. You were a representative of IFLRY in Madrid at the COP25 and a participant in many events. Can you share the most memorable events connected to IFLRY and your activity within the federation?

My most memorable event was the female leadership program in Cape Town in 2019. Together with amazing women from countries like Morocco, Jordan, South Africa, and Ghana, we examined liberal ideology and received training in debate techniques, writing, and public speaking to become better leaders. The best thing was to meet these other amazing IFLRY girls, discuss the challenges and possibilities that are very similar even though we’re from different backgrounds and different countries.

We’re a small town on the west coast of Sweden, one hour north of Gothenburg. I am one of the youngest members of the council and one of the most liberal ones. I mainly work on issues that young people think are important. For example, how we can create good schools and job opportunities, and how we can be progressive to attract more citizens  to our small town.

4. 2021 has started for you with the appointment to Maktsalongen. Can you tell me a little about how Maktsalongen operates?

The backbone of our activities consists of an annual mentorship program that provides 20 women with a mentor, another female leader who will help them reach their goals during the year.

We also have other projects – for example, we have created books and material for women to manage stress. In Sweden, we can see that young female leaders in civil society work so hard when they’re in their early 20’s that a disproportionate amount of them can’t cope and hit a wall before they even graduate from university. We want to give these young female leaders the tools so that their engagement can be sustained.

5. What countries suffer the most from gender inequality?

Gender inequality is a huge problem, which manifests itself in different ways in different parts of the world. To overcome these problems, women need more freedom from various constraints – that’s why I’m a liberal feminist. Freedom over your body, the freedom to become what you want to be, and economic freedom.

6. Does the feminist movement still show strength and promise, or do you see it becoming more contentious and divided in the coming years?

The global feminist movement is stronger than ever, but we can never take it for granted. For example, gender equality is growing in many regions – never have we seen so many female leaders in top positions in politics and business around the world. Women have more freedom, power and resources than ever before. At the same time, when liberal democracies are dismantled, women’s rights are one of the first things that loses ground. Therefore, we must safeguard the rights that women before us have fought for.

7. Could you describe how the principle of gender mainstreaming influences Swedish society?

Even though the Swedish government calls itself the “first feminist government in the world”, we are still lacking in some aspects. For example, we have never had a female prime minister and the top positions are still being held by men. This is affected by gender mainstreaming. Female leaders are assessed in different ways than male leaders, they are judged more by how they are dressed, how their family life is going and how they appear in media and social media. Male leaders rarely get the same questions about their private life – for example, how they have time for their kids while being a leader – but female leaders are often asked questions about how they can manage the role of being a parent and a leader at the same time.

8. How would you describe the future of feminism?

Hopefully, feminism will not be needed in the future. Hopefully, we will have a meritocratic society where men and women have the same possibilities to become great leaders, entrepreneurs or whatever they want.

9. Another part of your life is connected to digitalization and financial technology. You were elected as the President for the Digital Transition and Single Market Observatory. Could you please describe challenges people are facing now especially in the period of a global move online due to Covid-19?

One of the European Commission’s prioritized questions the coming years are sustainability and digitalization. The European Economic and Social Committee (where I was elected as one of the Swedish members in 2020) has started a new observatory connected to digitalization, which I’m honored to lead. But we are also going one step further and will be focusing on new phenomena and technologies and how the EU can become world-leading in new technologies and using them to combat challenges such as climate change. For example, in 2021 we will focus on Artificial Intelligence, since the Commission will publish a new white paper on the topic.

In the observatory, we work with how new policy on digitalization can be competitive, but at the same time safeguard privacy and strengthen society overall.

10. Do you have advice for activists on how to fight for liberal values in the digital world?

The digital world has given us more opportunities to interact and spread our values worldwide. With an open internet, we can support democracy movements in places like Belarus and Hong Kong, we can get information about how Uighurs are treated in China and take action to promote liberal values. But one big risk with digitalization is that it also provides authoritarian governments with the tools to restrict free speech. For liberals, the focus should be to fight for an open internet where freedom of speech and integrity are the most important values.