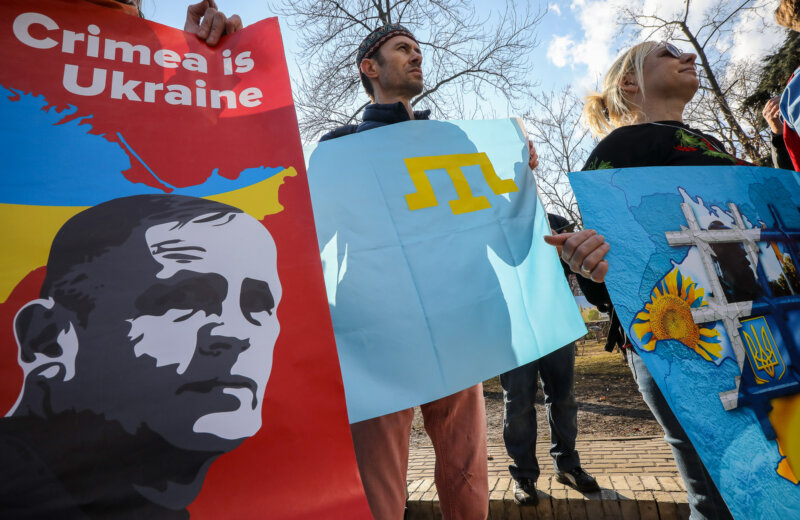 Every Ukrainian has a certain story about Crimea. For everyone, Crimea was part of a family tradition, of shared memories with dear people, a part of family history. And, accordingly, the loss of Crimea has probably brought pain and sad feelings to every Ukrainian as if a piece of you was taken from you.

I am no exception. Crimea was part of my family history. The village of Novoozernoye on Crimea on the shore of Lake Donuzlav is the place where my mother’s family grew up, where I grew up, the place where my grandfather is buried, and where my dear grandmother lives now. Therefore, when the events of the Crimean Spring began, the life of our family seemed to be divided into “before” and “after”.

Our village was a military base for the Ukrainian Black Sea Fleet. In early March 2014, in many cities and towns, especially where the Ukrainian military was present, “Green soldiers” began to appear. On March 2, they appeared in our village. There were four KAMAZ vehicles of armed men without identification marks. They settled around the village and started digging trenches around our military base. In parallel with them, the naval base began to block the Russian ships. On March 4th, to prevent the Ukrainian ships from going to sea and heading for Odesa, the Russians sank two of their ships. On the seventh, at the exit to a small bay with once clean water, the third was flooded. The fourteenth sees the fourth ship lost. The Russians had provoked an unsafe ecological situation. And our military remained blocked in their military unit. They were given aid and food by the residents of Rovna and the Crimean Tatars, however, among the inhabitants of the village itself, there were predominantly pro-Russian sentiments. The organization of the so-called referendum had already begun.

The referendum was held, our ships were declared Russian, and began to prepare for their capture. The sailors on the ships demanded a clear evacuation plan from the Ukrainian leadership. The Russians made several attempts to seize Ukrainian ships, but these attempts were repulsed. In order to prevent confrontation, it was forbidden to open fire on the Ukrainian military. And they remained defenseless in front of the Russian invaders, armed to the teeth. On the 19th of March, the Russians captured the military base. The gate to the base was bulldozed. An aggressive crowd of peaceful people with a Russian priest immediately entered the territory, and the Russian military followed them. The Russians blocked the vehicle exit with the cars of local activists. Soon the Russian military deployed machine-gun points on the beach. Three ships soon surrendered to the Russians: there was no longer an opportunity to leave the bay or get food, and the commander of the military unit went over to the side of the occupier. Of all the ships based in my village, the Cherkasy tried to break through the blockade, but at the exit from the bay, it was captured by Russian special forces.

Subsequently, some of these ships were returned to the Ukrainian side, but the rest of the equipment and some ships remain captured.

In the village, the structure began to change, passports were forcibly issued, the military arrived at the base – they had to be quartered, so obtaining Russian documents became a certain guarantee of the preservation of housing.

All this time my grandmother was in the village. My parents decided to leave me in Odesa, at the time of the beginning of the Crimean spring. I arrived in the village itself at the end of May of 2014. The road to the village went through Simferopol and Evpatoria. What needs to be remembered is the huge number of military men and “people’s self-defense”, many bearded men in Cossack uniforms, many of whom either went to Donbas or came from there. The Russians had already begun to change the village. They had already erected new monuments to the newly minted heroes, already destroyed inscriptions or tablets in Ukrainian. When I arrived in the village, these plates were the first thing that caught my eye. Signs and an empty town. There were no tourists and vacationers at all. There were a few military men, there were young people with Russian flags on their T-shirts and a military-patriotic camp was set up near the village, over which Russian flags, as well as the flags of the DPR (Donetsk People`s Republic) and LPR (Luhansk People`s Republic), were flying. What is surprising is that after trying so hard to capture the base and ships, after the capture, the Russians did not even try to preserve or maintain its condition. The base was half abandoned. All this, together with empty streets and already rising prices, did not make a very good impression.

The people themselves have changed a lot. My village friends now did not want to know me, because I was a Ukrainian. The children played war games, but the Ukrainians were called “bad”. Already at their age, they hated me and Ukraine, although just a couple of months ago, everything was different. At local holidays, officials who once congratulated the townspeople on Ukraine’s Independence Day and made motivational speeches, now, as if nothing had happened, scolded Ukraine and glorified Russia. From all sides of our village the Russian anthem was heard, Russian flags, and some incomprehensible propaganda banners displayed, and posters were carried. On the Day of Russia, there were journalists in the village, the authorities drove the local children into the square, including me. It was necessary to smile, hold a huge tricolor and sing “Russia is our great country.” I remember that then for the first time, since the beginning of these events, I burst into tears.

TV, news, and gossip began to take an important place in life. A huge amount of propaganda came from the Russian news. People believed that on the streets and transport it was already clear who everyone was demonizing. In the village library, Ukrainian literature was written off, and replaced with “new Russian classics” about the heroism of the Russian military. All this seemed to me as stupid and strange as if all ordinary people in my village suddenly had become insane with regards to patriotism. At the same time, the beaches were closed, there were no tourists, prices were already starting to bite, and the water after the ships flooded in the bay has still not been completely cleared.

In my story, there will be no heroic narrative about resistance: it was mainly Crimean Tatars who resisted the Russian invaders, but in our village, there were almost none and they were not particularly loved. And I was too young to remember anything more or to do anything more. However, the consequences of the occupation are dire for us. Our family was divided into two parts. We stopped communicating with a huge number of relatives because of their unwillingness to contact the “Bandera” (a disrespectful name for people who support Ukraine, named after Stepan Bandera, Ukrainian nationalist of the mid-20th century). Of the people close to me, my grandmother remained in Crimea, she remained there all alone. We cannot come to her, nor she, because of her health, to us. Therefore, every day we hope that she is healthy and that everything is fine with her because if something happens, we will not even know about it.

All this still, as then, breaks my heart and my family. However, we hope that the day will come when we can return there without fear of being tied up at the border. When we, as before, go to the beach and then return to our cozy apartment on Heroes Desatnikov Street. And how the tower of the military base will be seen outside the windows of our apartment, and the Ukrainian flag will fly over it.