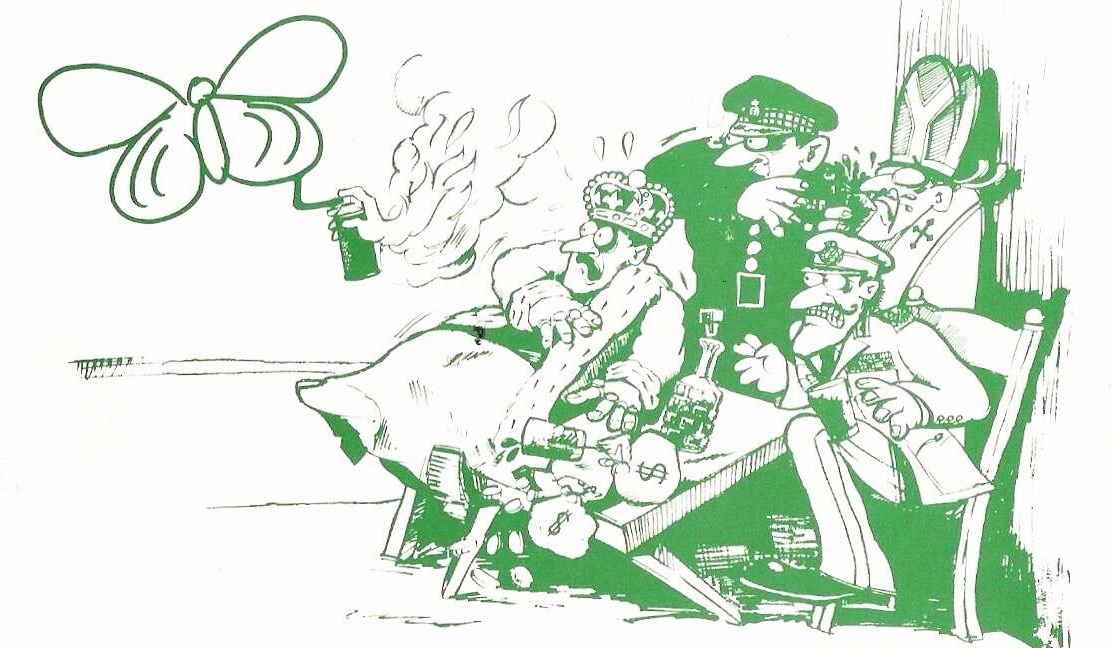 2017 marks 70 years since the founding of the World Federation of Liberal and Radical Youth. As the ideological descendant of that organisation, IFLRY can look back on 70 years of work in fighting for liberal causes. Fighting for peace. Fighting for human rights. Many of the issues that concerned us then continue to plague us today. looking back over our history can be a good way of not making the same mistakes. Those who forget the past are condemned to re-live it after all. So, before this December’s general assembly in Beirut, Lebanon, here’s a look back at our roots.

So said the American president, Woodrow Wilson, in 1912. He should have added the word “long” before the second “history”. There have always been dictators and autocrats, and liberals have always fought to resist them, championing ideals like free speech, personal sovereignty and progress. The philosophy that has been built over millennia has inspired and encouraged countless people, young and old, throughout that time. Slowly, we started to organise ourselves.

It was in the 1920’s and 30’s, when a series of international meetings between different national liberal youth organisations took place, that the notion of an international liberal youth group started to take hold. An article in the November 1930s issue of The Forward View (subtitled The Young Liberals’ paper) described a meeting in Cambridge, where young liberals from western Europe met to discuss issues like the threat of war and the growth of liberalism. The chair of the very first session of this meeting began by saying that “at present time, when liberal movements and freedom in general are threatened on so many sides, it is indeed well that we should gather and take counsel together.” These words ring true now as they did then. And while strife throughout much of Europe in the first half of the 20th century made continuing cooperation between young liberals difficult, in November 1945 young liberals from 9 countries decided at a meeting in London that a truly international young liberals’ organisation be established with all haste. It wasn’t until 1947 however that these young liberals once again joined together in a meeting which ultimately gave birth to the World Federation of Liberal and Radical Youth (WFLRY).

WFLRY was the first international liberal youth platform of its kind. It was headquartered in Geneva, Switzerland, and would send out postal ballots to its members when it wished to make decisions. Every single vote took as long as 2 months to return to the HQ. It was also truly international in its ambitions. The founding documents reference African and Asian delegates, and in 1966 the organisation sent a delegation to make contacts in South America, in a meeting of the progressive liberal youth organisation, called JUDRAL, in Costa Rica. But as the membership and focus of the organisation was mostly made up of European delegations, it was decided in 1969 that a European Federation of Liberal and Radical Youth (EFLRY) should be founded.

Since both WFLRY and EFLRY focused most of their attentions on liberalism in Europe, the closure of WFLRY was agreed in 1978.  But in the very next year, at a meeting in Silkeborg, Denmark, the remaining EFLRY chose to once again take up a global worldview and become the International Federation of Liberal and Radical Youth (IFLRY). This insistence gave new energy to the movement, and the Federation started to once again broaden its perspective. The IFLRY political programme of that year summed it up: ‘The 1979 IFLRY congress does not only mark the entrance into the 1980s. By the transition into an International Federation of Liberal and Radical Youth we are starting a new chapter in the history of liberal and radical youth. This move means an active and conscious move to link up with the efforts of young liberals and radicals outside Europe.’

Since then IFLRY has been leading the cooperation of young liberal organisations at the international level. Even in 1979, the IFLRY political program for the next two years started by saying that “today we see a self-confident and militant conservative offensive” and “the parallel appearance of a New Right”. It called then for a “counter-offensive”, a liberal strategy for solidarity against this movement.

In the 38 years since, IFLRY has worked across the globe to help liberal movements and foster cooperation between youth groups. Congresses and seminars, too many to list here, have been organised every year to discuss issues from human rights to economic policy. Delegations have been sent to every continent but Antarctica to discuss the issues of the time, and to stand in solidarity with those who still have to fight tooth and nail for their freedom. Many of those issues are still with us today, and many people are still fighting that fight. But by hosting guest delegations, organising meetings and getting the word out, IFLRY has grown to proudly consists of over 70 member organisations drawn from all five continents of the world, representing more than three million individuals.

So in this time of political upheaval, when we see growing threats on liberalism and democracy from every side, we can look back to our history and take heart. Ours has been a platform for youth empowerment and mobilization The progress we’ve helped bring about in those 70 years is something to be proud of. We can, and must, tell those who would undo that legacy that we will not give up the progress that our forefathers fought for, and that we will continue resist the encroachments on liberty and human rights of people all over the world. But as we look to the next 70, we know we need to do more than just resist. We need to move the line forward, as our predecessors did, connecting and giving a voice to young liberals who want to change the world. After all, that was the original recipe, and it’s got us to where we are today.