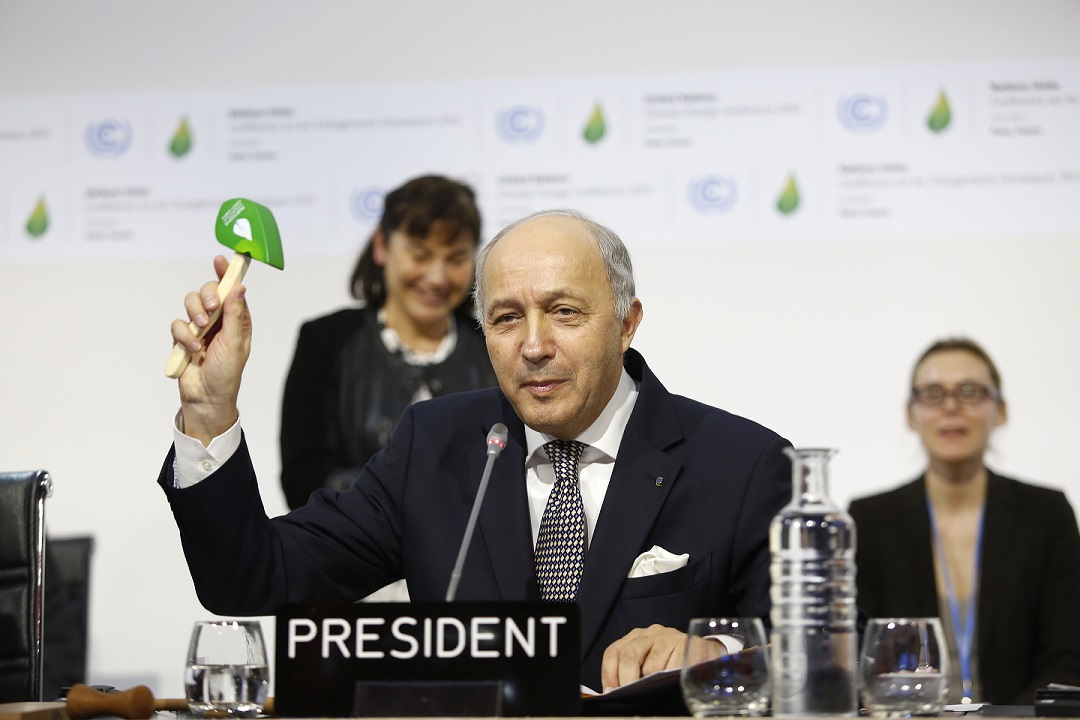 Four years ago in Durban, South Africa, a working group was established to develop a protocol and a legally binding agreement that would be ready no later than 2015, for adoption at COP21 in Paris, France. IFLRY had the opportunity to witness the culmination of four years of tough negotiations by 196 parties, and to observe the disparities and rifts that occurred down to the very last day. Remarkably, we observed the historic moment when all parties adopted the Paris Agreement on December 12, 2015. Here, the COP21 delegation dives into the agreement to answer the questions: What is in the agreement, and what does it mean?

The full agreement can be found here.

What is the Paris Agreement?

The Paris Agreement is a universal, legally binding treaty that will enter into force when at least 55 Parties accounting for at least 55 per cent of total emissions have accepted the agreement. This means that the largest emitters need to ratify the Agreement at home in order for it to be upheld by the international community. The term universal refers to the concept that all parties who ratify the Agreement will have obligations under it. As well, once the agreement is legally binding, it is easier for parties and civil society to hold each party accountable for their actions.

By the time the IFLRY delegation reached the COP21 in Paris, many strides had been made in developing the agreement, and many drafts had already been written. Bringing all 196 parties together in Paris was pivotal in solving three major rift areas that remained from the four years of development.

Early into the conference, COP-president Laurent Fabius identified these three key issues areas as: differentiation, finance and ambition. These were extremely difficult to agree upon, and many feared that it would result in a weak agreement, or worse – no agreement at all. But with high stakes and a respected COP-president, they did, at 7:26 PM, December 12, 2015.

Was the agreement ambitious enough?

Although it is not perfect, and will not solve the climate crisis with the stroke of a pen, the Paris Agreement has some essential elements for success. Most importantly, it ensures that countries’ efforts and emissions reductions will scale up in the future. The so-called Nationally Determined Contributions (NDCs) – every country’s climate plan, and what they have submitted to the UNFCCC – will be updated every five years starting from 2020. The NDCs should always reflect the party’s highest possible ambition, and the successive NDC shall represent a progression beyond the current NDC. This is crucial, and will ensure progression of the climate pledges and the efforts to tackle climate change through mitigation and adaptation.

When considering the parties who adopted this, and who hopefully will ratify it, this might be as ambitious as possible. Both the delegation and many others, especially from the civil society, would want it to be stronger. However, that might mean that several countries would have been unable to accept or ratify it. This agreement, and the pledges the parties have submitted are not enough to stop and reduce the consequences of climate change. Yet, it is a very good start. So no, the agreement is not ambitious enough today, but it might become ambitious enough over time.

Human rights in the agreement

A difficult issue during COP21 was referencing human rights, gender equality and intergenerational equity. Some groups wanted it in the core text to ensure a focus on such principles. Other parties, we have been informed, wanted it in the text because they did not want an agreement at all: By proposing it to the operative text, those parties thought it unlikely to get an agreement, or more difficult at the very least. This shows how tactics can play out during such a conference. In the end we have those references in the preamble, meaning it is part of the agreement, but not of the legally binding part. The preamble is an introductory statement describing the purpose, yet it is not binding as the rest of the agreement. Article 2 also discussed the purpose of the agreement, but this is a part of the binding text. Thus, it has less strength being a part of the preamble and not in article 2. However, as one negotiator told us, it is not too bad to have it in the preamble. Everything that is mentioned in article 2 of the agreement must be taken stock of at the Global Stocktake, to assess the collective progress towards the goals of the agreement, every five years. How do you take stock of human rights? Even though the delegation fought for it to be a part of Article 2, it is good that it still is a part of the agreement through the preamble..

Another important factor of the agreement is the temperature goal. The agreement was striving to include a temperature goal of avoiding an increase of the global mean temperature by more than two degrees above pre-industrial levels by the end of this century. Yet in the months before the conference, the scientific community came out advocating for a global temperature increase of no more than 1.5 degrees Celsius to avoid catastrophic impacts. The two-degree target was not created because it is some kind of magic threshold, a tipping point. For some small island states, 1.5 versus 2 degrees is the difference between keeping or losing their home.

Before coming to Paris, some thought that it would be possible to get 1.5 degrees in the text. However, throughout the conference the civil society representatives stressed the importance of this issue and, to everybody’s surprise, country support for 1.5 grew. In the end, the text refers to both numbers, in a compromise that says we should hold the “increase in the global average temperature to “well below 2 °C above pre-industrial levels and to pursue efforts to limit the temperature increase to 1.5 °C above pre-industrial levels, recognizing that this would significantly reduce the risks and impacts of climate change”. It is not the strongest phrase, but also not the weakest. For some countries, it would have been impossible to only have a reference to either 1.5 or 2 degrees – this was a red line for many.

The part about a long-term goal was a disappointment. In the early days of negotiations, they had clear emission reduction targets as a part of the agreement. In the final text, it is says they aim to peak emissions as soon as possible, something we think is much weaker. What is good about the article on the long term goal, is that it also says that developed countries shall (binding language) continue to take the lead in this, by undertaking economy-wide absolute emission reduction targets.

Another interesting part is in Article 2, covering the purpose of the agreement. In 2.1.c, the agreement states that it aims to strengthen the global response to the threat of climate change, including by “making finance flows consistent with a pathway towards low greenhouse gas emissions and climate-resilient development.” This was a part of the agreement we hear little or no talk about. Still, it is crucial, and a good first step would be to abolish fossil fuel subsidies.

The last key issue we want to highlight is that of finance. While developing countries wanted to be sure they will receive support, developed countries hesitated with referring to numbers and money in the agreement. Already, they have agreed upon reaching USD 100 billion as climate finance annually by 2020. Still, several developed countries did not want this in the agreement, especially not a reference to scaling up finance flows. As a compromise, this reference was put in the COP decisions, which are not legally binding, but give effect to the agreement. What is important about the phrasing is that it says 100 billion is the floor. This ensures that climate finance will remain at a high level, with the hopes of increasing it, should it be necessary.

The road from Paris