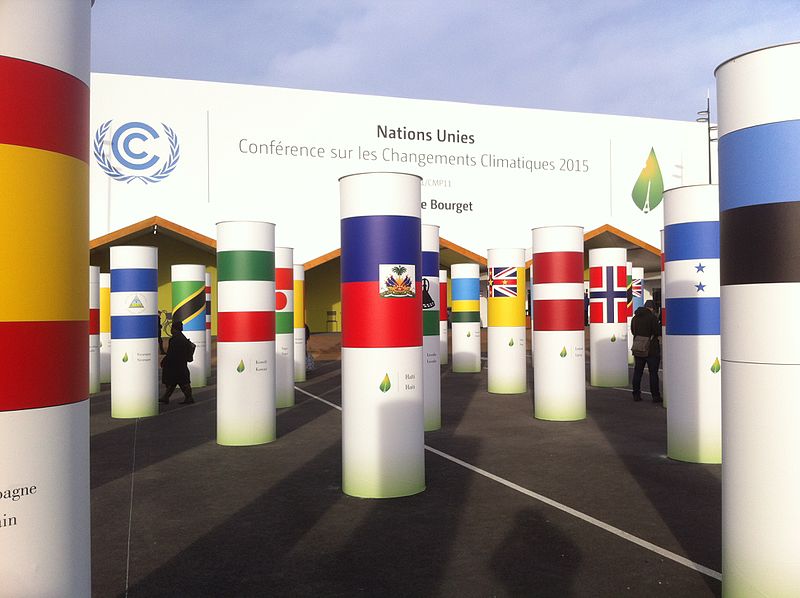 IFLRY (the International Federation of Liberal Youth) represents over two million youth members around the world, and our Climate Change team had the opportunity to bring unique perspectives to COP21. With representatives from Norway, the Philippines, Ukraine, Canada, and the Netherlands, we each had our own national positions and challenges in mind while observing the conference. We were in good company with many other liberals at the COP, such as fellow IFLRY members, and several liberal ministers of the environment from different countries, including the Philippines, Canada and Morocco. Since our delegation is so varied in perspectives, we were able to focus on the realities of negotiations and our countries’ positions at the COP in a unique way.

After ten years where combating climate change was given little to no attention at a national level, Paris was an opportunity for Canada to show its renewed intentions to the international community. With nearly 300 representatives from government, businesses, youth and civil society, Canada was welcomed back and even praised during the first days of negotiations. That did not mean that they were not under intense scrutiny for their alliances and ambitions, however. For instance, Canada was called on many times to state its national goals and actions to limit temperature increase to below 2 degrees, and revise its INDCs.It stated time and time again that it would not be doing so until it had time to meet with the provinces and territories within 90 days of COP21. Canada was a major proponent of the indigenous rights wording being included in Article 2 of the agreement, and even became one of the first countries in the Umbrella Group to support 1.5 degrees. Coming out of a recent election, Canada performed exceptionally well at the conference. Joining the High Ambition Coalition was incredibly smart in the final days of negotiations. Yet they also left much to be desired. The broader community is now focused on what Canada will do between now and March 2016, when they’ve promised to release new national and sub-national targets and action plans.

When it comes to climate change, Norway is a two-faced country: on one hand, it is largely powered by renewable energy, and pushes for more ambitious climate policy internationally. On the other hand, a huge part of Norway’s economy is driven by the oil sector. As the export of fossil fuels is not counted as “Norway’s emissions”, it is easier for them to fight for more ambitious international climate policy. Norway is a country with relatively good ties to other countries, and has tried to act as a bridge builder in the negotiations. Despite being quite successful in that role, during the first week they had some problems with regards to the reference of human rights in the agreement. Norway tried create a compromise with different parties, but it was interpreted as them trying to remove the reference, instead of building bridges. The delegation refused this, but the damage was already done and many viewed Norway as a country blocking human rights. It took them several days to recover and to show that they really wanted a reference to human rights, as well as other important references such as gender equality and intergenerational equity. In the end, Norway is very happy with the agreement, especially the part about the ambitions being increased over time. It remains to be seen if Norway can show the same level of ambition at home as they did in the negotiations.

In the past two weeks of constant pursuit of an agreement, the Philippines played a crucial role as the leader of the Climate Vulnerability Forum, seeking for compromise and settlement. It has been consistent in its fight for a more ambitious and hopeful stance on the negotiations to the point of receiving the Ray of the Day (an award given by organization Climate Action Network, to parties who are being a positive leader in negotiations) thrice in the span of twelve days. The Philippines was awarded this for taking the lead in promoting a meaningful long-term goal to stabilize global temperatures and to decarbonize global economies. However, despite being articulate and precise in its ambitions, it still faced the biggest obstacle it may have in this conference: the exclusion of the provision on liability and compensation for damages due to climate-related catastrophes. The Philippines is set to ratify the Paris Agreement and stands firm on its continued fight for climate justice – a phrase that means so much for a country with negligible carbon emissions yet that suffer the greatest consequences of the changing climate.

In the climate negotiations, Ukraine was representing a very unique position. As a country with a transition economy, Ukraine cannot be clearly defined as developed or developing country, therefore the main focus of the official delegation was on more realistic differentiation of countries. This issue was stressed a lot because every country will get different obligations depending on whether it is defined as developed or developing country. Taking into account current political and economic crises, being a donor (provider of financial support) seems to be absolutely impossible for Ukraine. Moreover, it is clear that Ukraine will be able to implement new energy policies and more sustainable business only with financial and institutional support from the developed countries. In addition, the problems of low awareness about the importance of climate negotiations and low involvement of youth in the discussions of Ukraine’s national strategies were raised during meetings of the Ukrainian delegation representatives and observers. As a result, the official delegation agreed to concentrate more efforts on transparent communication with youth and NGOs regarding the climate negotiations. Overall, the adopted agreement included some improvements towards key issues for Ukraine and got satisfactory support from the delegation and representatives of the civil society.

In terms of renewable energy, the Netherlands is one of the worst countries in the European Union. Even the nationally established percentage goal of having 16 percent renewables in 2020, which is already below the common agreed percentage in the EU of 20 percent, will most likely not been reached. On the other hand local governments and the business community are much more progressive. Also the Netherlands invests a lot of money and knowledge in international development aid aimed at a more autonomous position for less developed countries and low income countries. In short, The Netherlands is, like Norway, a two-faced country.To make matters more complex, the delegation at the COPs is part of the larger EU delegation. Even though negotiating parties are responsible for INDCs on a national level, EU countries have to negotiate as a whole, through the EU delegation. Differences and conflicting interests between member countries – such as The Netherlands position on renewable energy –  can frustrate the negotiations. Even though the Dutch delegation and national government are quite pleased with the Paris Agreement, local governments, opposing political parties, and Dutch NGOs wanted a more ambitious and tangible document. Especially the lack of a clear pathway to decarbonization in the agreement will prove to be a challenge for The Netherlands and its fossil fuel industries.

As a registered observer with the UNFCCC, IFLRY has the opportunity to send a delegates from around the world to each COP. The value this brings is that we truly get to experience the realities of the conference within our own delegation and to ensure that the voices of young liberals from around the world are heard. The number one thing that is learned through the UNFCCC process is that each country has its own national and subnational challenges, opportunities and positions. Bringing these to an international stage will never be easy, and so the conversations we had among our delegation and with youth from around the world was enriching and eye opening to the negotiation process – it’s flaws and its opportunities. It is this perspective that allows us to see what a true success it is that an agreement was reached in Paris.