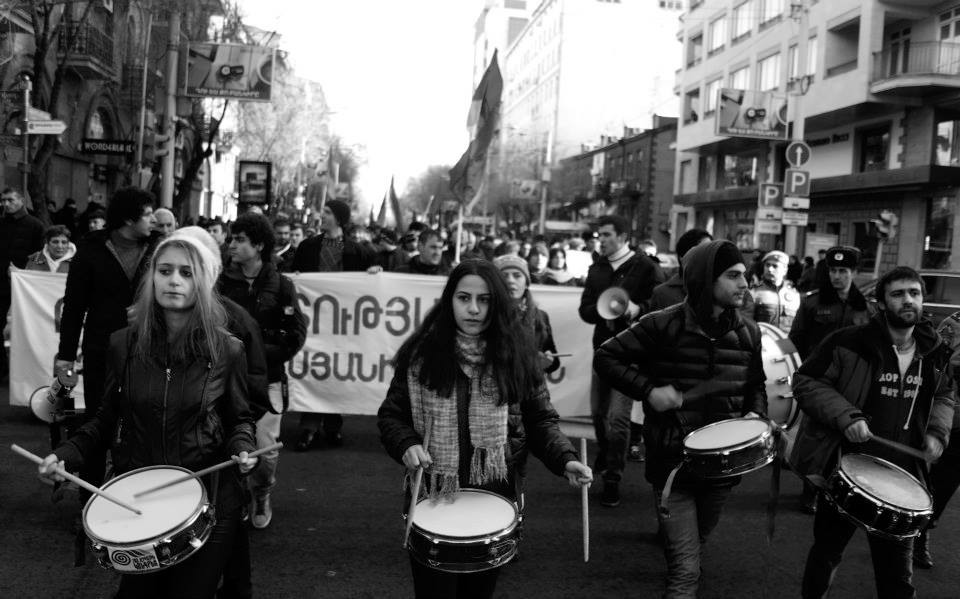 Protest in Yerevan, the capital of Armenia

On December 6th, 2015 a nationwide referendum was held in Armenia. People voted for or against constitutional reforms. “No” got only 32% of the vote and “yes” got 63%. Notably, there were significant differences in outcome within the country, “No” mostly won in major cities and “Yes” in small regions. As a result, the opposition submitted more than hundreds of complaints for the recalculation of results, but the authorities used all their tools to hide the falsified records.

Due to the results of the referendum, the country passed from half-presidential governance system to parliamentary system. The President of Armenia: Serj Sargsyan announced his intention to change the constitution in September 2013, a few months after the presidential elections. He formed a professional commission under his supervision.

On April 10th, 2014 the commission announced the draft version of the new constitution. They proposed to change sections concerning human rights, local governance, juridical authorities etc. Most importantly, according to the new governance system, nationwide elections should be held only for the Parliamentary elections and after, the deputies will elect the president.

The parliamentary opposition (Three political parties: Armenian National Congress, Prosperous Armenia and the Heritage) stood up against the constitutional reforms. They were sure that the main purpose of the reforms was to make it impossible to depose Serj Sargsyan. After a few months a nationwide movement was formed, led by the first president of Armenia, Levon Ter-Petrosyan, businessman Gagik Tsarukyan – leader of Prosperous Armenia – and the main opponent of Serj Sargsyan during the 2013 presidential elections, Raffi Hovhannisyan. This movement was a big threat for Sargsyan’s authority. As a result, the President started political persecution against Gagik Tsarukyan and by using various methods, he forced Tsarukyan to leave politics, which meant that Prosperous Armenia ended its opposition against the reforms.

“Armenian Revolutionary Federation” parliamentary party had its special role during the above-mentioned process. Earlier they cooperated with these three parties by trying to minimize electoral fraud. However, their cooperation did not last for a long time: after a few months they spoke in support of constitutional reforms. Their decision they explain by the fact that they were always against the majoritarian elections system and the new constitution is a good offer, because the Parliamentary elections will pass only by proportional system. However, both systems existed before.

So only two parliamentary parties were left who opposed the constitutional changes: “Armenian National Congress” and “Heritage”. During the referendum, the representatives of these two parties, plus non-governmental organizations and civil movements tried to monitor the elections and prevent fraud. After the referendum, the Armenian National Congress claimed that during these elections, the authorities used every tool at their disposal to commit electoral fraud. They party claimed they bribed citizens, committed violence against the representatives of the opposition and NGOs, and even against the journalists.

During Serj Sargsyan’s presidency, constitutional elections were the first nationwide elections, after which the society did not protest in the streets to demand their rights. The main reason is the fact that the citizens think that the authorities can change only by the presidential elections. That is why the presidential elections are the most active ones in Armenia. However, “Armenian National Congress” and “Heritage” parties held a rally the next day after the referendum in Freedom Square, which was less crowded compared with the other post-electoral rallies.

It is essential to say, that before the elections an oppositional movement called “New Armenia” together with “Heritage” party started all day protest actions in Freedom Square, which last until now.

To add, the referendum results were appealed but it was ineffective. The central electoral commission received hundreds of complaints, some of them even were not discussed. A few days ago Serj Sargsyan gave a speech about the reforms. “The new constitution will improve the political

system of Armenia”- he said. And also, one of the most important facts of post-electoral processes is the upcoming coalition between Armenian revolutionary federation party and Republicans (leaded by Serj Sargsyan).

In conclusion, after the constitutional referendum, both the opposition and the authorities are going to prepare for the 2017’s parliamentary elections, which are held every 5 years and are decisive in political life.

Mariam Muradyan is an active member of the Armenian IFLRY member oganistion: ANC Youth. She studied Markenting and Economics at the French University of Armenia, and is currently a journalist for the online newspaper iLur.am.