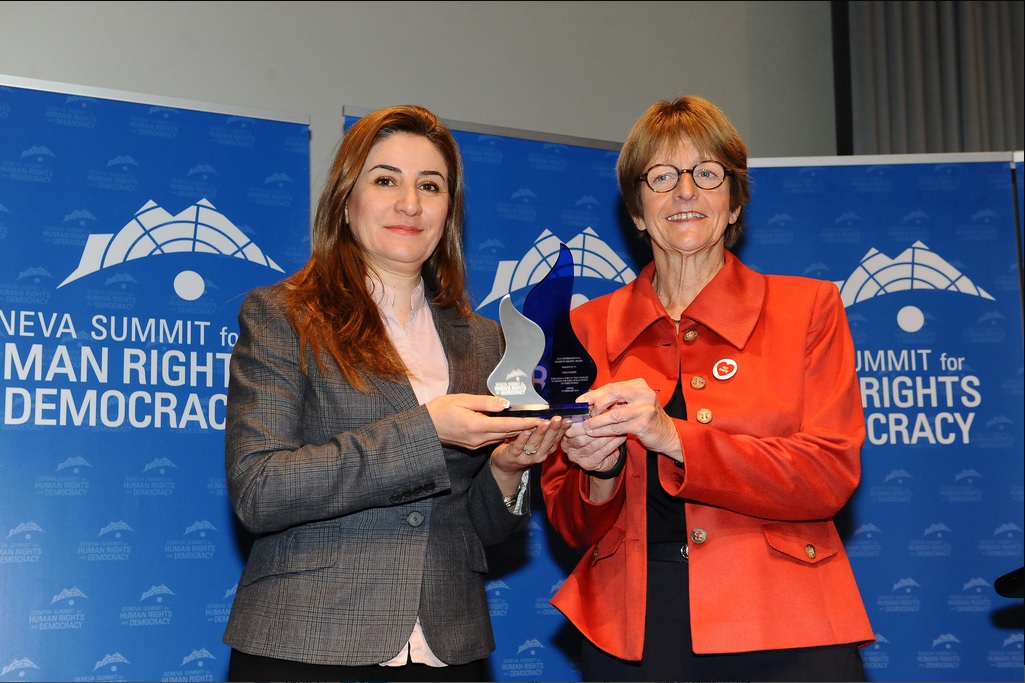 In her introductory speech for the Women’s Rights Award 2016, Anne Brasseur, the president of the Parliamentary Assembly of the Council of Europe, underlined how important fighting for Human Rights is. “Betraying and losing our values is betraying and losing ourselves”, she said during her speech. As Human Rights know no borders and no gender, it is crucial that these rights are protected for everyone, everywhere around the world. As the Ambassador of the “No Hate” campaign of the PACE, her words resonated among many of the NGOs and Human Rights activists present at the Geneva Summit.

The Women’s Rights Award is presented during the Geneva Summit for Human Rights and Democracy every year and the laureates of 2016 have particularly concerned themselves in the safety of Yazidi women. Ms. Vian Dakhil is a Yazidi member of the Iraqi parliament and famously made an emotional speech that stirred President Obama to rescue Yazidis in 2014. Dr. Jan Ilhan Kizilhan is a German psychologist who has treated over 1,100 female Yazidi and other victims of ISIS sexual enslavement. They both received the Women’s Rights Award, and when during the panel after the Award ceremony the video of Ms. Dakhil speech was shown, it became particularly clear how necessary and great their work is. You can watch her emotional and moving speech in the Iraqi Parliament here.

After receiving the Award, Ms. Dakhil gave a speech outlining the overview of all the treaties that have lead up to Human Rights as they stand now. She added however: “Today we must fight against the persecution of women around the world” as despite all of those treaties, the world has not been able to end this for good. “The statistics of violence against women are terrifying” she continues, “as women are raped and held as slaves by ISIS soldiers”, their families murdered before their eyes, and their children taken and kept in camps to train them as the new generation as ISIS soldiers. Her graphic descriptions were underlined by the Dr. Kizilhan, describing his incredible work by stating “The fight for survival of these women is continued in the fight against their horrible memories”. Their work is not done, but great steps have been made.

Looking at the Geneva Summit for Human Rights and Democracy from a gender perspective, the role of women in Human Rights is extensive. As Anne Brasseur emphasized; even though Human Rights have no gender, women around the world seem particularly vulnerable. During the summit, female activists gave hope for the future, as they are strong and are fighting against their inequality. Like Darya Safai, who is fighting for gender equality in Iran, which still has a long way to go: “people sometimes say to me that the position of women has changed for the better over the last years, but that can’t be less true. Other limitations have arisen for the Iranian women.” As she described in a metaphor: “Our wings were clipped as if we could never spread them and fly away.” Other female activists from around the world gave similar insights in the situation in their countries, like Polina Nemirovskaia (Human Rights activist, Russia), Anastasia Lin (Miss World Canada 2015 and Chinese Human Rights activist) and Antonietta Ledezma (daughter of political prisoner and Mayor of Caracas, Antonio Ledezma). These women are at the forefront of an equal world with equal Human Rights.

Human Rights should however not only be equal for men and women, but for any gender identification one might have. Even though it became clear at the Geneva Summit that we still have a long way to go to achieve this, crucial steps are being made everywhere. The stories of the activists mentioned in this article, as well as many other speakers at the Summit inspired many, including me, to work even harder towards this common goal. I believe that our generation might be the one to actually achieve this global change towards tolerating, respecting and protecting everyone. The IFLRY Gender Equality Programme and Human Rights Programme will do their part. What will you do?

Laura Neijenhuis is an active member of the Jonge Democraten in the Netherlands and is the current Programme Manager of the Gender Equality Programme at IFLRY. She has almost graduated her masters in Human Geography and currently works as a Research Assistant at the Institute for Housing and Urban Development Studies in Rotterdam. You can reach her on laura.neijenhuis@iflry.org tweet at her @lauraneijenhuis or find her on Facebook.