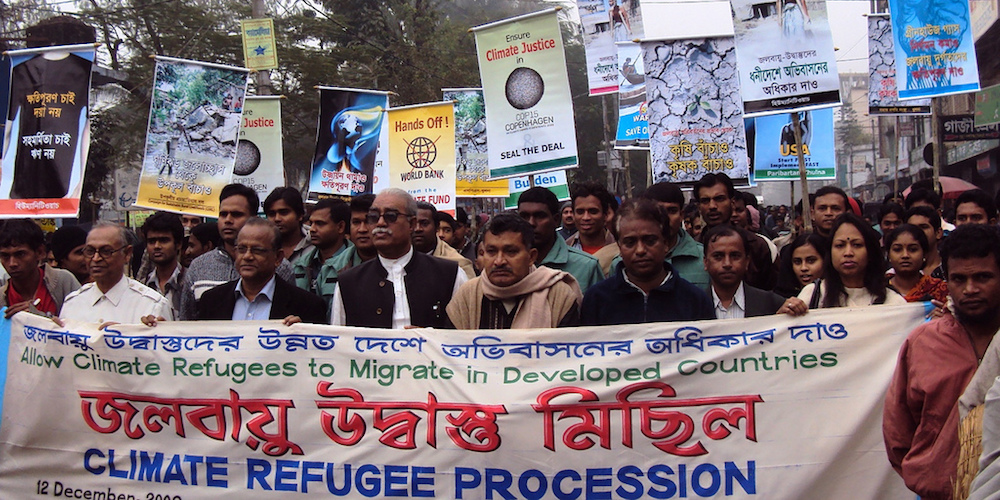 During recent years, Europe has faced a refugee crisis. A great amount of people in regions close to Europe had to flee their home country due to war, violence or persecution. Even though people are displaced every day, Europe wasn’t prepared for the mass of people coming to its territory to seek help. After Europe’s initial shock, it has now somewhat recovered. However, people still have to flee their home country every day. On top of that, another “refugee” crisis could be on its way, and what Europe should have learned from the past years is that it needs to be ready to help those who are in need. What “refugee” crisis could be the next major change? The answer is climate migrants, or “persons displaced in the context of climate change”.

So, what’s the definition of a climate migrant? Climate migrants are people who must flee their homes because of climate change, for example due to higher sea levels and warmer temperatures. They are a sub-group to environmental migrants, which are people who are forced to flee because of natural disasters. Environmental migrants are not internationally recognized as refugees. This means that they face greater political risks than other persons fleeing their home because of war or persecution do. Actually, most countries don’t take climate change, global warming or natural disasters into account when granting asylum. The only exception is Finland and Sweden, where environmental migrants are sometimes included in official policies as “persons otherwise in need of protection”.

We are currently living in a period where the world’s climate is heating up faster than usual. The human population contributes to this process, amongst other things by burning fossil fuels and cutting down forests. These activities release greenhouse gases, which trap heat in the atmosphere. Global warming can change weather patterns, increase droughts and storms, melt glaciers, increase sea levels, and change the behaviour of animals and plants, this is forcing people to flee. It is difficult to estimate how many people will flee because of climate change and global warming. The most widely cited estimate is that by 2050, there will be around 200 million environmental migrants in the world.

There are several areas in the world where it is becoming more and more difficult to live because of climate change. For example, sea level rise makes it difficult for people living in Bangladesh and in Maldives. It is predicted that Bangladesh will lose 17 % of its land by 2050, which could lead to as many as 20 million climate migrants. As for Maldives, tourism support about a quarter of the economy, but sea level rise makes it more and more difficult to support tourists and tourist facilities. Other cities that are vulnerable to sea level rise are Manhattan, New York; London, England; Mumbai, India; and Buenos Aires, Argentina; to name a few.

Another result of climate-change which causes people to flee is drought. For example, the Gobi Desert in China is expanding fast, causing farmers and merchants to migrate to China’s crowded urban areas. Also, rural residents in Somalia, Ethiopia, and Eritrea engage in subsistence agriculture, meaning farmers producing enough crops only for their families and communities. They are threatened by starvation and poverty because of drought, resulting in overcrowded refugee camps in Kenya.

Who might be receiving climate migrants in the future? At the moment, most climate migrants are internal migrants, and most countries facing extreme consequences because of climate change are developing countries. This is problematic, since developing countries are especially vulnerable to climate change and global warming and don’t have the ability to adapt to their new reality. However, one can assume that if we don’t succeed with the Paris Agreement, countries least likely to be affected by climate change will receive a lot of climate migrants. These areas are Europe and North America (keeping in mind that there are state-, regional- and city-specific differences).

This article originally appeared on youth4climateambition.wordpress.com

Laura Fagerlund is currently studying for an MA in Political Science. In 2017 she was an intern at the Nordic Council of Ministers, where she worked on the Nordic Agenda 2030 programme and COP23. Her internship made her even more interested in sustainable development generally and climate change specifically. She is now a co-manager of the Climate Change Programme at IFLRY, and the President of the International Committee at the Swedish Youth of Finland.