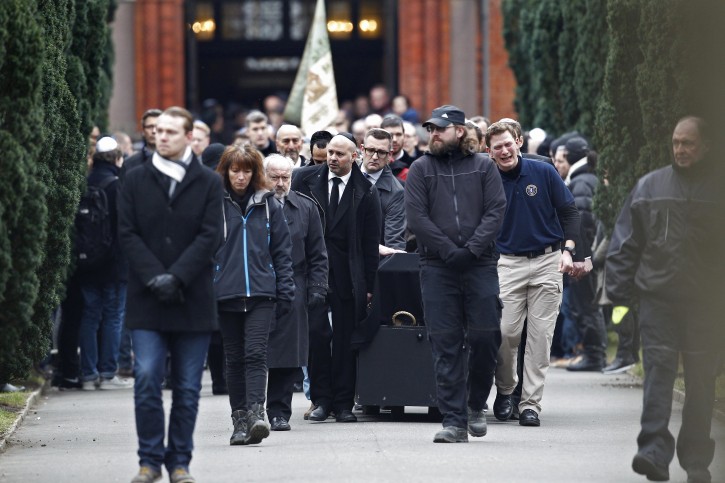 Danish Jewish community members accompany the coffin during a funeral ceremony at a Jewish cemetery in Copenhagen, Denmark, 18 February 2015, where the Jewish man shot dead in Copenhagen

For years the sardonic label I’ve used to describe my traversing of Europe to friends and family has been “Sam’s Misery Tour of Dead Jews.” The carnage is historical of course, but also current.

To name just a few examples:

The specter of armed security at synagogues, already not entirely foreign to the American Jewish community, has been a fact of life in Europe for years in response to a modern upsurge in antisemitic violence. I have visited countless synagogues, Jewish museums, and other Jewish sites across 11 countries in Europe, and almost all of them have some combination of armed guards, airport-style security, or airlock-style double doors (where one set cannot be opened without the other set being closed). In France and Belgium, Jewish sites are guarded by army soldiers with assault rifles. It is a reality I have witnessed myself, and that the majority of Jews elsewhere in the diaspora live day in and day out. This fortification of Jewish schools, synagogues, community centers, and museums, far from being any kind of reassurance, and even farther from being a solution, stands as visual testimony to these societies’ failure to allow a tiny minority to exist in peace, safe from the violence of the oldest form of racism in the modern world.

It is against the backdrop of these conditions that public opinion surveys show that 80% of the third largest Jewish population in the world has seriously considered leaving France, and that migration statistics show 1 in 10 since the year 2000 have already left.

And so after years of news of these attacks elsewhere, the news of 11 Jews murdered in Pittsburgh in the worst antisemitic violence in American history is, I have to say, not surprising–not only because it’s become so common outside of America but also because of a clear upswell of antisemitism in American politics and society, concurrently with but also distinct from an upswell in other forms of open racism, all of which have been tacitly endorsed if not outright encouraged for political purposes by the president. In truth I have suspected for years that the absence of attacks of this type in the United States existed on borrowed time, and that the future living conditions of American Jews might one day resemble those of Europe.

While the particular variant of conspiratorial supremacist violence is different, the the practical result is the same. A contemporary aftershock of the centrifugal force of ethnic-nationalist violence that reorganized the western world into nation-states within the last 150 years, now today outside my childhood synagogue and outside the neighborhood Jewish Community Center where I took Hebrew classes as a teenager, NYPD officers stand in riot gear, armed with military-grade assault rifles, behind anti-vehicle bollards installed to prevent ramming attacks.

Sam Hudis is the Northeast Region Director of the Young Democrats of America, and a geospatial analyst.