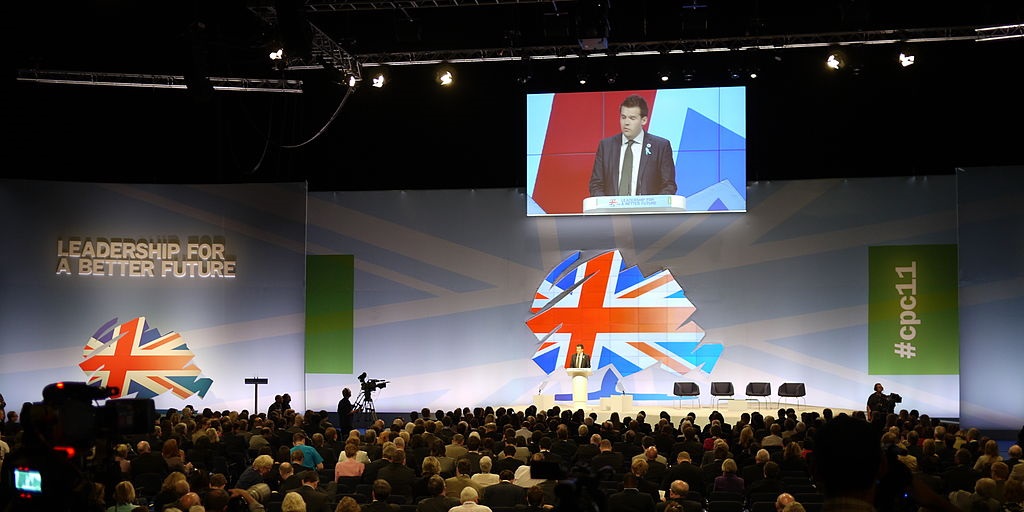 Conference of the UK Conservative Party. The average age of its members is currently said to be 72.

Borrowing from Rogers (2005), in the past, citizens’ commitment to political parties (particularly Europe) could be likened to religious affiliation. Membership of a political party was seen as a way of life. These days however, such political commitment is more likely to be invested in extra-party political organisation and movements like green groups such as, the Danish Organisation for Renewable Energy (OVE) in Denmark, the Green Party in the UK, the anti-globalisation movement, or evangelical, ‘pro-life’ groups. Members of these organisations feel personally connected to the issues they pursue. As a result, the membership of single issue campaigning groups has swelled as membership of political parties has declined. Consequently, the attractiveness of single-issue political action committees will be detrimental to general party recruitment, especially for recruiting young activists, who are more focussed on political action. More so, according to Heidar (2007), “Voters burning for particular issues may well find agitation, demonstrations and single issue organizations more inspiring and worthwhile than the generalist, full package approach of party politics”. Is this an indication that political parties should consider establishing within them single issue groups focussing on issues such as climate change, LGBT rights etc. as an alternative to membership recruitment and a drive to sustain interest?

One may ask, what is it about political parties? Are they pursuing objectives that don’t interest citizens? Generally, have citizens lost confidence and trust in political parties, because they have failed to deliver on their promises to provide the public good? Have they failed in performing the primary functions of the state, that is maintaining law and order as well as protecting lives and property, especially when they are in government? Or do the demands, and pressures of modern life leave people with little or no space to engage in politics?

At the beginning of the twenty-first century, political parties in European democracies clearly lost the capacity to engage citizens in the way they once did. Most importantly, this decline in party membership that started in the last quarter of the previous century is not peculiar to newly established democracies. On factors leading to membership disengagement, Heidar (2007) points out that traditional modes of party membership engagement have given way to new modes of citizen engagement such as “signing petitions and supporting political actions”. According to him, economic, environmental, technological and social change are contributing factors to political party membership decline in Western Europe and he posits that “the media, post-industrialist work habit, new family structures, volatile voters, new issues and EU political system” are key among the factors creating incentives for change in party membership. With these modern mediums of communication greatly reducing and replacing party members’ role as agents of campaigning and mobilisation in their respective constituents, why then should political parties be interested in membership recruitment, especially when members are seen as having a limited role in voter mobilisation and communication? Even though these modern mediums of communication and campaigning are inevitable, with increasing digitalisation and the busy lifestyle of the modern man/woman, political parties should view them as complements to the traditional mediums of campaigning (face-to-face interaction).

Looking at recent developments and the future of political parties, one can safely argue that this decline in party engagement is largely due to the emergence of extra-party mediums of engagement. Advancements in technology have led to the development of mass marketing. This has reduced the reliance on political party members for funding and voter mobilisation. And so, a major impetus for membership recruitment has now largely disappeared. Even though this has diminished political parties as a platform for democratic engagement, this does not mean that they lost their relevance in modern democratic systems.

Statistically, it is worth noting that, in the United Kingdom, France and Italy, parties have lost 1 to 1.5 million members in the last three decades, which corresponds to a total loss of about one to two-thirds of their original supporters. Similarly, the Nordic countries have also suffered heavy losses, seeing a reduction in membership of about 50 to 60 percent (Biezen, Mair & Poguntke, 2012). Studying political party membership mobilisation and empowerment in Germany, Mielke (2011) also argues that, the Social Democratic Party has experienced a steady decline in party membership from over one million members to 500,000 members between now and the 1970s.

Like its European counterparts, Kenig, Philippov, & Rahat (2013) also indicate that political party membership in Israel (Kadima, Likud and Labour Parties) have been on the decline for the past three decades, with membership numbers fallen from 423, 495 to 251,942 between the years of the 1970s and 2000 respectively. More so, this decline in political party membership is not peculiar to European democracies, but can also be seen in Australia. The membership of the Australian Liberal Party fell from 156,000 to 78,000 from the 1940’s to date. The Australian Labor Party suffered the greatest membership decline, with membership numbers down from approximately 370,000 to 44,000 between the 1940’s and 2014.

To overcome the challenge of declining membership, as well as retaining and expanding membership, political parties should invest in building a proper, reliable and workable membership database. This membership database should be comprised of the name, contact, date of birth, residential address, occupation, marital status, gender and as well as the religious affiliation of members. By so doing, political parties will be able to establish a long-term personal relationship (other than transactional relationship) with their party members by sending them birthday messages on their birthday as Banks, Telco’s and other organisations have recently been engaging in (a phenomenon not known to them decades ago), knowing the type of messages to send taking into consideration their religious affiliation and other related factors. Transactional relationships tend to be more costly as parties’ will have to expend more resources in contacting and building relationship with party members a short while to elections. This relationship is often not trusting and does not breed membership loyalty to a party.