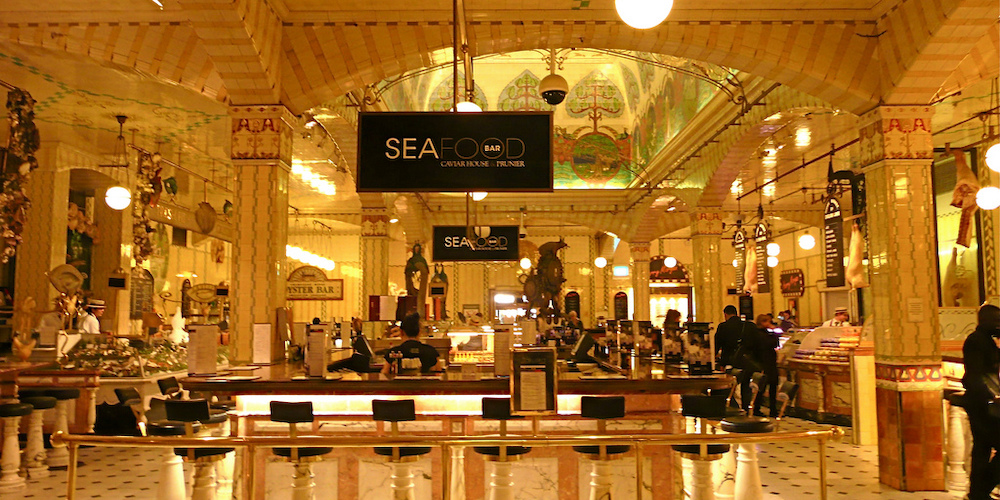 Interior of the Harrods department store in London.

Here in Britain, we have a saying: ‘don’t look a gift horse in the mouth’. In effect, don’t ask how something good came to be, just accept that it now is. Unfortunately, this way of thinking seems to be at the heart of British government policy. Big business as well as foreign and individual investment has transformed the British economy since the completion of the European Single Market in 1993. Unfortunately, this transformation has mostly come about through Britain dancing on the edges of what is acceptable under European – and international – finance laws. (PPI, anyone?) Now, as Britain leaves the EU (conveniently timed with an EU-wide crackdown on rogue financial practises and poor taxation), there is, quite simply, no legal mechanism to hold us back from the misery of a fully-realised, neo-liberal, “greed is good” economy. Such a move would only serve to embolden the architects of Brexit and exacerbate the social issues which led to 17.6 million of my fellow citizens to vote for our departure.

It is here, before we enter into the grit of this article, where I shall explain just what an Unexplained Wealth Order is. A UWO, quite simply, is a summons issued by the High Court to an individual or organisation, following a request made by one of five government agencies (the National Crime Agency, Her Majesty’s Revenue and Customs, the Financial Conduct Authority, the Serious Fraud Office, or the Crown Prosecution Service), asking them to explain how they came to accrue an inexplicably large amount of money. There is no presumption of guilt, merely a desire to ensure that financial laws are being followed. Should an individual or company fail to respond to a UWO, then the government has the right to seize assets or property equal to the amount of money that has been called into question. In principle, this seems to only be a fair, equalising aspect of British financial regulation. However, whilst none of these five agencies fall under direct ministerial control, meaning that they are autonomous of elected governments, they are still an agency within Her Majesty’s Government. One in particular, the Crown Prosecution Service (CPS), is strongly influenced by politics. They have unofficial prosecution targets in terms of the percentage of cases put before them that must be pursued, in particular with cases of sexual violence, and political pressure surrounding certain cases. Therefore, I see its usage as a smokescreen.

A prime example of this came in the wake of the acquittal of actor Bill Roache in a high-profile historic sexual assault case. In 2014, Roache was found not guilty of all charges, with one of his accusers implying that she had falsified some parts of her story. The media furore surrounding his prosecution on relatively flimsy grounds led to political fallout; the CPS was highly criticised for pursuing a conviction. It resulted in political pressure on the CPS to deliver more convictions for sexual assault cases, despite its status as an autonomous body.

If the government applied pressure to the CPS here, then it is not unreasonable to assume that it would be inclined to do so again with regards to UWOs. If there were to be political or media pressure on the government to act on a financial issue, then the twisting of the CPS’s proverbial arm may be all too tempting. But, this said, it is also vital to understand the background and climate out of which UWOs were born in order to grasp their full gravitas.

This is how UWOs could be used as a smokescreen. UWOs were only finally, and with significance cross-party support, created by the Conservative-DUP government last year. Their function? To assuage moderate parliamentarians’ fears that Theresa May’s promise of a “small-state, global post-Brexit Britain” was simply Maybot code for “tax haven with reduced human rights”. With the mechanisms and formalities recently finalised, the first UWO has now been issued. Zamira Hajiyeva, the wife of an Azeri petrol tycoon, has been asked to explain how she – in essence – emptied Harrods on multiple occasions and how the money required for this was legally moved from Azerbaijan to the UK.

This is how we are to see the UWO as working. It is the British “fight back” against unethical business practises. We are told that it will expunge the UK of embezzled foreign money. No longer can money be funnelled into Europe through London. No longer will the British people be subjected to the effects of the laughable taxation on big business and the wealthy. UWOs will narrow income disparity. I beg to differ.

For many years, we Britons have heard how wealthy Arabs, untrustworthy Russians and sneaky African despots have funnelled money through Britain at the detriment of, not only their own nations, but of Britain’s reputation on the world stage. Whilst this does happen, I believe that the real nature of UWOs is to further the attack on immigrants.

Let me cast your mind back to the EU Referendum. The DUP (May’s junior coalition partners) backed a Leave vote and were ardent in their campaigning. As the dust settled after the vote, an anomaly was found by journalist Oliver Wright from The Times: the DUP had received more than £400,000 from the pro-Brexit think tank the Constitutional Research Council. It had not been declared nor has any trace of that money ever been found. This has to be the epitome of possible corruption; a party in government causing more than £400,000 to simply disappear.

On paper, the DUP and their leader, Arlene Foster, should have been amongst the first recipients of these new UWOs, yet they have not been. Nor has Brexiter-in-Earnest Jacob Rees-Mogg, who recently relocated his investment business to Ireland ahead of Brexit. Nor have the more than twelve Conservative MPs who are known to have broken the government’s own election campaign spending limits in both the 2015 and 2017 general elections. This is not to say that any of these people are guilty of any crime whatsoever, merely that an explanation should be required, in much the same manner that Zamira Hajiyeva has been compelled to issue one.

Hajiyeva’s case appears to not be entering the mainstream media discourse in the UK. That is currently almost entirely dominated by Brexit and the ever-imminent collapse of May’s fragile government. This has led to UWOs being largely side lined – for now. But this cannot last indefinitely. As Brexit has stoked racial tensions, UWOs could well only throw more fuel on the fire if they are used to selectively chase and prosecute ill-gotten gains. UWOs are in their infancy. However, the powers that be appear to be ready and all-too willing to use them for the purpose of deflection in the name of protection.

With an increasingly vitriolic press, a senior governing coalition partner that is capable of almost anything to stay in power and, soon, no influential supranational forces opposing them (or, indeed, any strong domestic opposition), I cannot help but wonder if UWOs are simply the beginning of a slide towards a new, more overt kind of demonisation of foreigners. One that, perhaps, can only truly be unleashed after Britain has severed all meaningful ties with Europe. I hope to be proven wrong.

Luke Sandford is a staunch Remainer and, thanks to his EU passport, a citizen of a continent. He travels whenever and wherever he can and plans to emigrate to Sweden. He is a member of the Liberal Democrats because they are the only UK-wide party who are committed to this big, strange beast called the EU and are trying to take the UK in a global, internationalist direction.