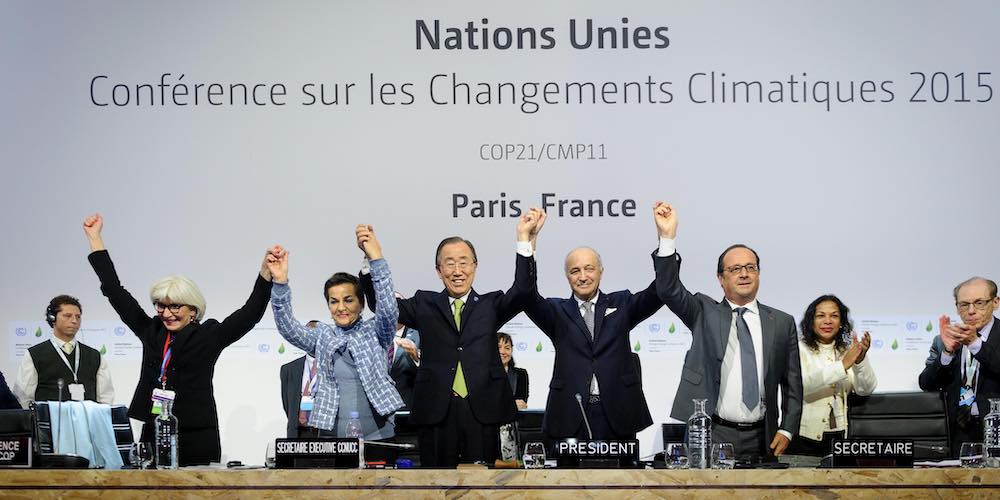 The moment the Paris Agreement was signed at COP21 in Paris.

This article is the introduction to a series by the IFLRY Climate Change Programme, looking at how different countries are implementing the Paris Agreement.

2018 is an important year for climate action and for IFLRY’s Climate Change Programme. This month, the Intergovernmental Panel on Climate Change (IPCC) released its Special Report predicting the consequences of Global Warming by 1.5C degrees. The report confirms that anthropogenic climate change is worsening and countries are drastically off track to advert climate impacts on ecosystems, human health, livelihoods, food security, water supply, human security and economic growth.

The timing for the IPCC couldn’t come at a more pressing time as countries convene this December to adopt the Paris Agreement Work Programme (PAWP) during the UN Climate Negotiations (COP24). The PAWP is the set of governing rules that will operationalize and bring to life the Paris Agreement. Getting these rules right is an imperative, considering that the world has less than 12 years to prevent dangerous destabilization of Earth’s climate, as outlined by the IPCC report. Countries are working overtime on crafting a final negotiating draft of the PAWP in time for COP24.

With all these important developments taking place, IFLRY’s Climate Change Programme is pleased to introduce the Climate Change Article Series in partnership with Libel.

Before looking at climate strategies it is important to look at what Nationally Determined Contributions are, how they differ between countries, and why they are the heart of the Paris Agreement.

What are Nationally Determined Contributions?

Nationally Determined Contributions (NDCs) are the engine of the Paris Agreement, as they represent each country’s efforts to reduce national emissions and to adapt to climate change taking into account domestic circumstances and capabilities. Under the Paris Agreement, countries must communicate, maintain and implement domestic policy measures to achieve their NDCs.

The aggregate of individual countries NDCs will determine whether the world will achieve the Pars Agreement’s long-term goal of limiting global warming to 2 degrees with the aspirational goal of 1.5 degrees. Every five years there will be a global stock-take to assess the collective progress towards achieving the purpose of the agreement and to take more ambitious targets as required by science.

What type of NDCs are there?

Countries must account their GHG emissions to track individual progress towards their mitigation NDC targets, track progress, and compare with other countries NDCs in order to assess collective progress towards the long-term mitigation goal of the Paris Agreement. Not every country measures the reduction of GHG emissions in the same way, what follows is an overview of the different kinds of targets different countries have set in their NDCs.

These are the type of NDCs used by countries: 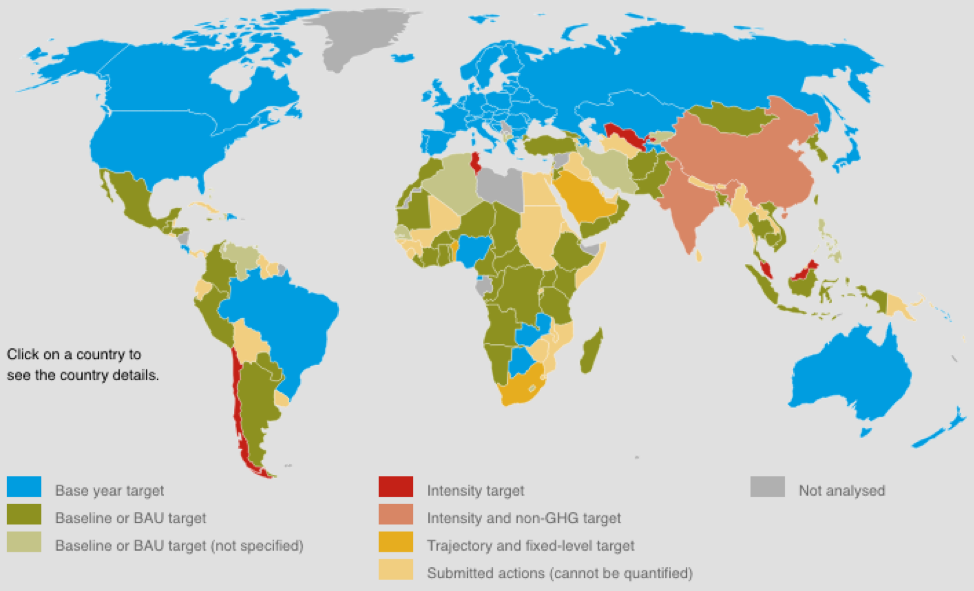 While the diversity in approaches allows for flexibility and consideration of countries’ national capabilities and contexts, a recent OECD report found that the diverse spectrum of NDCs and the wide range of developed and developing country capacities to implement accounting raise challenges for comparing and aggregating emissions. At the same time, having a more rigid and universal approach to NDC accounting raises challenges with regards to participation and inclusion of countries.

Why are NDCs so important?

While this approach provides flexibility and adaptability to fit each country’s context, one of the challenges under this approach is with regards to the emissions gap. This means that pledges under the Nationally Determined Contributions so far only cover one third of the emissions needed, creating a “dangerous gap” as outlined in latest UNEP Emissions Gap Report and also noted in this UNFCCC communiqué ,and widely outlined in the latest IPCC report.

As stressed out by the IPCC report countries must take rapid and unprecedented collaborative and coordinated action if we are going to achieve a goal of 1.5 degrees warming. Addressing a complex challenge like climate change is not an easy task. Although the Paris Agreement has set a unified vision and framework for addressing climate change and a transition to a more efficient, low-carbon and climate resilient society, that vision won’t be achieved unless countries work together to meet their NDCs and increase ambition towards shifting to low carbon energy in a way that is just and fair for workers, communities, indigenous peoples, businesses and civil society.

It is our hope that the Climate Change Article Series will shed some light as to challenges and potential areas of opportunity to reduce countries’ emissions and achieve the collective goal of meeting global warming to 1.5°C degrees. By looking at countries’ commitments to reduce emissions, the CCP team will also acquire insights for IFLRY’s delegation to COP24 this December.