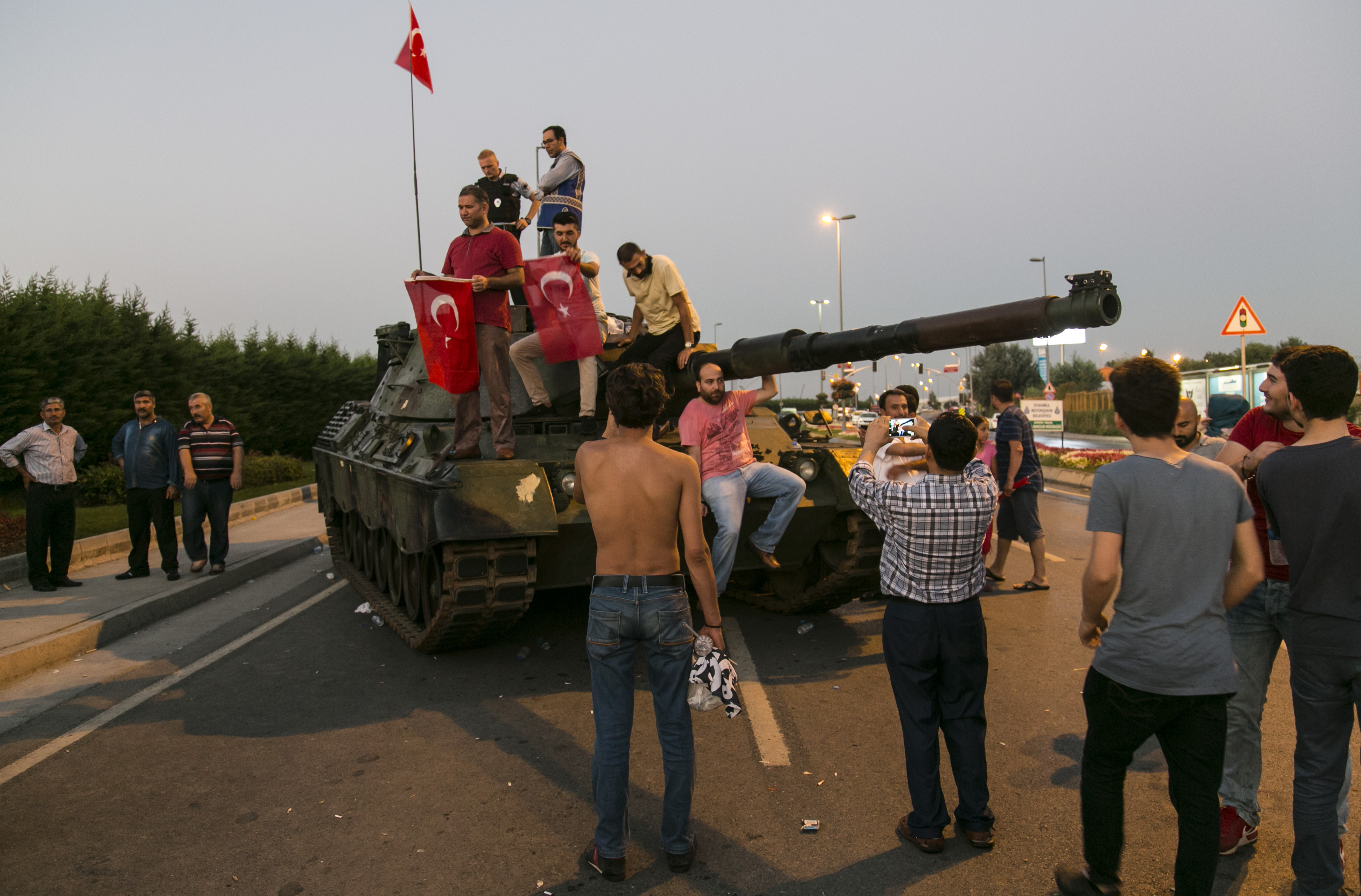 On the 15th of July, something that few could have predicted happened: late on Friday evening, a faction within the Turkish military attempted to seize power in Turkey.

The situation in Turkey was chaotic; soldiers closed off the Bosporus Bridge between Europe and Asia; shootings and bombings lasted all night and tanks rolled in on the Atatürk Airport in Istanbul.

Turkish President Recep Tayyip Erdoğan and his supporters stopped the coup attempt quickly. In a television broadcast made via the mobile application Face Time Erdoğan ordered the Turkish people to go out on the streets and fight those who had turned against the government.

Nazlican Kanmaz, international officer of the liberal Turkish youth organization 3H Movement, was at her friend’s wedding when the coup began. She explains over the phone what the situation was like from North Carolina, USA, where she studies philosophy.

About all Turkish liberals were in the same place, and we were in a way trapped there.

Media reported that many Turks went out on the streets to stop the coup attempt. According to Kanmaz, it was primarily Erdoğan’s people, supporters of the conservative governing party AKP.

The others, like me, were locked down and did not go out. It was not like the protests in Gezi Park, where we fought for our individual rights, more like the individual against the state.

I was horrified by what happened. Soldiers who just followed orders, and also other people were killed. It was so unnecessary. Most of those who were on the streets, on both sides, were innocent.

During the chaotic night, about 300 people died and over 2,000 were injured. Kanmaz says that the coup attempt was very unexpected, almost unthinkable, because Turkey, despite its problems, still is a democracy.

Even if Turkey is not a Western democracy, it is still a democracy. Having a military coup attempt was strange, no one had expected it. There were no signs that it would happen.

Turkey has a long history of coups and many still have unhealed scars after them.  The underlying cause to the coups has often been a generally unstable society or a concern about the country drifting away from the secular values. Turkey is secular according to the constitution, but there has been tension between the religious and non-religious population for a long time. The majority of the Turkish population is Muslim, but there are many who do not practice their faith.

Kanmaz says that the military had a lot of power, especially in the coup that took place in 1980, when the Turkish military lead by Kenan Evren took power. His constitution is still Turkeys’ fundamental law even though it has been changed and modified many times. The latest coup has awoken discussions about a constitutional reform. It is feared, however, that it may be a way for Erdoğan to further strengthen his power. Erdoğan was elected president in 2014, but before that he had served as prime minister for over ten years.

Especially Erdoğan seemed somehow powerless after the coup attempt – and he is the most powerful man in Turkey. But he found a way to turn the situation around through the purge.

After the failed coup a state of emergency was declared. It gave Erdoğan power to govern without the support of Parliament for three months. Since mid-July, around 60,000 people have been dismissed, suspended from their jobs or arrested. There are many people from the military or the police, professors, officials and journalists, but also for example football referees. The manoeuvre has been seen as Erdoğan’s way to ensure his position. Kamaz explains:

Many people were killed or disappeared after the coup in 1980. Most people prefer that people are arrested instead of people being tortured or disappearing. People on the street are okay as long as their friends and family are safe. But of course many, especially those with higher education, are unhappy.

We at 3H are for example trying to work for plurality and diversity, no matter how it looks. But if one gets punished for it, we can’t create a democratic base for minorities, young people, women and other political views. At the moment it is dangerous to try to raise awareness, they can arrest you at any time if you are different.

After the coup attempt the preacher Fethullah Gülen and his followers were accused of being the coup plotters. Gülen has lived in exile in the US since the late 1990s, and Erdoğan has demanded that he is handed over to Turkey. However, according to the US State Department, the inquiry was not connected to the coup attempt.

Gülen’s supporters have networks all over the world and spread their Islamic faith through missionary work. Kanmaz explains that Gülen and Erdoğan were close friends and allies until a corruption case in 2013, where prosecutors that were linked to Gülen accused ministers of the AKP and Erdoğan’s son for corruption.

About three years ago, Erdoğan started to accuse Gülen for trying to establish a parallel state and take power.

According to Kanmaz, Erdoğan is always trying to position himself in opposition to something in his politics, such as the Gülen movement or the Kurds, despite the fact that there is no real opposition any more.

There aren’t as many voices in the political sphere any more, because of Erdoğan claims that we must be one nation in order to be able to defend ourselves against the parallel state.

The nationalist spirit has increased lately, and many Turks are very proud of the Turkish values. Kanmaz says that there is a risk that groups, which are in the margin for Erdoğan, are falling outside his nation building project. Earlier the situation looked more hopeful when for example representatives from the pro-Kurdish party were elected to the parliament in 2015.

Currently Erdoğan is very popular in Turkey. In June 2015 his party AKP experienced a drop in voter support and failed to get a majority in parliament. In a new election in November the same year the party was able to take about 60 percent of the seats. The opposition is formed by the social democratic party CHP, the left-wing pro-Kurdish party HDP, and the far-right party MHP.

Erdoğan gets his power through his voters and he refers to the will of the people. He says that his people are with him – if they weren’t they would not vote for him.

At the start of Erdoğan’s term as Prime Minister the situation was better, the economy turned around because of the liberal fiscal policy. But after the protests in Gezi Park things began to change, it became clear what kind of state Erdoğan tries to create, a more Islamised country.

After the purge there were speculations about Erdoğan’s part in the coup attempt. Some people suspected that Erdoğan himself orchestrated the coup attempt to close out dissidents. Kanmaz doesn’t take a stand for any of the various theories, and says she doesn’t know what to believe. The problematic thing is that the government now uses the failed coup as a way to get as much power as possible. Kanmaz fears that Turkey’s democratic values will suffer.

Even Erdoğan’s crazy actions have been legitimized by the coup attempt.

She believes that some AKP supporters will eventually begin to realize what is happening in Turkey, and that the country after that will not have a conservative government in a long time.

Until then, the next ten or twenty years, we must mobilize.

Another thing that worries Kanmaz is the xenophobic trend that has grown stronger in the EU recently. Turkey’s possible membership in the EU has created debate and also appeared in the campaigns for Brexit.

It is difficult to see what is going on in Turkey from the outside. If I were to stay in Europe, I would certainly also be skeptical about Turkey.

My biggest problem with the news I have seen in Europe is that nobody knows anything about Turkey. They only see Anatolia (The Asian part of Turkey). It is clear that we should also accept that part and that they vote for Erdoğan. But at its heart, Turkey is much more of a cosmopolitan country. What you see in the news are generalizations and simplifications, it does not make the situation better at all.

This article was originally written in Swedish for Liber, the members magazine of  Svensk Ungdom, an IFLRY member organisations from Finland. The author of the article, Susanna Rapp, is the magazine’s editor.