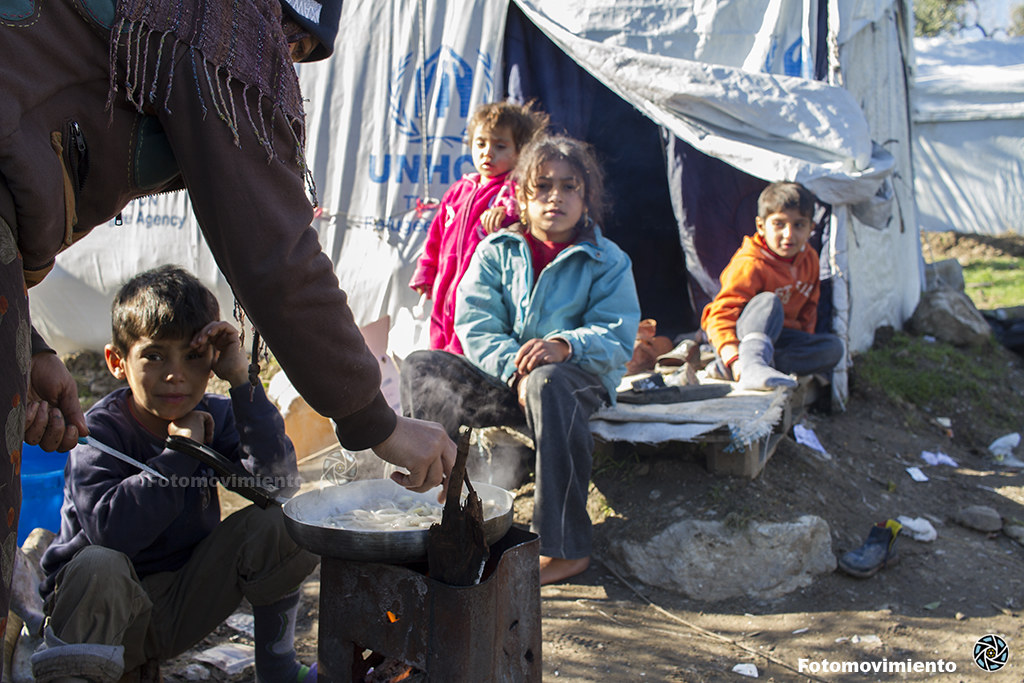 Moria – a small city on the Greek island Lesbos, a Hellenic idylle — is hosting the biggest refugee camp in Europe. Consisting of approximately 20,000 refugees, the camp at the border of Greece and Turkey has become both the gate to Europe and a nightmare for migrants.

Moria is the dark spot of the European Union, a place many of us would like — and some politicians choose to forget. Moria is the place where European ideals of solidarity, unity and equality have been forgotten because of bureaucracy and political indifferences. It is the place where the individual stories of thousands have turned into numbers and headlines, with people everybody speaks about but nobody speaks with.

The situation in camps at the Greek border is generally miserable, as Greek migration policy lacks strategy and clarity. Yet this very specific camp is the peak of the failure of migration policy on a European level. The situation on Lesbos is disastrous and a direct consequence of war in modern history.

People from Syria, Congo, Afghanistan and other precarious states in the Middle East and Northern Africa crossed the Mediterranean — the world`s most dangerous border — to find peace in Europe. What they found was different. Rather than with open arms, they were welcomed with closed borders.

The camp has been constructed for around 3,000 refugees but is now filled with more than 20,000. 200 refugees share one toilet and warm water is only available for certain hours each day. Medical equipment is rare and doctors as well as volunteers are scarce. The capacities of the camp in Moria had already been exceeded before recent political developments created an even greater challenge.

At the end of February, Turkey opened its borders with Greece and thereby declared the migration deal with EU to be invalid. Before, the border between Greece and Turkey had been closed to control migration movements to the Greek islands. By February, 20,000 people were transported to the Greek and Turkish border as a symbol of protest by the Turkish government. The decision of the Turkish leader Erdogan to open the border with Europe made refugees his political instrument. They became part of a political arena, though only as pawns and not as players.

Currently, Europe is holding its breath because of the Covid-19 pandemic. In some European countries, the access to toilet paper and pasta became a fundamental threat, some others experienced real fundamental struggle for the first time in decades. People now tend to panic about the future of their beloved football club and the question in which country their summer holiday will be possible — while the virus is starting to spread in a place where not even hunger can be satisfied.

Covid-19 has been a threat for many regions in Europe, but none of the current consequences will be comparable to the intensity with which the virus will hit refugee camps. The circumstances in the camp have been miserable for too long, but Covid-19 brings the emergency to another level. In a place overloaded with more than 17.000 people, social distancing is a less than realistic. When 200 people are forced to share a single toilet, we do not only speak of a lack of hygienic but humanitarian standards. Medical equipment and professionals are so rare and overwhelmed that not even the necessity of medical service can be provided.

“Generally, at Moria, medical equipment is totally insufficient” is the assessment of the aid agency Doctors without Borders. Over a third of the refugees living in the camp are children, many of them are unaccompanied minors. They are the ones most at risk to not only suffer from the physical dangers, but also from violation, abuse and malnutrition. The Greek governments is overwhelmed by the number of migrants and moreover not stable enough to support such an amount of people in need. As a sign of solidarity and as a response to a variety of accusations by humanitarian organisations, 10 European countries agreed on transferring 1600 unaccompanied minors from Moria to Europe.

As a third of the 20,000 refugees are minors, the majority of them is unaccompanied, 1600 seems like a very arbitrary number. The criteria for the decision of which children to take and which to leave behind are unclear. The acceptance of minors by these European states is therefore nothing more than a symbolic act and does not improve the circumstances in the camp in any way.

“The European Union must do everything to evacuate these people as quickly as possible” — meaning every refugee regardless of age — states Florian Westphal, the German chairman of Doctors without Borders. Now is not the time for symbolic acts to polish up one’s image. A new deal on migration policy with Turkey is needed to prevent the political instrumentalisation of refugees. At least temporarily, the Greek refugees must be given access to the mainland and to a fair process for their asylum quests.

The pictures of Moria fill me with shame and disgrace. Moria is the major blot of Europe and the European Union — the heart of democracy. But what kind of democracy and solidarity is it when only the ones at the right side of the border profit from it? Shortly after the opening of the border, right-wing extremist groups began blocking the gates of the camp to stop refugees from entering: an act of hate, ignorance and violence against men, women and children solely seeking a safe shelter after experiencing the trauma of war.

No, Covid-19 is not the only humanitarian crisis taking place in Europe lately. But it is, in fact, the only threat that seems to concern people. To complain about restrictions and measures saving our life is hypocritical. The migrants in Moria do not have the option to follow life saving measures. They are at the mercy of the virus and the deadly infections it might cause. It is often said that we can only overcome this crisis in unity and solidarity. Moria is a direct example of the limits the so-called European solidarity has.