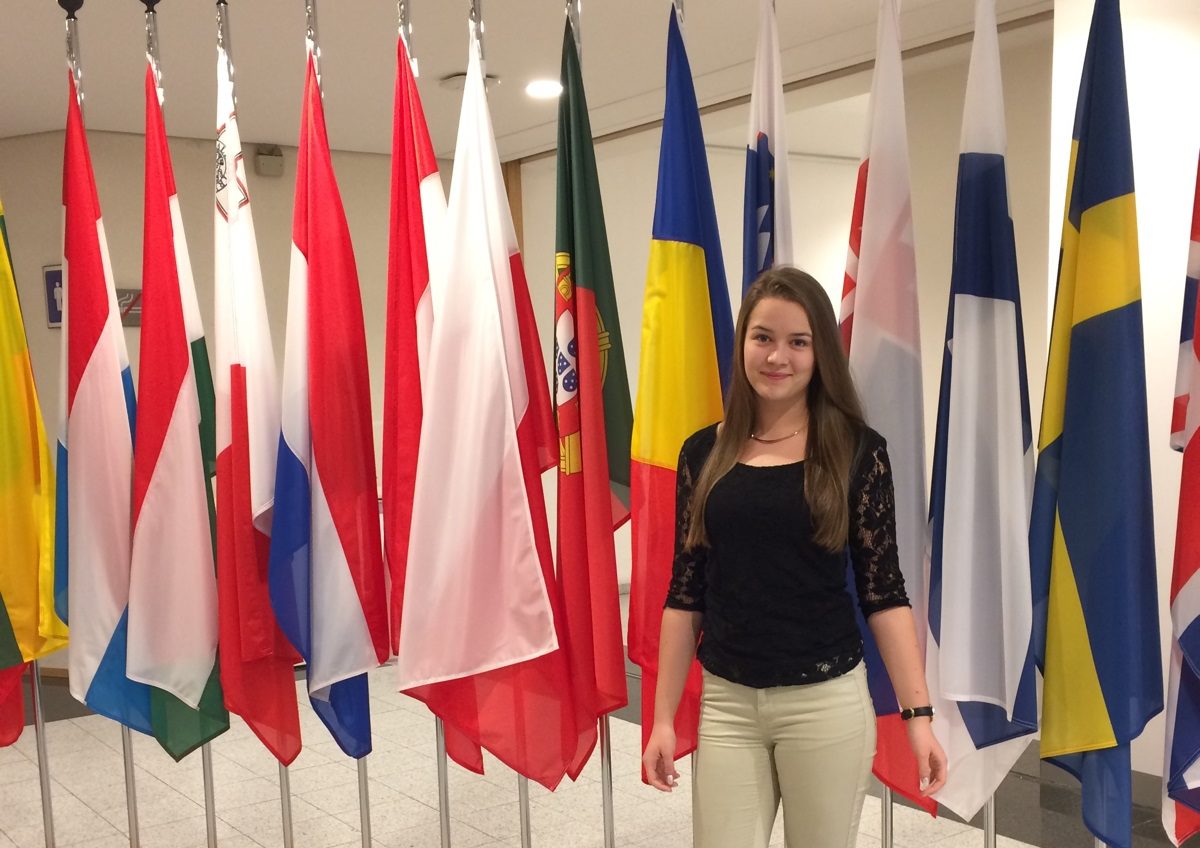 Frida Sigfrids in the entrance hall of the Council of Europe.

Besides the European Union, there is another European organization with a very similar name: the Council of Europe. This organization has more members than the EU – including for example Russia and Turkey, but its purpose is more narrowly defined. It concerns itself mainly with promoting human rights, democracy, and the rule of law.  Four times a year, the Parliamentary Assembly of the Council of Europe (PACE) meets in Strasbourg, France. At every assembly, an IFLRY member attends, to provide administrative support to the liberal ALDE-PACE parliamentary group. This time, it was my turn.

On Sunday the 22nd of January, I traveled from my home in Finland to Strasbourg. I landed at Frankfurt Airport in the evening, and caught a bus that would take me to France and Strasbourg. At midnight, I arrived in and found my hotel. I went straight to bed, so I would have some time to sleep before I had to be at the Council of Europe early the next morning. When I woke up I felt a little nervous, because I did not really know what to expect. I took a walk to the Council of Europe which was easy to find, because there was an enormous sign with the council and all the flags of European countries in front of it.

There I realized that my nervousness in the morning had been totally needless, when I met the husband of the secretary general of the council that I would be working for this week. I got my first task immediately, which was to prepare the ALDE´s group meeting. My role was to set out all the material and then hand out the name tags for all the participants when they arrived. During the meeting, I listened to very interesting debates such as the current affairs debate on the situation in Syria and its effects upon surrounding countries, which was requested as an urgent debate to the session. Another request for an urgent debate was the functioning democratic situation in Turkey.

The real Parliamentary Assembly’s winter session was opened after this group meeting, where I got the chance to follow the discussions from the gallery. At the first session, there was a vote about the urgent debates, both for the situation in Syria, and the functioning democratic situation in Turkey. Both debates where later held. After the session it was time for committee meetings and I chose to join the committee on legal affairs and human rights. The discussions at the committee meetings were preparing for the session and the meetings, the agenda contained for example discussions about challenges with online media and journalism, which were interesting. After this the day continued with the second sitting. Under this sitting the minister of foreign affairs of Cyprus presented communication form the committee of ministers.

After the second sitting, there was one group meeting left on the program. I prepared the meeting like I did in the morning, and this time the ALDE group got the chance to discuss with Michael Georg Link, Director of OSCE/ODIHR.

The discussion focused on cooperation between PACE and OSCE/ODIHR in election observation missions and was very interesting. After this it was time for the more informal program: the ALDE dinner at a really beautiful restaurant, where I got the chance to discuss politics and get to know the members of the ALDE parliamentary group.

Tuesday started with committee meetings and right after them, the third sitting. At this sitting we got the chance to listen to the President of Cyprus who first gave a speech, and then answered some of the questions from the different groups. A lot of the discussion was focused on the Cyprus chairmanship of the Council and the situation in Cyprus. After the sitting, it was again time for the committee meetings and then the forth sitting. At the forth sitting a debate about the attacks against journalist and media freedom in Europe was on the agenda which, was interesting after hearing almost the same debate at the committee meeting the day before. On Tuesday evening, a concert was arranged for president of Cyprus, which I attended. It was very beautiful and afterwards there was some time to mingle and eat. Here again I got the chance to again meet some new and interesting people.

Wednesday started with ALDE´s group meeting in the morning, which I again prepared. After this the fifth sitting took place. The greatest discussions of the day could have been the functioning of the democratic institutions in Ukraine or the vote about the online media and journalism. The resolution about online media and journalism that more actions should be taken by the member states to reduce human rights violations online was accepted but the Ukraine reform program was down voted. At the sitting number six on Wednesday evening I also listened to the speech of the Romanian president. In the evening, I attended the new year’s wishes to members at the parliamentary assembly and the institutions at the council of Europe held by Mr. Ronald Ries, mayor of Strasbourg at the town hall of Strasbourg, which was a beautiful building. Here I also got the chance to meet interesting politicians from different countries.

On Thursday, many of the members of the Parliamentary Assembly had to return home, but the sessions continued. The day started with the daily committee meeting. I did not have time to attend all the committee meetings during the week because the secretary general sometimes had some other tasks for me.  In the morning, the seventh sitting was about the urgent procedure or current affairs debate. The eight sitting in the afternoon for example, was about the need to reform European migration policies. The debate was very interesting, but in the end the resolution was down voted. After the debates, I decided to go and look at the beautiful town and surroundings before I had to leave France the next morning.

After all the experience was great and I learned so much and saw all the places and got a practical insight into the things I had been reading about in books during my studies. I enjoyed my stay and I hope I will be back in Strasbourg both for politics and sightseen just because the town is so amazingly beautiful.

Frida Sigfrids is a second-year Public Administration student at Åbo Akademi, a Swedish speaking university in Turku, Finland. She is also a board member of the Finnish liberal youth organization Svensk Ungdom.