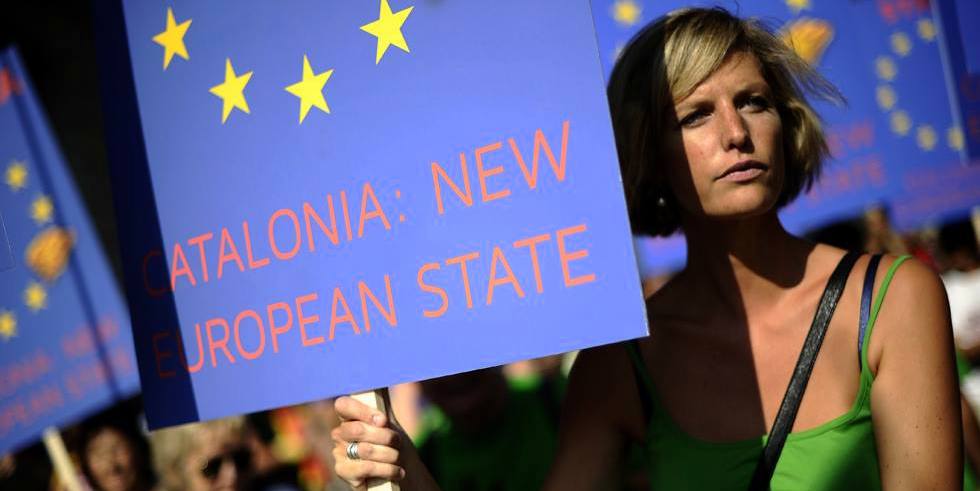 While travelling abroad and attending international events, I’ve encountered a range of different views about the Catalan independence process. Many are well-informed and sympathetic, however a few compare Catalonia’s   with other struggles for independence – that may seem similar at first, but which are in fact  completely different –  and find that reason enough to oppose the Catalan democratic bid. Others, with no ulterior reason to oppose it, simply seem indifferent on the basis that they’re not interested in cultural wars or what they see as a nationalistic conflict in an interdependent, global world. Understanding and respecting all three perspectives, I feel compelled to ask, what would you do if you were Catalan?

Our reasons for independence are rooted in our thousand years of history, our strong economy, our unique language and culture, our commitment to democratic values, and our will to self-determination. However, I will not be elaborating these. Instead, allow me to explain the more recent developments.

It all started after the Referendum validating a new Statute of Autonomy in 2006. The Spanish Constitutional Court (TC), after an appeal lodged by the two main Spanish parties, ruled against most of the statute’s new articles in 2010. And that’s when the widespread grass-roots, pro-independence demonstrations began, with over 1.5 million citizens protesting in the streets for five consecutive years on the Catalan National Day, Sept. 11th. If greater autonomy was not accepted and the votes cast in a referendum were overruled by the courts, the only alternative options were resignation and surrender – or independence.

Ever since, we’ve been in the midst of an escalating political conflict in which Catalan institutions seek an agreement to hold a binding Referendum and Madrid seems willing to do everything necessary to avoid the celebration of such a plebiscite.

Former Catalan President Mas has been accused of disobeying the TC for allowing a non-binding consultation on independence in 2014, in which over 2.3 million people participated. Both president Artur Mas and Francesc Homs, former minister of the Presidency of the Catalan Government and, until a few months ago, MP in the Spanish Parliament, have been condemned and barred from holding public office. They’ve been ousted from the political system for debating and voting. Now Carme Forcadell, speaker of the Catalan Parliament, faces the same accusation and possible outcome for allowing a debate on secession.

Recently, several journalist and judges have uncovered a major democratic scandal affecting the highest ranks of the Spanish secret police, the former Spanish Minister of Home Affairs, and major Spanish media . Operación Cataluña they called it, and its main goal is to produce fake news about Catalan pro-independence politicians, hence damaging the public image of Catalan parties. Among others, this affected former Mayor of Barcelona and member of the Catalan Democratic Party Xavier Trias. A few weeks before the local elections, the Spanish secret police and the UDEF, department responsible for fiscal crimes, produced a document alleging that Mayor Trias had 13 million euros in Swiss bank accounts. Newspapers and TV shows spoke of nothing else during the electoral campaign, while the mayor denied everything. Mayor Trias lost the local elections in Catalonia’s capital city by just one seat to far-left populist Ada Colau, who used the fake news in all her rallies. When all the Swiss banks proved the information to be false and forged, it was too late; the harm had already been done.

I could go on, explaining other false accusation later dismissed by the courts, or give never-ending examples of how the Spanish government negatively affects the Catalan economy, vetoing Barcelona Airport , investing ridiculously small amounts in Catalan infrastructure and wasting millions on economically unviable projects, such as high-speed trains to tiny cities while Valencia, Barcelona and Paris remain unconnected.

So if you were Catalan, what would you do? We have little doubt: democracy is the only way out, and that’s why the Government of Catalonia has announced the date and question of the referendum on self-determination. It will take place on the 1st of October with the following question: “Do you want Catalonia to be an independent state in the form of a Republic?”. Europe should welcome a referendum in Catalonia, it’s a good solution and democracy should be acknowledged as the only way to solve this problem; asking our society to peacefully and democratically decide what future it wants. The Spanish Government has repeatedly said it will not allow the referendum to take place. And I wonder, what will they do to stop it? As President Puigdemont has said: “Madrid doesn’t have enough power to stop so much democracy”. For centuries Catalans have had to accept Spain’s domination, the fear of the use of force to which Catalonia has been subjected to was enough to quiet our legitimate national ambitions. Today, in Europe, this is no longer the case, and that’s why we love democracy.”

Victor Puig is the International Officer of the Catalan Democratic Party. He studied at the Lycée Français of Barcelona, then he studied Law at Universitat Autònoma de Barcelona, and is currently the chair of the local party, and member of the city council in Rubí, a city of 76.000 inhabitants located around 30km from Barcelona. You can reach Victor at victor.puig@partitdemocrata.cat