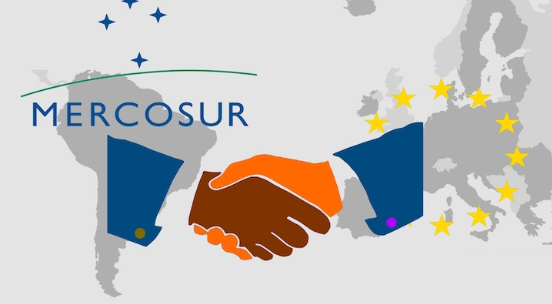 Europe and South America are 6 thousand km apart but political and social ties are only to increase with the EU-Mercosur free trade agreement. Copyright Anabel González 05 July 2019 voxeu.org

After 20 years of negotiations, the free trade agreement between the European Union and the South American common market (Mercosur) becomes reality. It is an agreement comprising political, environmental and social cooperation in two areas totalling 773 million people and 122 billion euros of commerce in goods and services.

Nonetheless, the agreement has been framed as a choice between the environment and economics, falling prey to controversy.

There is a risk it is ditched, as Greens across the world ferociously oppose it (with the sad irony being that Greens are the first ever to oppose economic growth), but mostly as Irish, French and Argentinian executives have voiced concerns on the topic.

Now we all know the non ratification is not primarily due to concerns over environmental reasons, as it is usually said, but actually to more practical issues.

We all know meat production will not increase as a result of the harsh quota imposed in the agreement and we all know France and Ireland’s concerns are more related to regional agribusiness lobbies than to Brazil’s president rhetoric.

But let us understand that the EU-Mercosur Agreement is good for the environment, not bad.

First, the agreement puts protection of the environment as a cornerstone, improving the already high standards of previous Free Trade Agreements. Both parts establish that trade and trade incentive schemes does not come at the expense of environmental impacts. It is agreed that regulatory and risk management decisions are always made considering that there is danger for the environment although evidence is not decisive (precautionary principle). And finally, both signataries reinforce their participation in other multilateral environmental agreements (Paris Treaty) and make commitments to fight deforestation and promote rational agricultural management. Others may be read in tables 1 and 2.

There are numerous reasons why, at its full extent, the trade agreement makes all efforts to put environment first, irrespective of not being an environmental agreement in itself.

Then because, by definition, trade will bolster the best practices and standards in services and goods and thus protection of the environment will be promoted.

The Sanitary and Phytosanitary measures chapter establishes that all requirements of EU and MERCOSUR countries are met when exporting or importing products, especially bearing in mind the EU stringent standards for the commercialization of many agribusiness products (see table 1) and as the German chancellor put it, not signing it will not reduce one hectar of illegal logging (Americas Quarterly, September 2019). Indeed as we understand it, signing it will make consumers have power on the origins and supply chains of their products. Consumers will be vigilant as to how their products are made, what their manufacturer is and how environmental considerations are made on it.

Therefore, as young liberals, we need to be clear sighted.

There are no reasons why deal that was twenty years in the making must be rejected based on one bad and temporary politician and we cannot yield to a form of superstition that opposes everything that is not considered “green” by the simplistic left-right narrative regarding the environment.

Rules based trade is actually the first step towards enhancing the development that Latin American economies need and the best way to make way for actual environmental technologies.  the best way to defeat populists and alt-right movements trying to abolish the multilateral international order based on organizations like WTO or the UN. And also the best way to make individuals to counter illegal or reckless economic exploration of resources by the power of their consumer choices.

Free trade is one of the best tools to actually give solutions for Climate Change.

Let us be mindful about that.

Worth taking a look at:

Tiago Dias is a graduate in Environmental Sciences from the University of Porto and the European Liberal Youth Individual Members’ Section delegate in 2019. He likes to read and write in his free time.