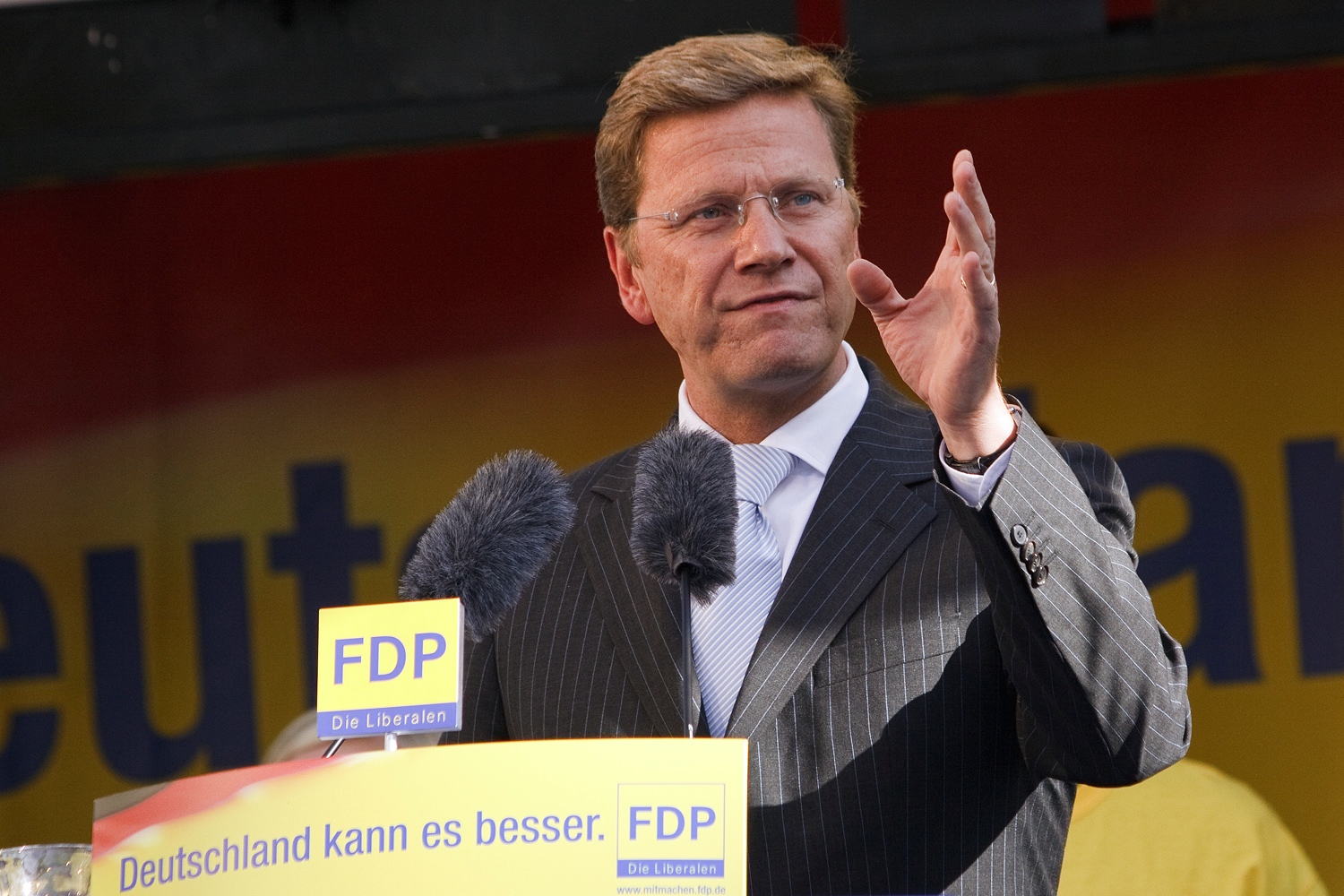 Liberal Germany is mourning. On the 18th March 2016, it lost not only a former vice-chancellor, but also a remarkable person and politician: Guido Westerwelle.

Especially for members of the Junge Liberale (Young Liberals) – the youth organization of the liberal German party FDP – Westerwelle, one of its cofounders, will always remain a role model.  He assumed the presidency of the JuLis in 1983, after they had become the official youth organization of the FDP. In 1988 the graduated lawyer became a member of the federal executive board of the FDP, becoming its general secretary in 1994. On the 4th May 2001, his stellar rise through the party ranks cumulated in the post of party leader, the youngest to date at the age of 39. With this he thwarted accusations of leading the party of the “higher earners”. Instead, he defined the FDP as the party of “those willing to accomplish”.

For the parliamentary elections for the Bundestag in 2002 Westerwelle competed as the first candidate for the chancellorship in the history of the FDP. For this, he started an election campaign that can only be described as loud and boisterous. Though it caused the reputation of the FDP as a “fun party” amongst critics, Westerwelle stood up for the campaign’s “Project 18”: the aim to increase the percentage of vote for the FDP to 18 %. Whether it was a visit to the Big-Brother-container, the tour in the “Guidomobil” through Germany, or election advertisement on the sole of his shoes – all this was worth the effort. During his energetic campaign, Westerwelle actually managed to get into conversations with people who had turned away from politics, and communicated the liberal ideal very successfully. After a slump in the polls, he was able to lead his party in 2002 from 6,4 % to 7,4 % in the parliamentary elections, in 2005 to 9,8 % and in 2009 he reached the historical result of 14,6% for the FDP.

With this excellent result the FDP, headed by Westerwelle, became junior partner in a Christian-liberal coalition with the CDU/CSU under chancellor Angela Merkel. Westerwelle was actually expected to be the new Minster for Finances, but in tradition of the FDP and following his role model Hans-Dietrich Genscher, he finally became Minister of Foreign Affairs. In this position, he spoke up especially for European integration. His motto was that “Europe does not just have its price; it also has its value.” The biggest decision of Westerwelle as foreign minister was to abstain from voting on behalf of Germany in the UN Security Council on the matter of the military intervention in Libya. Though this decision was popular among the populace, it was condemned by critics as a relinquishing of international responsibility to protect the lives of innocent people.

The FDP had promised tax cuts, or rather an “easy, low and fair” tax system and had mainly focused on economic issues during the election campaign. From his position as foreign minister Westerwelle did not succeed to implement these promises, which left many FDP voters disappointed. This led to election defeats for the FDP in three federal states in 2011. At that time Westerwelle came under fire, both from within and from outside of his party. Because of this, he did not put himself up as a candidate for the party leadership at the FDP-party conference in May 2011, and the previous health minister Philipp Rösler became his successor. Westerwelle then also passed his post of Vice-Chancellor on to Rösler.

In 2013, after the FDP failed to reach the election threshold of 5%, and had to leave the Bundestag, it also became politically quieter for Westerwelle. In December of the same year he established the non-profit “Westerwelle Foundation”, that fosters and strengthens the middle class in countries that are in political turmoil, in order to restore democracy, and market economy, the rule of law and tolerance. For this the foundation mainly focuses on setting up business and education.

On the 20th of June 2014 Westerwelle was diagnosed with acute myeloid leukemia (AML) for which he immediately went into treatment. After more than four months of stationary treatment and a stem-cell transplantation, he was finally able to leave the hospital. One year later, Westerwelle returned into the public eye, when he presented his book about this difficult time and had two TV appearances. The formerly loud and boisterous Westerwelle had given way to a quiet and reflective man. Although he remained very hopeful all the time, Westerwelle lost the fight against blood cancer. On the 18th March 2016 he died at the university hospital in Cologne at the age of 54, as a consequence of the leukemia treatment.

In Guido Westerwelle we lost a big, albeit sometimes polarizing, liberal personality. Called “the Statue of Liberty of the German Republic” by his fellow party member Wolfgang Kubicki, like no one else, Westerwelle embodies the rise – but also the fall – of the FDP. There are many things you can accuse him of, but of one thing you certainly can’t: having no courage. From his striking election campaigns, to his boisterous behavior and not least his outing as a gay man and marriage with his longtime partner; Westerwelle didn’t just promote his values of being self-reflective and free – he lived them too. He has influenced German liberalism for many years to come, and will remain an important figure for the FDP. Liberal Germans are in mourning and miss Guido Westerwelle.