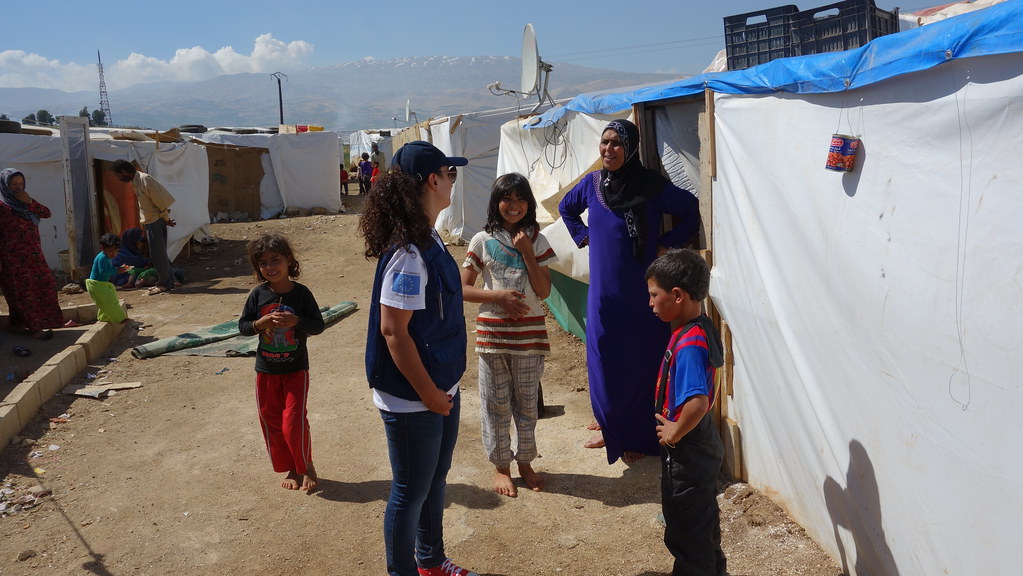 Lebanon became the center of international attention when a warehouse full of fertiliser exploded in Beirut and killed 200 people. We at Libel have written about the accident itself and the political upheaval that has taken place in Lebanon before, during and after the explosion. Now, I would like to bring a new perspective to it: the refugees.

A few weeks ago, Facebook reminded me of a graph I shared some four years ago: it illustrated the pressure that the refugees fleeing from Syria put on Lebanon, and compared it to the EU. The graph made it very clear that far greater pressure was put on Lebanon than the EU. Back then, the EU included the UK, so the total population of the union was somewhere around 500 million. Now compare that with Lebanons just over 6 million. If one million refugees arrive in the EU, they are a marginal change in the local demographics. But when that amount of people arrives in Lebanon, it will change everything: one in six of the countries inhabitants is now a refugee – unable to legally work, study or connect with their families and almost entirely dependent on others. That makes Lebanon the country with the highest number of refugees per capita (156 per 1000 citizens), meaning that the country’s population grows into 8 million if you include residents without citizenship.

Now, what you have to keep in mind is that Lebanon has always had a Syrian minority, even before the Syrian civil war began. The Syrians have been migrating to Lebanon as workers ever since the countries became independent. Furthermore, Syria occupied a sizeable part of Lebanon from 1976–2005. Then there’s the fact that like in any conflict, the displaced people tend to migrate to neighboring countries rather than to entirely different continents, simply because they’re unable for whatever reason or they believe that the displacement is temporary.

In recent years, the pressure has mounted in Lebanon: just last year the government ordered that all buildings that could potentially become homes are to be torn down if located in a refugee camp. In the same year, the Free Patriotic Movement, a conservative largely Christian party founded by the current president Michel Aoun, also started an active hate campaign against the Syrians who were working illegally in Lebanon, stating that the jobs should be reserved for the Lebanese people.

The biggest problem for these people in Syria is the lack of legal status, which has put them into a stagnant position, unable to work or move freely. This also means that many basic services are simply out of reach: many families have to survive with only $2.9 every day and little over half of the children coming from refugee families don’t attend any schools.

The refugee community has also been hit by the Covid-19 pandemic, just like everyone else. The refugees’ freedom of movement is already restricted so that they have to spend most of the day in the camp. In a tightly-packed community like this, it’s close to impossible to maintain adequate distance from each other. Nonetheless, many people in the camps are more afraid of starvation than the virus: life wasn’t easy before the pandemic and these kinds of health concerns will only make it worse. The Syrian refugees have also faced even more discrimination and hatred from the local Lebanese as the pandemic rages on.

As the Lebanese keep protesting against their government, some even claiming to be at war with their government, the situation can be expected to worsen. The more unstable Lebanon grows, the more the most vulnerable people there will suffer. And as mentioned before, some political forces have already targeted the Syrians working illegally in Lebanon. Corruption has also been wide-spread in Lebanon for decades already, which has fueled the anger of the people and their distrust for the government. However, in May, President Aoun brought up the Syrian refugees rather than the corruption as one reason why things have gone south in the country. So we have already seen refugees being used as a scapegoat by the highest-ranking political figure in Lebanon.

The problems in Lebanon and in the neighbouring countries are far too complex for them to just fizzle out, especially when bigger military powers have their own pawns in the play. This is why we need to make an effort as the international community: end the Syrian civil war and calm down the protests in Lebanon. Only then can we start to plan further solutions to the social problems, such as the legal status of Syrians in Lebanon. The pressure put on a small country like Lebanon has been huge, over-powering even as the protests have already ousted two prime ministers (Saad Hariri and Hassan Diab). The refugees are not the cause of problems but merely a manifestation of deeper problems. And seeing refugees as problems is nothing more than just digging the problems ever deeper.