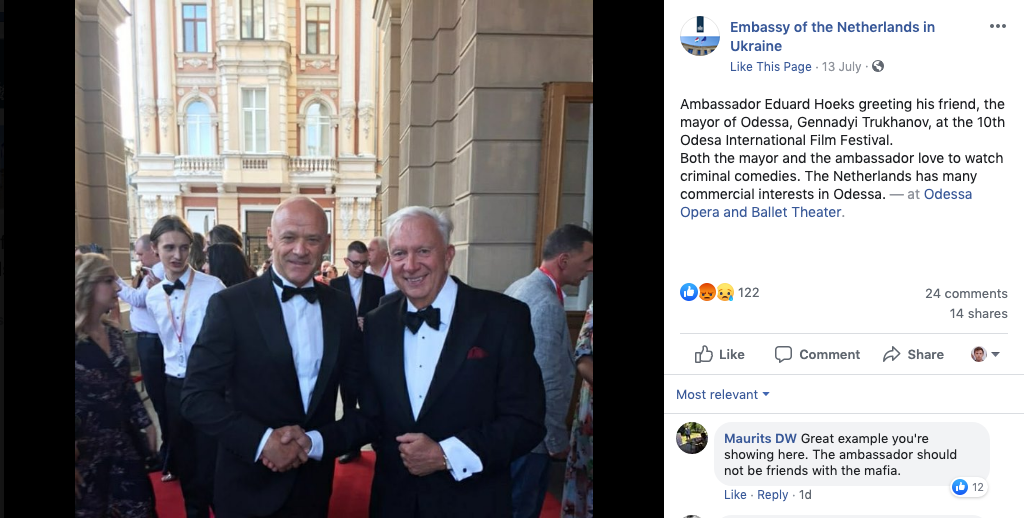 On Saturday July 13th Eduard Hoeks, the Dutch ambassador to Ukraine, visited the Odesa International Film Festival in the Ukrainian port city of Odesa. During the event, the ambassador took a picture with the mayor of Odesa, Gennadyi Trukhanov. The Dutch embassy posted the picture on their official Facebook page on Saturday evening, stating that the two are friends and that “The Netherlands has many commercial interests in Odesa”. This might not look odd at first sight, for mayors and ambassadors often engage in meetings together and friendships might develop out of this. However, Gennadyi Trukhanov is not your average friendly mayor. Trukhanov is notorious in Ukraine for his alleged ties to the Oil Mafia and for his crackdown on local anti-corruption activists, which is why I believe that ambassador Hoeks should not want to be seen with Trukhanov.

In the past year, many of Odesa’s anti-corruption activists have been attacked in the streets of the city. These activists believe that Trukhanov is behind the attacks. Many of these activists are member of the Ukrainian liberal party Sila Ludei (Power of the People), which is a small party that is represented in many cities and villages throughout Ukraine. Activist and head of Sila Ludei Odesa Oleg Mikhailik is amongst those attacked in Odesa. On September 22, 2018, Mikhailik was walking in his neighborhood when a sniper bullet hit him in the chest. After having spent quite some time in a hospital, German doctors in Munich managed to remove the bullet from his chest. Mikhailik’s activism has turned him into a famous Ukrainian, and he has received visits from dignitaries, such as the American and German ambassadors to Ukraine and Members of the European Parliament. When I confronted him with the news of the friendship between the Dutch ambassador and the mayor of Odesa, Mikhailik called it a “betrayal to the progressive civil society in Odesa, whom Trukhanov has been trying to shut down even by killing because of their very clear and loud voices”.

The project director of the German liberal Friedrich Naumann Foundation for Freedom in Ukraine, Beate Apelt, also finds it difficult to understand why the Dutch ambassador is friends with Trukhanov. “If we want Ukraine to go a European way I think we should support those Ukrainians who stand for European values, the rule of law and the fight against political corruption”, she says.

As a Dutch citizen who has lived in Ukraine, I believe it is very shameful that the Dutch government throws away its European and liberal values because of commercial interests. Although I acknowledge the importance of commerce between Ukraine and the Netherlands for both countries, I believe that The Netherlands should show Trukhanov that criminal activities should not be rewarded. I believe the friendship between the Dutch ambassador and Gennadyi Trukhanov is a betrayal to the Ukrainian people, who have fought and are still fighting today for European liberal values. That is also why the picture that was posted on the Dutch embassy’s Facebook page has received many negative comments from angered Ukrainians. Furthermore, the fact that the Dutch ambassador and the embassy employees are not ashamed to share a picture of the two friends together on their official Facebook page is a clear sign that the embassy staff is disconnected from Ukrainian society, and has no clue of what is going on in the country – a diplomat should not be seen together with an alleged criminal.

Maurits Foorthuis is a Master student in International Relations and in Russian and Eurasian Studies at the University of Leiden in The Netherlands. Last semester he did an internship with the Friedrich Naumann Foundation in Ukraine. Maurits is a member of the Dutch social liberal party D66 and its youth organization the Young Democrats.