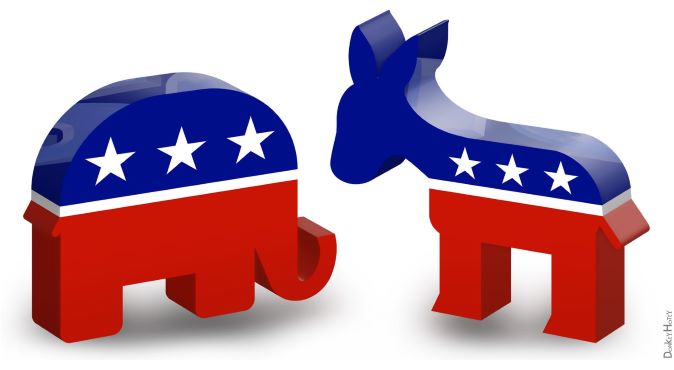 The politics of the United States of America are somewhat different compared to other liberal democracies across the world. It is often difficult to summarize the catalysts, events, and ideologies that have shaped the American democratic system. A constant in the ever-changing political landscape in the U.S. is the two-party system, an unchanging and unyielding force of power and partisanship.

Scholars have divided the eras of political parties of America into six systems. While the dates of these systems vary, the basic attitudes and influences defining each era are clear. The First Party System focused on the founding of the new country and the struggles between Thomas Jefferson and James Madison’s Democratic-Republican Party and Alexander Hamilton’s Federalists. The Second Party System saw the dominating Democratic-Republicans splinter into the Democratic Party (the oldest voter-based political party in the world) and the Whig Party. The Third Party System saw the rise in race issues as the abolitionist Republicans rivaled the Southern-based Democrats, and solidified the two parties that have dominated American politics for more than one-and-a-half centuries. The Fourth Party System was known for the First World War and the Progressive Era.  Following the Great Depression, the Fifth Party System arose with Franklin D. Roosevelt’s Democrats winning elections in landslides due to the success of the New Deal. The Fifth Party System saw the Democratic Party begin to take on the mantle of civil rights leadership and become the more progressive party. Last in our history lesson is the Sixth Party System, our current party system.

Now of course, I would be remiss not to mention the discussion of the possible Seventh Party System. Some political scholars and thinkers believe that the 2020 presidential election, or perhaps even earlier signs, heralded the emergence of a new system. One could argue that the presence of former president Donald Trump as the key figure of the GOP is a sign of party realignment. The censuring and even removal of Republicans who are critical of the former president is indicative of a shift from traditional conservative values to “Trumpism” within the Republican Party.

This idea of party shifting is not unique to Republicans. While Democrats have historically had a “large tent”, the oldest political party in the world has felt the strains of ideological differences. U.S. Representative Alexandria Ocasio-Cortez, hailed as a face of the young progressive movement, put it best in an interview with a journalist from the New York Intelligencer. “In any other country, Joe Biden and I would not be in the same party,” she stated[1]. The date that interview was electronically published was January 6, 2020, exactly one year before far-right, Trump-supporting insurrectionists invaded the capital. Ocasio-Cortez is right, of course. In most other Western democracies, many different parties compete with others, representing a wide variety of positions and views for voters to choose from.

It seems as if history and past statements and publications keep trying to shove information in our faces, predicting the downfall of the two-party system of America. Researching for this article, I came across a September 2019 piece by Post Alley, a publication by Seattle, Washington-based journalists. Chris Vance, a now-independent, formerly Republican politician, writes an interesting sentence. “If [the Democrat’s] liberal wing prevails over time, moderates will become homeless, which must inevitably lead to something new in America’s party system: a three-party system.”[2] Vance predicts that then-candidate Biden’s moderate ideology would win over Republicans unhappy with Trump, including states like Texas, Georgia, and North Carolina. Despite the fact that of these, only Georgia voted for Biden, Texas and North Carolina saw winning margins for the Republican nominee shrink to historic lows. It is, I suppose, some reassurance to those fearing a big shakeup in our political system, but the election of Biden should not be hailed as an “out-of-the-woods” moment for the growing forces behind a politically-realigning revolution.

The Democratic Party has struggled with party in-fighting and the divide between moderates and progressives couldn’t be deeper, nor come at a worse time as the Senate is evenly divided and the House is only held by a slim Democratic majority. The Republican Party is no better off, with members coping with how to deal with the far-right faction of the party and its conspiracy-believing leaders.

I believe that a Seventh Party System is coming. I do not yet know how or which party will be breaking, nor how American politics will be changed. America has not had a federal legislative chamber held by a coalition of multiple parties since the House of Representatives of the 65th Congress in 1917. A major change must take place for the two-party system, which has been so deeply engrained in American law and culture, to break.

Meanwhile, all eyes are still set on the struggles of the oldest, still existing democracy in the world as it, like the rest of the world, navigates the great democratic experiment.