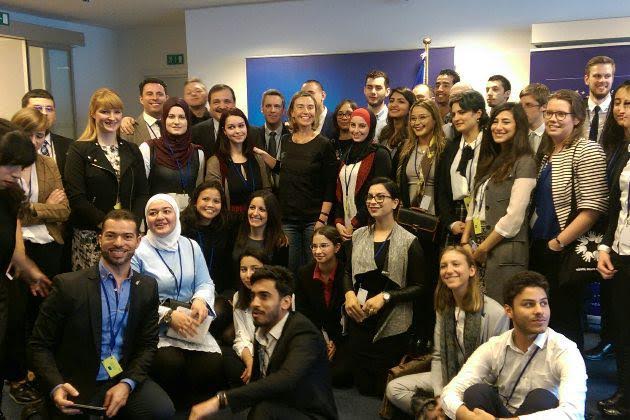 On the eve of the 60th anniversary of the Rome Treaty, High Representative for Foreign Affairs and Vice-President of the European Commission Ms Federica Mogherini invited 35 young people from across Europe, the Middle East and North Africa for a 2 hour sit down at the European External Action Service. The topic, how can young people shape the future of the region through dialogue and cooperation? 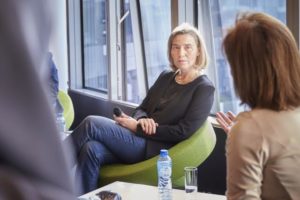 Discussing a range of issues from education to mobility, young people cast a light on the common challenges they face across the region. We highlighted the positive role young voices can play in fostering change in our communities, whether that’s tackling LGBT+ rights in Tunisia, combating child brides in Jordan or reshaping the narrative towards immigrants and refugees in Europe; as a group we demonstrated the ability to lead today, not only in the future. Following the two day visit to Brussels it was clear to all involved that working across the region, with engaged young people, we can ensure that cooperation, prosperity and the unity of the European project can continue for another 60 years.

As a result a new initiative has been launched by the EU, ‘’ which builds on the previous success of ‘Young Arab Voices’ to foster change and engage young people in their communities. The aim now is to open up all channels for young people through large-scale communication and advocacy in partnership with EU delegations across the region. With the commitment of €3.2 million (2017-20) there will be the capacity to expand debate and dialogue as well as help young people develop the skills they need to play an active and constructive role in society. 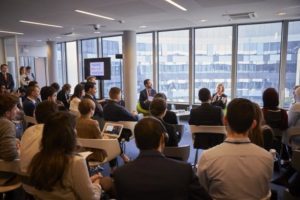 Further to this, Ms Mogherini stated for the first time that the European Commission will seek ways to implement the Security Council Resolution 2250 on Youth, Peace and Security. A landmark resolution, which sets out, the vital role young people must play in peace building efforts. The shift in narrative, highlighted in the resolution, framing young people as positive actors for change and vital for peace building strikingly contrasts the common view of young people as victims and perpetrators of violence. At the heart of “Young Mediterranean Voices” is a goal to empower young people, particularly through dialogue and skills training. Therefore, we are calling for examples of good practice from across the globe and for young people to get in touch with their stories and the lessons we can learn from them.

The Europe Union has never faced so many simultaneous challenges; the largest humanitarian crisis since the Second World War, the uncertainty of Brexit and rising populist sentiment. Coupled with the unsettled international order led by nationalists to the East and the West, it is safe to say the EU needs a new direction and new voices. We believe our young voices must play a role today, not just the future.

Murray Hawthorne is President of Leeds Young Liberals and an active campaigner for the Liberal Democrats in the UK. He is currently a member of IFLRY’s working policy group on the ‘Israeli-Palestinian Conflict’ and is studying Arabic and Politics (BA) at the University of Leeds.