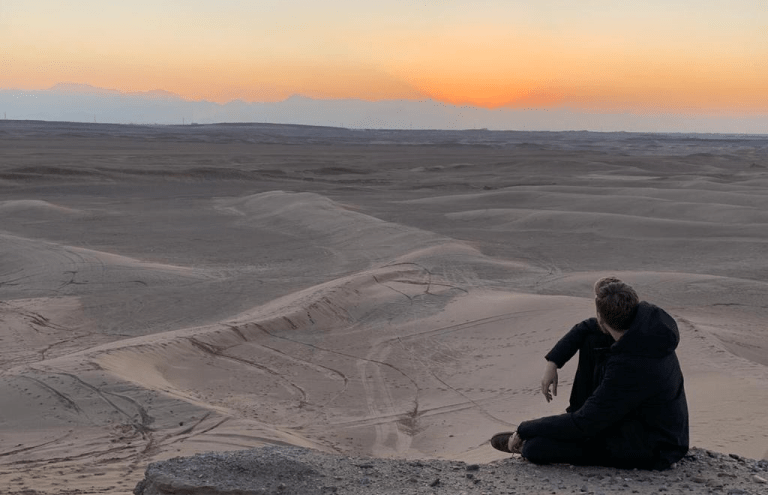 Ravi sitting on a dune in Iran.

This article originally appeared DEMO, the magazine of Jonge Democraten.

“Do be careful! As I understand it, all US citizens have to leave the country, and the Netherlands is an ally…” I had been in Iran for almost a week when my mother sent me this worried text. This did make sense. After all she works for a Dutch news broadcaster, which means she is aware of stuff like this.

I am very interested in international politics and therefore I also knew what was going on, but this did not stress me out. Life goes on regardless. I got my mother’s message while I was squeezed into a small Peugeot car, together with six other people. The five other passengers were no acquaintances, or fat German tourists, but five Iranian women, who had started a conversation with me in a café. This is not uncommon in Iran. Suddenly you are in a car with loud music and new acquaintances, on your way to some interesting place, or at least a good story.

The Iranians I met had mixed feelings about the international tensions. In Isfahan a family started talking to me in the street, asking whether we were afraid, and why we were still in the country. They did not live in Iran themselves and were going to leave again as soon as possible. Others instead told us that we did not need to fear, but of course my favourite commentary on this geopolitical issue came from a taxi driver: “No problem! America 1 missile, Iran 1 missile, finish.” He was not far off.

On my second day in the country, the Dutch deputy ambassador had told me that Iran is a very diverse country with many different subcultures. I certainly experienced this myself. I met people who were vehement opponents of the regime, who told me things that would have certainly gotten them in trouble. But I also met someone who was a strong supporter, who told me that there were many ‘fake Muslims’ in Iran. He pointed to a couple we walked past, who gave each other a hug to say goodbye. This was not allowed apparently.

When I (optimistically) asked him how he would feel if I came to Iran with a female friend he started to laugh and said that it would be okay because I was a guest, and this is taken very seriously by Iranians. He subsequently invited me over for dinner.

On mosques, cars and in the street the images of Quassem Soleimani, the Iranian general that was killed by the US in Iraq was displayed, and black flags hang everywhere as a sign of morning. I was in Iran at the time and had just agreed to go skiing (which is possible in Iran) together with another Dutchman and perhaps a Romanian.

I had already booked my hostel up in the mountains, and a girl form our hotel had just called us a taxi. Driving to the mountains takes a few hours, so you cannot just hail a cab in the streets. Everyone was drinking tea downstairs when my phone vibrated: the ski resort, along with all the others in Iran, had been closed for three days of mourning.

After that life went on as normal. Everyone carried on drinking tea, eating kebab, smoking cigarettes or shisha. I saw much of the country and made so many pictures that I had to delete half of the apps on my phone, just to make enough space for them. Apart from the black flags and Soleimani’s face everywhere, daily life started to become normal again…

… until Iran (accidentally) shot down a Ukrainian passenger plane with two rockets. the airplane had just taken off from Teheran’s Imam Khomeini international airport, through which I had entered the country and through which I would depart again. Chaos ensued: a few hours before I was supposed to fly from Shiraz (in the south) to Teheran I received an email from Turkish Airlines saying, ‘FLIGHT CANCELLATION’.

Strangely, I could not help but laugh. I looked up at my new friends from the Philippines and joked that I was not leaving them after all but was going to stay a few more days. Without any assistance from Turkish Airlines I decided to buy a flight from Shiraz to Dubai, and from there onwards to Amsterdam. A few days later, a few hours before my flight to Dubai, it turned out that flight was also cancelled. This time my reaction my laughter was more nervous, and I felt a strong sense of disbelief. My Filipino friends had left already on another flight, and I only had two days left on my visa. This was comforting on the one hand (worst case scenario they would put me on a random plane home), but the prospect of being in Iran illegally, potentially at the start of a war, did make me feel tense.

Eventually I spent my last night in the most luxurious hotel in Shiraz, frequented by Russians and Saudi Arabian oil(sheikhs?). The next day I was able to fly to Dubai, but I had to book myself another flight from there to Amsterdam, which left a day later.

A few weeks after I returned the first Corona patient in Iran was diagnosed. Not long after the country became one of the worst hit globally. And yet I am certain I want to return. Because of the kindness of the people there, who still see you as a traveller from distant lands and are keen to talk to you. Because of the culture, which makes you doubt the importance of material wealth. And for the adventure of course, because it certainly was that.