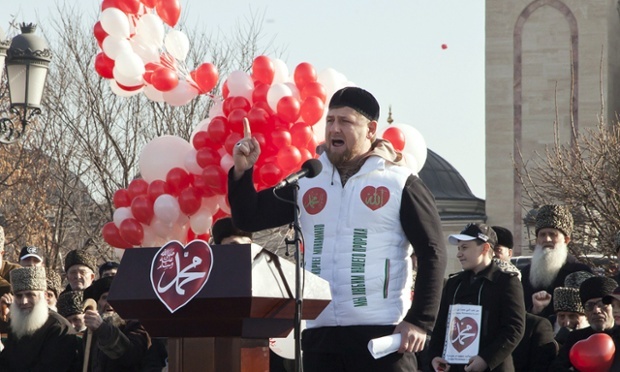 Chechen president Ramzan Kadyrov, who attended the wedding, speaking at a rally in January in protest at Charlie Hebdo’s cartoons of Muhammad. Photograph: Yelena Fitkulina/AFP/Getty Images

For the past few weeks a huge marriage scandal has been dominating discussion in Russia. The President of the Chechen Republic, Ramzan Kadyrov, gave his blessing to the marriage of a 57 (according to some sources 46) year old Police Chief and a 17 year old girl. The public outcry went in several directions, with calls of forced marriage, arranged marriage and polygamy. The Police Chief already has a wife – who he is still officially married to. Neither forced, nor under-age, nor polygamous marriages are permitted under Russian law – even those these are fairly common in Chechnya.

I will stay away from a discussion of forced marriage. It’s clear that this kind of marriage could not be accepted in any more or less democratic society. As well as this, it is obvious that even if this marriage was organised without the wish of the bride, we will probably never find absolute proof that this is the case. Marriage under the age of 18 is also very questionable, but is permitted more commonly; in some European countries, for example, under 18s can be married under certain circumstances, such as pregnancy. Whether or not this is acceptable it is more common, and as such not distinctively questionable with regards to this case.

There are two points that I want to discuss in particular. These are the total disrespect of Russia’s own laws being shown by Russian governmental representatives, and secondly, the question of polygamous marriage and whether it is possible to adapt this into law. This suggestion was raised directly after the wedding which took place.

It is problematic to have a state like this. One that does not even follow its own laws. It is not only a result of an extreme level of corruption, which is becoming a part of day to day life in Russia. But, the fact that the Russian government, which could hardly be called democratic in any way any more, publicly stopped even formally showing respect to the rule of law should raise international awareness!

This case, so tragic for a personal life, could be a sad example of how legislation could also be broken in the future. It is impossible to predict how, when, or where, but the possibility has become a reality.

The second question is actually whether there is a possibility of legalising polygamous marriage in Russia. This kind of marriage has a direct impact on the position of women in society, and unfortunately, this impact has shown to be negative. A discussion about the legalisation of polygamous marriage in a country, where rates of leaving alimony unpaid are incredibly high, sounds completely out of place. However, nowadays the situation is not better either, with or without legal polygamy. It is clear, that there are a significant number of “second wives” in Russia that do not have any support or legal position in face of law. Still it seems to be very unclear if this law,  will actually in any way support position of a women or be more a permission for a man to “buy” himself a second toy. This is, of course, a difficult moral issue that cannot be decided on easily.

This case raises many issues, both moral and political. Whilst we can discuss about policy all we want, it is clear that this is an example of Russian officials using their position to flout the rule of law. If it starts here, where can it go?

Alena Santalainen from Finland, is currently studying for her masters degree in Austria.