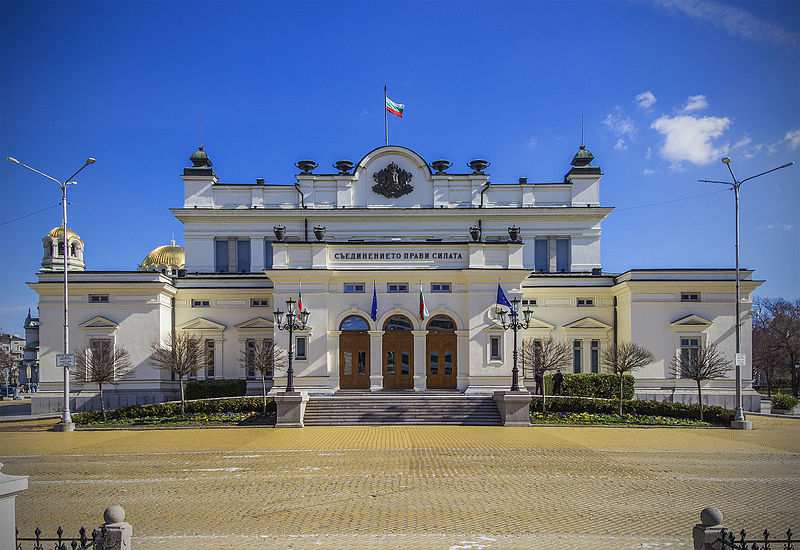 The Bulgarian parliament in Sofia

“I’m 50 years old and I have never thought of joining any political party, or being a politician – not in communist time, not in modern Bulgaria. But now I feel I have to go into politics, for us, for my children and grandchildren, otherwise we will lose our country forever.” With these words, Marin Marinov, a well-known local actor, opened a meeting of a new political coalition called “YES, Bulgaria”. Looking around the hall of the main festival and congress center in Varna, almost full on Sunday morning, I see many people nodding, some even have tiny traces of tears in their eyes.

On the 26th of March, Bulgarians will elect their representatives in the Parliament in an early election. YES, Bulgaria is a new movement which takes part in elections for the first time. It was formed in the beginning of 2017, by a former minister of justice, Hristo Ivanov, who resigned from his position due to inability to push for a judicial reform, which was intended to bring more checks and balances into the political system. The movement’s ideology is pro-European and it mainly focusses on fighting corruption. It seems like quite some people, disappointed in all existing parties, are inspired by Yes, Bulgaria. A lot of civic activists joined it as candidates and supporters.

YES, Bulgaria couldn’t manage to register as a political party before the elections, because of bureaucratic procedures and false complaints. Therefore, they joined forces and formed a coalition with two non-parliamentary parties – liberal DEOS and the Greens. What impressed me the most, is that they managed to gather more than 200 000 signatures in their support in just one (!) day in order to be registered for elections. I still can’t forget the struggle of gathering 40 000 signatures in St. Petersburg in 2011.

Bulgaria has the highest level of corruption among the EU member states. This slows down economic development, leads to a growing gap between rich and poor, raises distrust towards politicians and blocks social mobility. If you ask any Bulgarian on the street what is about the biggest issue facing the country, he or she will most probably say “mafia” or “corruption”. They say it is everywhere, and it is so bad, the worst in the whole World.

Having lived in Russia for 29 years, I still think that this is a bit overstated. It doesn’t seem to me that there is total corruption on all levels in Bulgaria. Public contracts going to favourable companies: yes. Politicians hiding their business interests in offshores: yes. Systematic corruption on each and every bureaucratic level: no. You don’t need to bribe someone to get driving license or to register your child with a kindergarten. Nevertheless, corruption really marginalises Bulgaria in the EU, which is sad for this beautiful country.

I have to say that fellow liberals from the Movement for Rights and Freedoms, a member of the ALDE liberal alliance in the European Parliament, contributed to Bulgarians’ distrust in politics. Delyan Peevsky, one of Bulgaria’s most odious MPs, who has a network of offshore companies, owns a lot of media in the country, has interest in rich tobacco company and is involved in almost every corruption scandal here, is an MRF member. He’s been in the Parliament since 2009 and is standing again this time. He uses his media power in full: tons of black PR is issued before the elections. Even the central election committee has acknowledged that.

From first glance, the Bulgarian political landscape seems diverse. Pro-European conservatives (GERB), occupying almost all regional and local positions of executive power and are feeling good controlling funds flowing from the EU. They have the support of the bureaucracy and women are sympathetic to its leader. The Socialists (BSP, which is a coalition of the former communist party, and other leftist parties) is supported by Russian propaganda and those, who are nostalgic for “good old times”, when the Soviet Union imported the majority of Bulgarian exports, paying for them handsomely. The party representing the Turkish minority (MRF) has the support of the Turkish minority. Though, in 2016, after an internal scandal, it was divided into two parties. We’ll see how the voices of local Turks will be divided. There are Nationalists, of different kinds. And finally, lots of smaller parties, which form different coalitions each election.

In addition, it is always a matter of discussions and investigations here, which politician has a background in the state security service in socialist times and hidden ties with Russia or Turkey. It is considered so important, that a new coalition “YES, Bulgaria” restricted its membership. Someone can’t become a member if he or she has served in state security.

In 2013 Bulgarians went to streets to protest against an electricity monopoly. They managed to defeat the government, but they didn’t manage to ensure a majority in the next Parliament to implement all promised reforms. Naturally, this has caused disappointment with politicians and politics. Some were disappointed even earlier, when they realised that EU membership doesn’t really help to get rid of local clientelism. But the system doesn’t seem hopeless, if it is still possible for undesirable oppositional movements to speak up at the most central well-known venue in the city.

I have hopes for this country. I hope that Yes, Bulgaria will profit from the example of large protests against corruption in neighbouring Romania, and will encourage Bulgarians to vote for them enough to make them overcome the 4% election threshold. I hope that “YES, Bulgaria” will keep itself clean from people who are dishonest and greedy for money people, who might get in power under this new brand. I hope that our fellow liberals from MRF will stick more to principles and less to rich persons. I hope for the best.

P.S. Remembering my Russian experience, I’d better declare that everything written in this article is only my personal opinion based on observations and feelings.