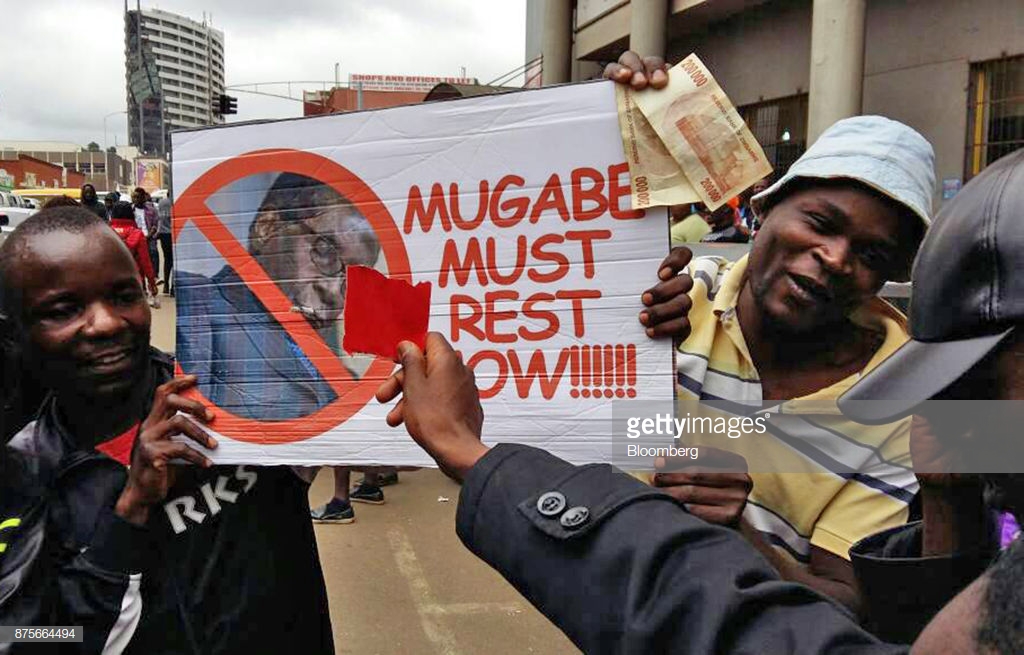 Demonstrators hold a placard reading "Mugabe Must Rest Now!" as they call for the resignation of president Robert Mugabe in Harare, Zimbabwe, on Saturday, Nov. 18, 2017. The ruling partys 10 provincial co-coordinating committees resolved late Friday to oust the 93-year-old president, a decision thats set to be ratified by its central executive as early as this weekend. Source: Bloomberg

The 37 year old Baobab government, led by the Marxist-Leninist Zimbabwe African National Union – Patriotic Front (ZANU-PF), was cut off last year in a deal to allow for a transition of power to Mugabe’s long-time ally, Emmerson Mnangagwa.

The now-resigned President Robert Mugabe was once a true revolutionary, to the extent of naming his own son Nhamodzenyika – translating to “the suffering country”. There’s an adage that, “a good beginning makes for a good end”. But in the context of “Mugabetarianism”, this statement is a fallacy of hasty generalization. Abraham Lincoln once said “all men can stand adversity, but if you want to see a man’s character give him a position” – It’s difficult to find a more appropriate quote to explain Mugabe. The truth is good leaders often don’t make up good leadership.

The former President Mugabe, a Marxist-Leninist, embraced universal social welfare, but the Mugabe-directed Education, Public Health and Social Services departments faced unending challenges, from low productivity to high levels of corruption. Government inability to adequately fund public health services in 2014 left most public hospitals critically understaffed because of frozen public sector employment. In education, nearly all rural public schools were closed. In 2009, according to a report by UNICEF, about 94% of rural Zimbabwe schools were closed. Mugabe’s educational service saw the attenuation of teachers due to poor salaries and a laggard bureaucratic response to problems throughout the Zimbabwean education system. Even though Zimbabweans have the highest literacy rate in Africa, the educational sector’s welfare assistance killed the gene of success.

Mugabe’s poor economic planning  ravaged Zimbabewan industries until they could no longer participate in the international markets, turning what was once known as Africa’s bread basket into one of the poorest countries in the world. Between 1990 and 2000, living standards plummeted. High inflation scared investors and led to one of the worst economic crisis in recent memory. The tragedy is that Zimbabwe’s deposits of rare minerals and other natural resources could have made the citizenry extremely prosperous, had they had the right ideology in governance and trade.

Now that Mugabe is no longer in power, many Zimbabweans have high hopes for the future of their country.  But the end of Mugabe is not the end of poverty in Zimbabwe, nor of the unstable microeconomic indicators of a struggling economy; it is merely the end of “Mugabetarianism”. Now, it is yet unclear whether a new “Mnangagwanism” will emerge.

On the bright side, it seems the new President is trying to open up Zimbabwe’s economy. One of his first major speeches after the election emphasized the idea of renewal, and he has even made overtures to Zimbabweans who lost their farms under Mugabe’s (highly corrupt) policies of land redistribution.

But even though Mnagagwa is credited with turning a new page for Zimbabwe’s industry, and lightening the political climate in Zimbabwe slightly, so far, things do not look all that promising, though this is perhaps to be expected when a man nicknamed “Garwe” – meaning Crocodile in Shona – takes the reigns of power.

Mnagagwa’s electoral victory last month has already been brought to court over allegations of fraud,  and evidence suggests that “the crocodile”  is doing his best to clear any last links to Mugabe from his circle of power. Opposition members have also been targeted, with 23 opposition supporters being charged with inciting electoral violence after incumbent Mnangagwa was announced as the winner. These actions do tend to trigger one’s sense of deja-vus.

As of yet, policy action has been limited – Mnangagwa needed the legitimacy of the election to truly secure his hold on power, and this most recent legal challenge has somewhat delayed that consolidation. Nonetheless, the world will be watching to see if a Mnangagwanism – or perhaps Garwenism, if he lives up to the epithet – does emerge.

And if it does, hopefully this time we won’t be as silent.