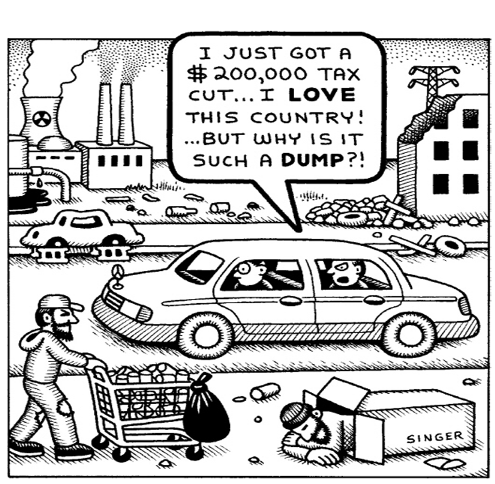 High rates of income inequality in a society has serious, lasting effects of quality of life. It increases violent crime, makes people less healthy, and lowers the average lifespan. It has lasting, traceable effects in first world countries (even slowing down their economic growth). For countries who have methods in place to end hunger, can provide healthcare to their citizens, and shelter, it means tracking a potential solution to a lot of deep-seated issues that seem to lie with individuals.

You can measure quality of life using a variety of tactics. There are a few very specific measures of quality of life you can use to try and look at what sort of life a population lives: life span, amount of violent crime, and economic growth. Life expectancy is the best ways to measure quality of life (for a first world country). It tells you the health factors beyond basic, food, shelter, and health needs, that affect people because of income inequality. However, violent crime and economic growth are sub-factors that help explore the more immediate impacts to individuals.

Income inequality is the biggest contributing factor to violent crime. This has big results when you start looking at increased stress in a society, lower general health, and could contribute to early deaths. Not only do violent crimes negatively impact other individuals in the society, but they also hugely impact the individual. Especially when you start looking at countries with higher rates of violent crime, reform activities in corrections, or the cost of those crimes of society.

While in the US, crime has consistently lowered, which could be contributed everything from rising availability of food and health care to even silly things, like an increased use of essential oils. But, the difference between the states and the correlating crime rate is a great way to look at the relative rates of violent crime vs. income inequality. You can compare the economic inequality between states and correlate them fairly accurately to murder rates. This is especially true if you track it allowing for the over-spill from states to states (obviously, the neighboring states would have some influence).

Economic growth is something we all want. Living in a rich and prosperous society is a lot of fun. It makes finding jobs easier, it means finding your piece of pie to take is a little easier. It means that if you want to try to start a business or better your life, you can at least get a fair try at it. It also means that economic inequality affects all of us, even the super wealthy. Anyone who owns a business, wants the economy to get better, or wants to lead a better life should support economic equality. One way the US could bring up it’s levels of equality is by introducing a better tax code (which currently favors large businesses and the mega-wealthy). It’s an economic strategy that pays off “YUGE” in the long run, and would be incredibly helpful for all participating members of our society.

What You Can Do

At a minimum, you should be voting in your local, state, and national elections. These are where people try to bone you the most. Don’t believe me?

When people’s basic needs are met, your society will still have issues, even with homeless shelters people can still be stressed over foreclosure. However, when everyone is engaged and able to succeed in the society, you are more likely to want to continue performing well. Whether that’s with your own business or just being a performing, amazing member of society trying to live your life without doing terrible violent crimes. It’s a lot easier if you feel like you’re doing something well, like your being successful, and are moving forward. As opposed to the stress of being able to budget around eating, living, and nothing else.

There is a life beyond just survival, and that sort of living is not good for humans. It puts stress on people, and can be very stressful if you get even a little behind. Taking vacations (even staycations), being able to make their homes more comfortable, and making healthcare (and other bills) affordable expenses. Letting a society be successful (all of it) means big results for everyone.

On a plus note, the world is increasingly peaceful and getting closer to economic equality.

There are a variety of reasons that income inequality is rising in certain parts of America. Older, hyper conservative voters that believe in failed economic plans are part of it. Another part is that older people tend to ignore a lot of social needs without realizing that social needs affect our economic success (this could also be phrased as, young people aren’t voting). For example, heroin use is a drain on any society, but the war on marijuana (a drug that can be used to treat heroin addiction) costs taxpayers 44 billion over the past 30 years to keep illegal. The reality is that until people realize that we should work together to get better as a society, live better lives, and push forward, we will only be pushing ourselves back. There are no welfare queens, no one out to get you, and no one who’s trying to nuke your country. Economic inequality in first world countries is what makes people rob, it’s what stresses them to an early grave, and what makes them disengaged from society making it revert back.

Economic inequality is more likely to happen in countries with less social care. The U.S. is a great nation. It’s the premier global superpower, with 65 percent of the budget going to war, and an economy that could crush any small nation-state. It could do a lot. But it lacks health care, and that has a big impact on quality of life. While economic inequality and lifespan are directly tied, there could be an entire universe of factors at play that we can’t quantify as humans.