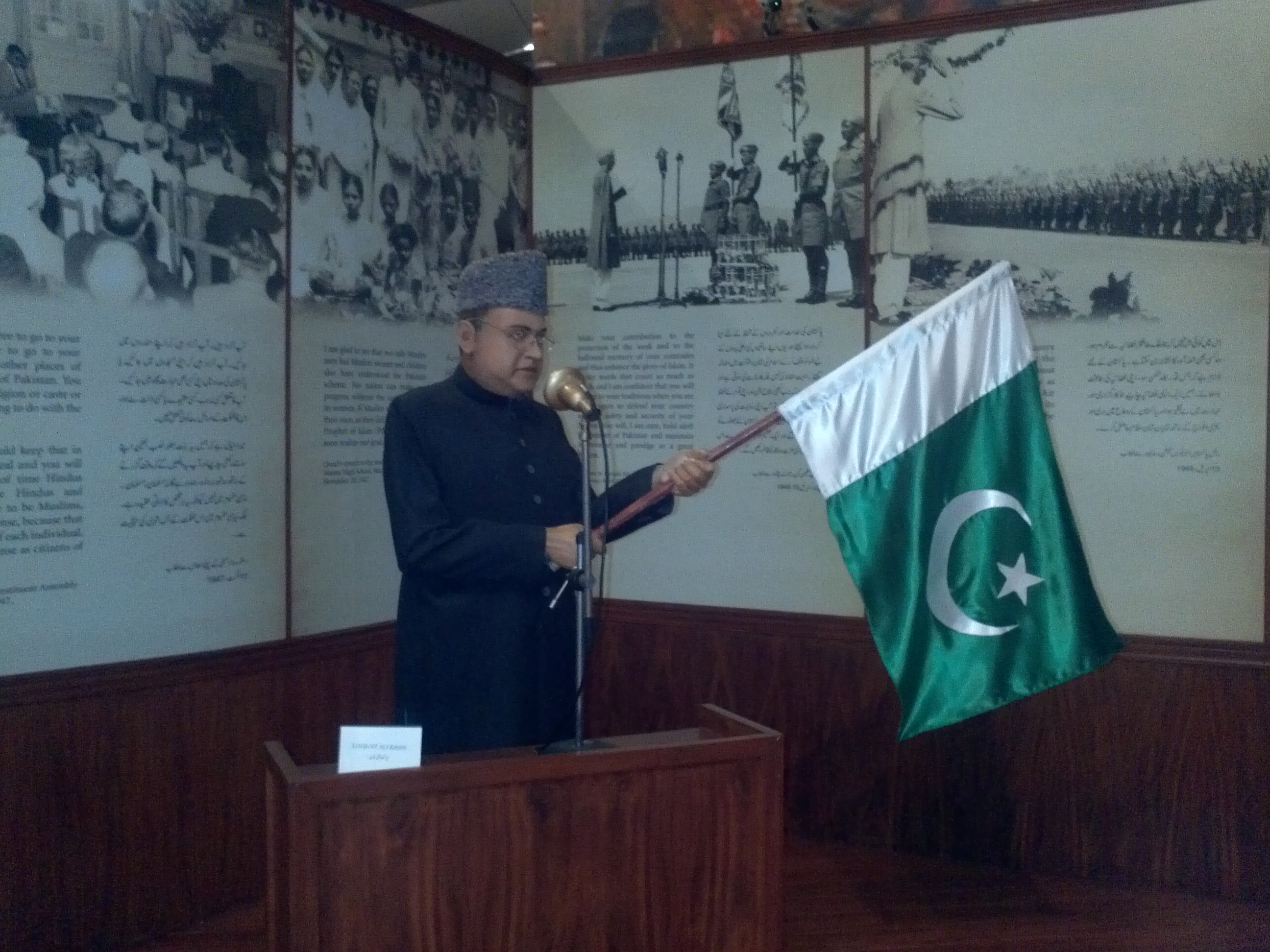 Pakistan's first Prime Minister Liaquat Ali Khan unveiling Pakistan's flag inside the Monument Museum in Islamabad. Notice the white portion in the flag which was embedded just so that no one could deny minorities their rights in Pakistan.

Pakistan was formed as a democratic country, where every religion coexisted peacefully, however, after the demise of its founding fathers, things quickly went south.  In 1958, just one year after the adoption of the first constitution, the then President Iskander Mirza staged a military coup d’état which eventually lead to the rise of Pakistan’s first dictator. Democracy was not restored until 1988 and then, after only a decade, democracy was overthrown yet again by another military dictator. The policies of these dictators lead to the rise of extremism in Pakistan. Most of Pakistan’s terror related problems can be traced back to the eras of military rule. It was during these times that the extremists started to gain sympathies in Pakistan.

The people of Pakistan believed the Taliban to be their Muslim brothers, who were fighting foreign occupation in Afghanistan. After the emergence of terror groups such as the Taliban and Al-Qaeda, extremism became prevalent in Pakistan.

Today, the people of Pakistan are fully aware of the evil that lies with their so called ‘Muslim brothers’. According to the Pew Research Center, just 33% of Pakistanis saw Taliban as hostile in 2008, in 2009 however, just one year later, the percentage had increased massively to 70%. Similarly, in 2008 72% of the Pakistani population was concerned about extremism in the country, the percentage rose to almost 80% in the next year.

It is true that the people of Pakistan were once shackled by the extremist elements, which were prevalent in the country. However, there’s always a breaking point for something, and from what I can see the people of Pakistan have had enough of the bigotry of the Taliban and other extremist elements. In December 2014, the Taliban attacked a military school in Peshawar. The attack was so brutal that even the Afghan Taliban and Al-Qaeda condemned the attack. It resulted in the death of more than 100 people, mostly children. This was the last straw. After this attack, the people, who were once silenced by the fear of getting killed, started showing their power by protesting and calling for a complete scrutiny of government policies regarding extremism.

The civil society of the capital, Islamabad, protested outside the infamous red mosque because they openly justified the acts of the terrorists. Such a move was considered life-threatening in the past.  People believe that now, the Taliban and other extremists cannot be defeated because they’ve solidified their position within the country. I agree with them to some extent, it’s true that they cannot be defeated through war however altering their hateful ideology and mindset can actually put an end to this conflict once and for all, and that’s exactly what the people of Pakistan plan to do. For Pakistan, the concept of liberalism is more than just a political terminology, rather it’s a necessity for survival. In December 2007 Benazir Bhutto, the first female Prime Minister of Pakistan was assassinated. Her assassination caused outrage within the country however it was the 2014 Peshawar school attack which forced Pakistanis to take action. Today, many Pakistanis call for a change in constitution so that it could reflect liberal ideas which in result will help curb extremism.

Moreover, in the last five years Pakistan has taken a more liberal approach due to which the country has witnessed:

To combat extremism in the country the Education Ministry in 2015 said that they will include a speech of Pakistan’s founder Muhammad Ali Jinnah, in which he spoke about religious tolerance and equality, in the national curriculum:

You are free, you are free to go to your temples, you are free to go to your mosques or any other place of worship in this State of Pakistan. You may belong to any religion or cast or creed — that has nothing to do with the business of the State … Now I think we should keep that in front of us as our ideal and you will find that in course of time Hindus would cease to be Hindus and Muslims would cease to be Muslims, not in the religious sense, because that is the personal faith of each individual, but in the political sense as citizens of the State.

Pakistanis value their founder a lot. Because of that, this speech holds great significance in the war against terror. Pakistani liberals are focusing on combating hardcore extremist ideology through persuasion, because you cannot force a person to do something by force. We believe that if we can change the mindset, then we might be able to defeat terrorism. However, there are not many resources available for young liberals considering the fact that being a liberal in Pakistan is full of risk.