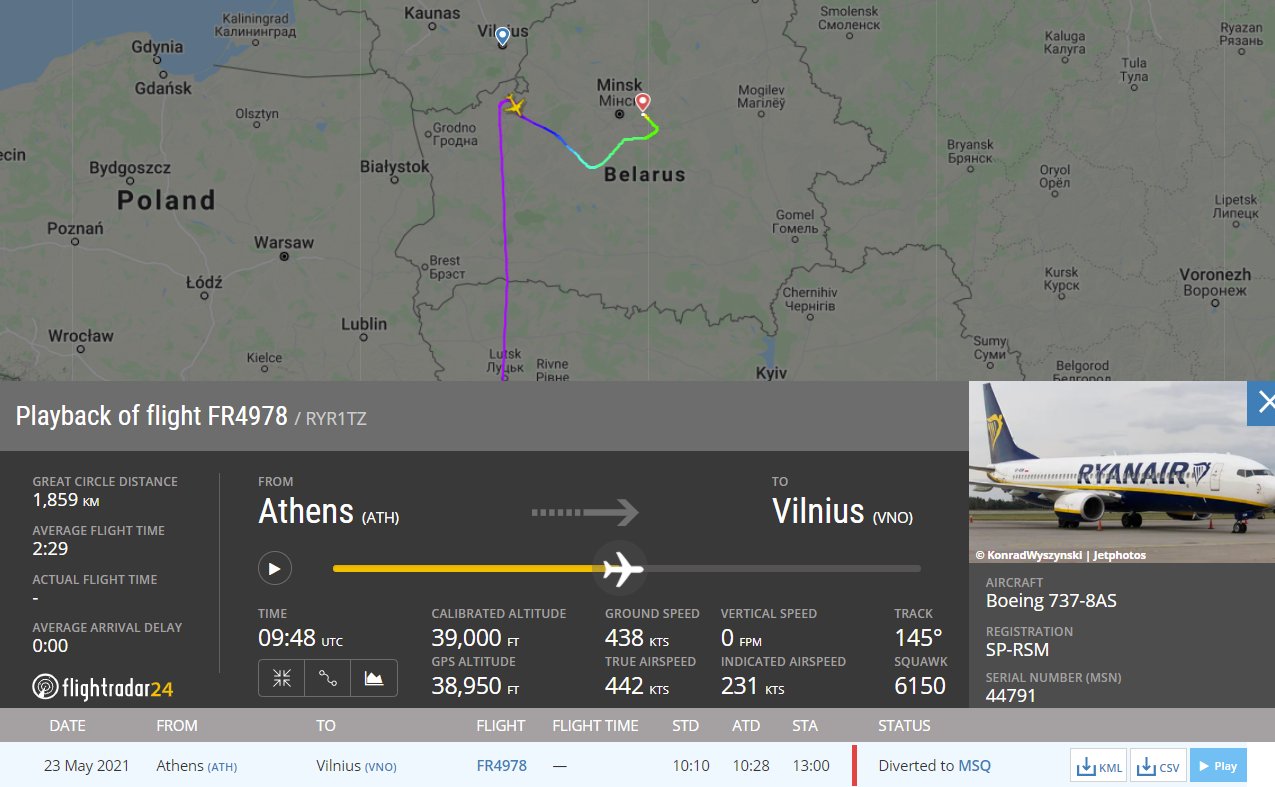 On Sunday evening the Belarusian KGB (yes, they didn’t change that after 1991) hijacked Ryanair flight 4978 en route from Athens to Vilnius. The flight was delayed for several hours and only after that time, we have started to learn the true nature of things. Overall the reactions towards the Belarus authorities have been negativ , which in itself is a positive thing. In addition to Europe, the US has also joined in condemning the act.

According to the Belarusian authorities, the reason for the emergency landing was a suspected bomb on board, which is a pathetic excuse for a few reasons. Firstly, the plane was much closer to the Vilnius airport, just minutes away from Lithuanian airspace, so making a U-turn and flying to Minsk wouldn’t make sense in the case of an emergency. Secondly, the Belarus air force sent MiG fighter jets, fully armed with missiles, to escort the plane down to Minsk. It doesn’t really make sense to send fighter jets carrying bombs to protect a plane that’s allegedly already being threatened by one, right?

At the centre of things there is Raman Protasevich. The 26-year-old journalist and activist was an instrumental player as head of Nexta, a Belarus-based opposition news platform that among other things co-ordinated the series of demonstrations after last year’s presidential election. Since then, Protasvich has stepped down from his position and has lived in Poland in exile. In November 2020, he was designated as a terrorist by the Belarusian government for his involvement in Nexta. This includes exposing the torture of Belarusian protesters in prison. Protasevich’s life is in danger since being labelled a terrorist can land him the death penalty under Belarusian law — and the country actively carries out executions.

So now we must ask, what should be done with the Belarusian government? It’s already been sanctioned by the EU thrice due to questions regarding its so-called presidential election in 2020. The fourth set of sanctions was prepared just two weeks ago.

Lithuania has taken an active role in this. It shelters the Belarusian presidential challenger Sviatlana Tsikhanouskaya and has refused to hand her over to Belarus. The country’s president, Gitanas Nausėda, has already called the hijack ”a state-initiated terrorist act against the international community”. Moreover, the president suggested on his Twitter page that Belarusian airspace should be declared unsafe and that Belarus’s airplanes should be barred from the EU’s airports. Both are very good suggestions because the only Belarusian scheduled airline is Belavia, a state-owned company. Barring Belavia from the EU is also something that the German liberal FDP leader Christian Lindner and Renew Europe group leader Dacian Cioloş brought up.

Economic sanctions of the toughest caliber must be on the table. The EU is the country’s second biggest trade partner, meaning the EU absolutely can make things very uncomfortable to Belarus if it wants to. Then, with the help of the USA, Belarus can be shunned from the international banking sector, which would restrict the flow of foreign currency into the pockets of the government, thus hitting it where it hurts the most: their wallets.

One quick fix that could be applied is to change flight-patterns so that the planes won’t fly over airspace under Minsk’s jurisdiction. Belarus, as any other country, can charge overflight fees from airline companies that fly over their skies. It works like a toll on a highway, and an airline pays if it enters, leaves or flies through a country. Simply rerouting the planes would once again deprive the Belarusian government of millions of euros of foreign currency. Pretty much the same effect can be achieved by barring Belarusian commercial flights from the EU’s airports.

Another option is to go for the dictator’s favourite thing directly: ice hockey. For Lukashenko this has always been pretty much the only way of projecting a softer image (as soft as a dictatorship just can) to the world. He’s also fond of the sport personally. He has already lost the co-host spot of the ice hockey world championship, which was a huge loss. The country is still playing along with other countries, but it’ll be interesting to see if their upcoming opponents would, let’s say, refuse to play due to the hijack.

The international community must tackle this issue and the first step is to call it for what it is: a hijack, not forcibly escorting down a plane” or something like that; no. In a case like this, the language used truly matters and we can’t let this be watered down by the semantics. This hijack has surely brought Belarus back to the attention of the international community — a reminder that not only is there a horrible dictatorship in Europe but also that the so-called presidential election in the country never got resolved, and hundreds of thousands of Belarusian voices have been silenced. We must remember. We must endure. And we must show solidarity.