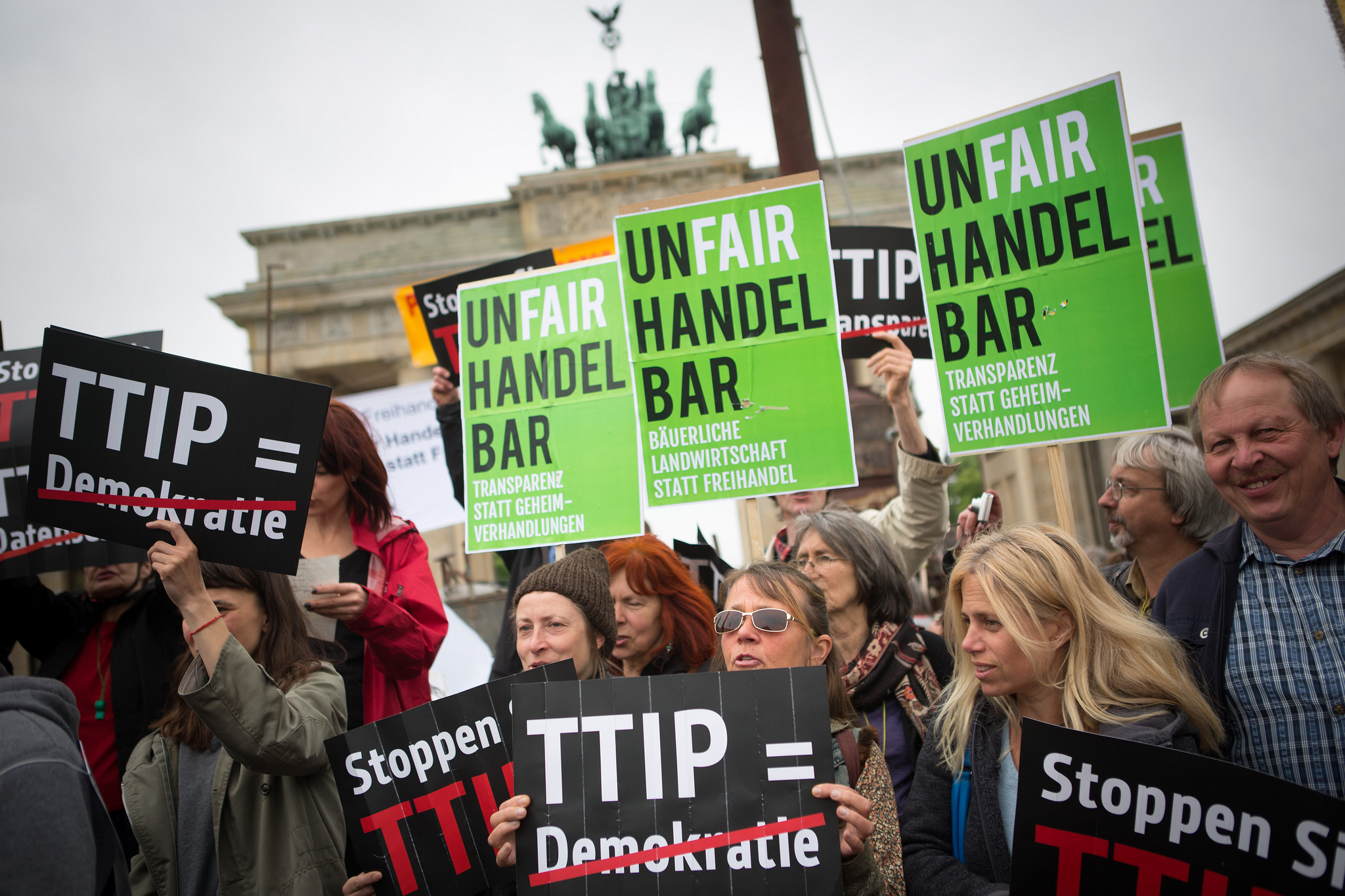 The United States and The European Union are currently negotiating the Transatlantic Trade and Investment Partnership, commonly referred to as TTIP, that aims to create the world’s largest free-trade zone.

The ideas behind TTIP are straight forward, to simplify trade and investment, integrate countries and to strengthen economies. It aims to do so by reducing obstacles to trade (such as tariffs, differences in standards and more) and by providing a framework on how to conduct that trade.
Yet last autumn, hundreds of thousands of people gathered in the streets of Berlin and millions has signed petitions, to call of the negotiations. Trade deals has a tendency to stir up emotions, this one is no exception and as the negotiations intensify so does the protests against them.

The arguments against TTIP range from criticism on the transparency of the negotiations to claims that TTIP would empower multinational corporations at the expense of democracy. The widespread skepticism to free trade can be traced back to the protectionist theory of mercantilism that governed European economic policies for centuries. And still today, this is continuously being reinforced by protectionist politicians and interests that influence public opinion. Understanding this is at the very core of understanding the criticism to TTIP, and understanding that is necessary when debating its benefits. There are legitimate concerns about parts of TTIP but most of the arguments against the deal are misguided, built on misconceptions and ultimately based on emotions rather than facts.

Some of the most common arguments against TTIP are that it would lead to less ambitious environmental standards and that states would be blocked from improving their environmental regulations. These arguments are common on both sides and build on the false assumption that the other side have much lower standards. In reality, most standards and regulations are already quite similar and the objective of TTIP is to harmonize them. Currently, many products have to go through almost identical tests for both the European and US market, which is both costly and takes time. Harmonising current, but also future, standards would be an efficient way to free up resources. Resources that could for example be invested in employing labour or to research more environmentally effective products. Given the size of the combined economies, common standards in the US and the EU would also serve as a benchmark and most probably push India, China, Mexico and others to raise the standards of their products so as to enter the market.

In regards to blocking regulation, opponents often claim that the investor state dispute settlement (ISDS) mechanism, which will be a part of TTIP (and more than 3000 other trade deals across the world) will remove power from governments and that companies will be able to sue states for not making enough profits or for pursuing ambitious environmental policies. Again, this is simply not true.  Opponents of TTIP often exemplify their resistance to ISDS with the cigarette brand Phillip Morris who sued Australia on its attempts to reduce smoking. What they fail to mention however is that this was done using a 25-year old trade deal and, more importantly, that Phillip Morris lost the case.

ISDS is a framework that regulates what rights and obligations states and investors will have towards each other and how to settle disputes. What it boils down to is that investors would have the right to sue states if they are being discriminated against, not if regulations impact on their profits. The EU commission has also been keen on using TTIP to improving ISDS and making it more transparent.  ISDS in this deal won’t set aside democracy, it will enforce the rule of law.

Another popular claim is that TTIP will lead to job losses. This is a claim that falls on the classic misconception that trade would be a zero-sum game where one has to win, one has to lose and the number of jobs are limited. On the contrary, economic theory, historical reality and most economists agrees that free trade goes hand in hand with prosperity and that trade deals tends to positively impact economies, hence the lives of ordinary citizens. And indeed, estimates are that TTIP will increase the economy of Europe by more than 100 billion Euro yearly, roughly the same in The US, and lead to the creation of more than 2 million jobs.

Europe and the US are no longer the uncontested economic leaders they used to be. The aftermath of the financial crisis is still apparent and a sense of discontentment is spreading across both the US and the EU, leading to the rise of populism and even more protectionism. TTIP would be a well needed injection in these economies. Despite their shortcomings, the EU and the US are still the two most influential democratic regions of the world and building bridges between them is also about strengthening the democratic values they are based upon.

It tends to be easier to mobilise people against a common issue than for a common goal and indeed very few have taken to the streets to demonstrate for TTIP. But those who support TTIP need to step up and take the fight. We cannot allow fear and misunderstandings to deter us from creating a free trade zone that would improve the lives of millions of people.

Anders Rehnberg is an internationally active member of Liberal Youth of Sweden, a member of IFLRY’s Free Trade Programme as well as a candidate for IFLRY Vice President. He is currentlystudying to receive a double bachelors in Internation Relations and Economics.