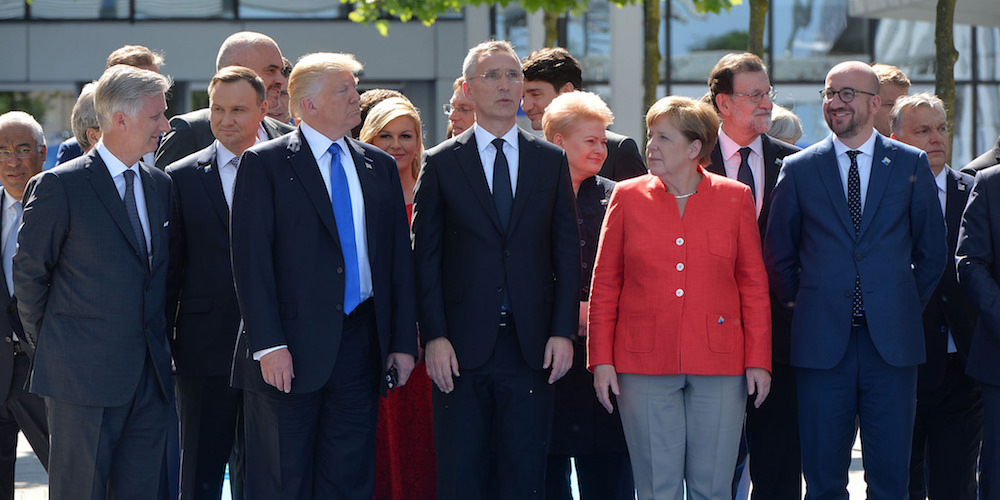 Plus ca change. NATO Sec.Gen Jens Stoltenberg flanked by Merkel and Trump one year ago.

The European-American relationship has seen better days. Over the last weeks, the war of words between Europe and the US has escalated. This raises the question where the transatlantic relationship is heading. Are we heading towards the end of close transatlantic interactions or is this only a temporary crisis?

The rhetoric has worsened. After introducing tariffs on European steel in June, Trump threatened a 20% tariff on European car imports in a tweet last week. Moreover, he recently called NATO as bad as NAFTA. He also pulled out of the G7 communique and lashed out at the other G7 countries. Last but not least, even his bromance with Macron has come to an end after a bad phone call over the trade war and immigration in June. Meanwhile, Trump gets on well with autocrats like Egypt’s Sisi or North Korea’s leader Kim Jong Un, whom he called a great, funny guy. On July 16, he will meet with Russia’s president Putin. European countries are worried that Trump may make promises to Putin which they don’t want to keep.

The tough rhetoric has had consequences. In a recent poll, 82% of Germans said they don’t think the US is a reliable partner. More people thought that Russia was a reliable partner. Politicians are also disillusioned. Last summer, Merkel lashed out at the US by saying that Germany couldn’t completely rely on the US anymore. So, with the transatlantic relationship deteriorating, the question is: How bad could it get?

The answer is: Pretty bad. Trump has said a lot during his campaign and his 18 months as a president. Given that he has fulfilled campaign promises no one thought he would fulfill such as pulling out of the Paris climate deal or pulling out of the Iran deal, we must expect that he is capable of fulfilling his other promises too. Possibly, he will follow up on his promise to rectify America’s trade imbalance with Europe. The trade war with China is already escalating and Trump has shown no intention of backing down. It thus seems likely that he may apply a similar logic to the trade spat with Europe. Also, he has said the EU is only set up to exploit the US and he has offered Macron to leave the EU to get a favorable trade deal with the US. This indicates that he is hostile towards the EU and may try to actively dismantle it. This could give the EU the final blow if the debt crisis resurfaces and if the migrant row escalates. Additionally, he has repeatedly scolded NAFTA and reportedly said that he doesn’t understand why the US is in the WTO. Possibly, he is already framing his narrative to leave both organizations.

Unfortunately, we cannot count on senior figures in the administration to stop him. H.R. McMaster and Rex Tillerson, two prominent senior administration officials who supported the Iran deal, have resigned or were dismissed. Many speculate that James Mattis, one of the last moderates left in the administration, will be next to go. As Trump is becoming more and more confident, he is increasingly following his own gut feeling. Because he doesn’t like to be criticized, he removes all those from senior positions who may disagree with him. Given Trump’s unpredictability, this means everything is possible.

However, all this doesn’t mean the end of the transatlantic relationship. Yes, the international rule-based order will be damaged under Trump. But the Western alliance won’t be dismantled. There are two reasons for this.

Firstly, Europe alone isn’t strong enough to manage the international rule-based system. Most international institutions, for example the WTO, the UN or NATO, are very US-centered. Especially the WTO and NATO traditionally have strong US-leadership. It seems unlikely that European countries, grappled by their own populist and economic challenges, will have the capacity to rewire the international system. Also, Europe doesn’t have the military might to be the center of global security.

Secondly, there is no alternative to the US. The US under Trump is a terrible partner, but China and Russia are even worse. Russia is actively trying to destabilize European countries by meddling in their elections. China is relentlessly pushing its own interests by spying on Western companies which operate in China. Also, its 1984-like Orwellian internet censorship and social credit system is hardly in line with Western values.

Ultimately, all Europe can hope for is a better next president and no second four-year term for Trump. A new president, who will probably be a Democrat, may be more moderate and is likely to re-engage with Europe. Trump is at the very extreme of the spectrum and even most Republicans are less hawkish than him, not even to mention the Democrats. It is probably that we will be able to revive the transatlantic relationship and rebuild the rule-based order in two and a half years or in six years the latest.

Nevertheless, this isn’t guaranteed. If Trump does too much damage, the rule-based order of international treaties and organizations may be too disrupted to rebuild. And if another Republican of the same caliber as Trump and the same distaste of Europe comes into office, the future looks grim indeed. In this case, the transatlantic relationship and with it the rule-based order may go into total disrepair. We would face a multipolar, uncertain future where global conflicts wouldn’t be unthinkable.