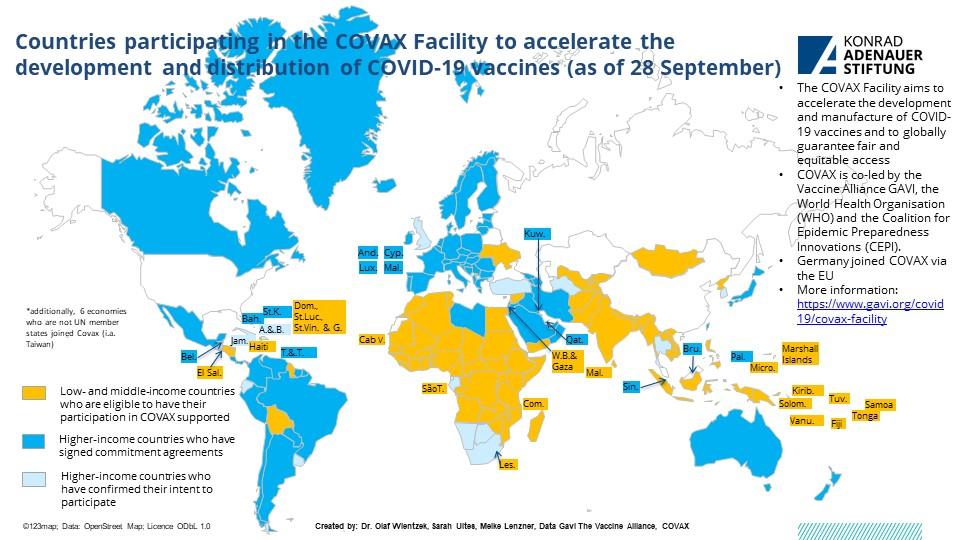 For many, the arrival of 2021 meant hope: COVID-19 vaccines were finally a reality. People assumed that societies could go back to normal. But the new year brought with it new challenges. As we know, the world did not respond well to the initial outbreak of COVID-19, which led to the loss of thousands of lives worldwide. Now, as vaccines arrive, it’s time to heal the wounds of the past. However humanity once again is making the same mistakes. The way the vaccine is being distributed has been declared unfair by many, as the world once again finds itself divided while responding to the challenge at hand.

Early on, wealthy countries placed advance orders with vaccine manufacturers. This meant that almost all of the world’s production capacity was bought up by them before production had even started. Moreover, many countries ordered more doses than they needed. For example, Canada ordered enough vaccines to vaccinate its entire population at least 5 times over. And although Canadian Prime Minister Justin Trudeau has promised to donate the excess vaccines to poorer countries, this will make the process even slower than it already is.

Covid vaccinations are a race against time. So far, we have observed several new coronavirus variants from Brazil to South Africa to the UK. This signifies that the virus is mutating rapidly, and nobody can tell how long we have until a variant with the potential to escape immunity provided by the vaccines will arise. Therefore, all countries need to start vaccinations as soon as possible, to curb the threat of new variants. Otherwise, even if a country vaccinates all of its population, a mutant variant that arises in another country could potentially undo all the hard work.

As the numbers go, 96% of the Pfizer-BioNtech vaccine and all of the Moderna vaccine have been reserved by rich countries. On the other hand, AstraZeneca has promised to provide at least 64% of its supply to aid vaccinations in poorer countries.

What role is the WHO playing to fix this issue?

The WHO has created the COVAX alliance, which is a joint initiative by the World Health Organization (WHO), Global Alliance for Vaccines and Immunization (GAVI), Coalition for Epidemic Preparedness Innovation (CEPI), and UNICEF. The COVAX alliance is composed of 165 countries and is responsible for the donation/delivery of the COVID-19 vaccine to low-income countries, that are at a disadvantage during the vaccine procurement race. So far COVAX mostly relies on the AstraZeneca vaccine since Pfizer and Moderna vaccines have already been reserved.

Moreover, the WHO has also repeatedly called for fair distribution by quoting the slogan:

“No one is safe until everyone is”

The role of other advocacy groups:
The People’s Vaccine Alliance is a group of organizations and activists that are advocating for fairness in the distribution of vaccines. Other than that, they are also calling for vaccine manufacturers to share the science behind their vaccines for the global good. But questions arise: how will the companies make vaccines and other treatments given that they get no profit in return? According to the People’s Vaccine Coalition:

“We are not suggesting that pharmaceutical companies shouldn’t cover their costs or make a reasonable profit in normal circumstances. However, given that COVID-19 is a pandemic and most of the research and development (R&D) costs are financed by public money, it would be completely unacceptable for companies to charge the kinds of high prices we have seen for other medicines and vaccines”

Other vaccines providing hope:
Russia’s Sputnik V and Chinese vaccines such as Sinopharm, Cansino Bio, etc. are somewhat filling the gap in many countries which were unable to secure a supply of other vaccines. China is donating a large number of doses to at least 53 countries such as Pakistan, Lebanon, Indonesia, the Philippines, etc. Although some might call it a political stunt or vaccine diplomacy, it is undeniable that this is helping the countries involved. China expects to produce 1 billion doses of its Sinopharm vaccine in 2021 and Sinopharm is just one of the 4 vaccines that China is producing. In the near future China expects that its vaccines will be able to cover at least 40% of the global population. Similarly, India has so far donated its indigenous vaccines called Covishield and Covaxin to neighboring countries such as Nepal, Myanmar, and Bangladesh. India has big role when it comes to vaccine production since, India hosts the Serum Institute of India which is the largest vaccine producing institute in the world. India therefore has a big responsibility on its shoulders during the ongoing pandemic. It has already donated around 58 million doses, which is expected to benefit at least 71 countries including the ones mentioned above.  On the other hand, countries such as Iran have so far focused on creating their own vaccine despite being one of the first countries to have a COVID outbreak. Although the recipient countries have termed these donations ‘generous’ the problem remains that it might not be enough for these countries to create a solid defence against the virus.

What’s should we expect down the road:
Looking at the situation optimistically, we should hope to see a larger range of vaccines in the future as other companies have begun testing their shots. The Johnsons & Johnsons Vaccine although new to the competition is already easing the pressure on Moderna and Pfizer in the US. Moreover, countries are scrambling to mass-produce already approved vaccines in order to meet demands.

But as I mentioned above, the issue is that viral mutations are unpredictable. We do not know when and where they will arise, which is why the equal distribution of vaccines in a timely manner is so crucial. Not only so that all the countries can vaccinate their populations, but also so we can lessen the chances of a new mutation arising as cases go down globally.