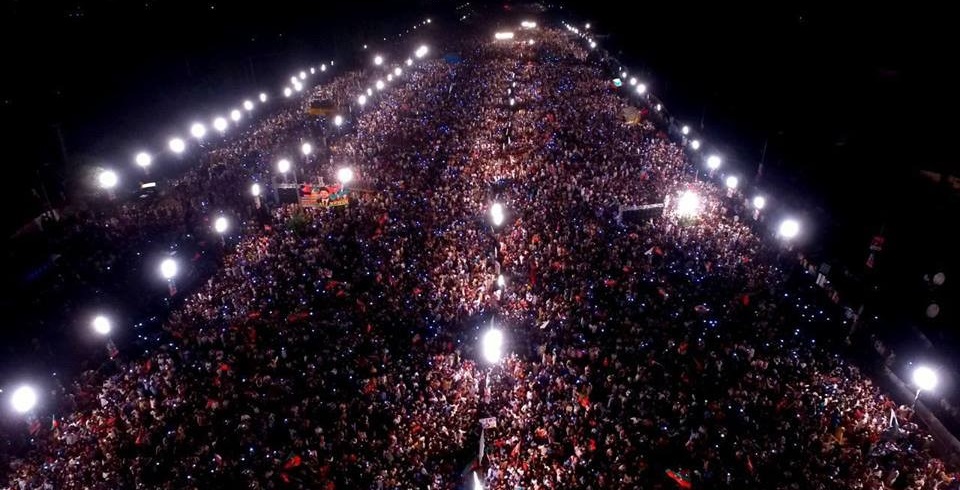 A rally in Islamabad, held by the opposition party Pakistan Tehreek-e-insaaf, to demand that the former PM's financial records be investigated.

In 2015, the Panama Papers revelation came as a shock to the whole world. The leaked documents revealed the information about the offshore financial assets and companies of politicians, celebrities and government officials everywhere.

The revelations triggered mass protests against governments, and lead to the downfall of the Icelandic Prime Minister Sigmundur Davio Gunnlaugsson. It’s been two years since the Panama Papers were made public and countries like Pakistan are still feeling its waves.

In 2015, the former Pakistani PM Nawaz Sharif’s sons and daughter were also named in the Panama Papers. However they denied any wrong doings. Later that year, the opposition party Pakistan Tehreek-e-insaaf (PTI) led by cricketer turned politician Imran Khan started a mass protests across the capital Islamabad; they demanded that all of the Prime Minister’s financial records should be investigated.

Due to mounting pressure the Prime Minister created an independent committee to probe the allegations made against him. The PM promised that

”if the commite proves me guilty, I will go home the next moment”.

In August 2016, the opposition brought a charges against the against the PM in the Supreme Court.  There was more pressure on the PM than the opposition, since Nawaz Sharif had to prove himself not guilty to the allegations made against him and even a slight slip of the tongue could destroy his case. The Court took its time and after an year of pondering and researching some of the judges handeling  the case decided to create a Joint Investigation Team (JIT) to further investigate the Prime Minister and his family’s assets. The court gave the JIT 90 days to submit a report. The JIT was composed of several retired military officials. According to liberal analysts this made things a bit shady, however the investigation was transparent enough to say that there wasn’t much involvement from the military.

Perhaps the best part of the investigation –  the Calibiri font scandal emerged when the daughter of PM Nawaz presented documents and financial statements from the year 2006. The odd thing about those documents was that they were written in a now commonly used font called ‘Calibiri’, even though the Calibiri font wasn’t introduced until 2007. This raised the suspicion  that these documents might be forged. This is when things really stated to go downhill for the PM and his family.

With the PM gone the opposition party celebrated by holding rallies across the country. The opposition leader Imran Khan termed the court decision ‘historic’ for Pakistan.

However some feared that the vacuum created by the resignation of the PM could make a military takeover possible.  Pakistani democracy is very young and unstable at times. In the past, military dictators have used political and democratic instability to their advantage.

How does this affect the world?

Whenever we see loophole in the democratic system of Pakistan there’s always a chance that a third power might take over. The stability of Pakistan is important for the stability of the whole region. Faults in the democratic system could ignite an internal conflict which could possibly spill over Pakistan’s borders. Since Pakistan has a massive military, nuclear weapons and several extremist/militant groups it its extremely important to keep Pakistan stable. Failure to do so could be catastrophic.

Nawaz Sharif has been termed as the unluckiest politician by several analysts. Nawaz has been the PM of Paksitan three times, however not once could he complete his tenure.

He was deposed in 1999 in a coup d’etat. Before that, in 1993, Nawaz was forced to resign because of his deteriorating relations with the president.

Nawaz had relatively good relations with the PM Modi of India Pm Modi even wished Nawaz on his birthday.  The Indian government worried about the future of Pakistan-India relations.
According to Jyoti Malhotra, an analyst on NDTV of India,

“the Supreme court of Pakistan might’ve overdid it”

Many Indian politicians and journalists demanded that those Indians that have been named in the Panama Papers should be investigated just like Nawaz in Pakistan.

Currently there’s an interim PM in place however, Shahid Khaqan Abbasi the new Prime Minister of Pakistan has also been accused of corruption and cases against him are pending. The PM has initiated a rally and is claiming that removing him from office this way has weakened democracy, “I had been elected by the votes of millions of people so how can 5 people send me packing?”.

The Panama Papers has given politicians around the world a lesson that in the age of technology everything is transparent.