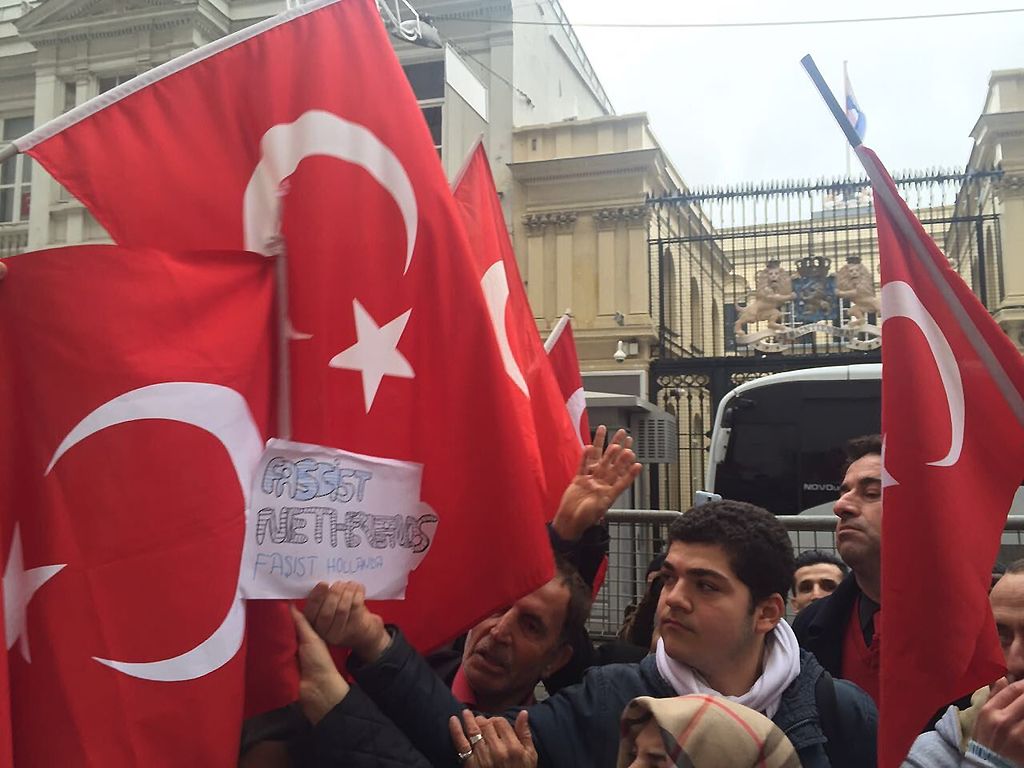 Turkish people protesting in the Netherlands

With the upcoming referendum on the introduction of a presidential system, tensions are running high in Turkey – as they have been for the past three and a half years. In order to explain the current situation, it is necessary to summarize the situation in Turkey after the attempted coup.

With a state of emergency declared after the failed coup attempt on 15th of July 2016, Erdogan has been openly ruling Turkey as its one and only leader. During this time,  decrees have been issued: a lot of them. Just in the two weeks after the coup attempt, 66,768 civil servants lost their jobs. That number  has kept growing.

The military’s system of education has been changed, again by decree. A new university was established: the University of National Defense. Not through an act of parliament, but by Erdogan’s decree. So again, once Turkey goes back to “normal”, this whole project should be shut down. But how? A military academy can only function properly if it is running for at least a few years, if not decades. It doesn’t look like a smart idea to build something, only to watch it become invalid after the state of emergency is lifted. It is also obviously not Erdogan’s plan. The presidency system he has in mind will also legitimize whatever he has done during the state of emergency.

The Nationalist Movement Party and the Justice and Development Party (Erdogan’s party) are campaigning in favor of the Presidency system. The problem with the Nationalist Movement Party is, their leader and voters disagree. Their leader, Devlet Bahceli, is only leader of the party because Erdogan prevented the Nationalist Movement Party’s last conference. As he is the only candidate who wants the presidency system, Erdogan made sure Devlet Bahceli remained leader of the party. Other candidates are campaigning for a no. The Nationalist Party (CHP) looks like it is divided, and it looks like their votes are going to be decisive for the final result. The Kurds look like they are going to say no in huge numbers, as for the last two years they have been living in cities where the military is constantly operating without achieving much.

The pressure on no-voters is huge. Erdogan and the other members of the cabinet keep saying that voting against the presidency system is nothing but helping terrorism. They keep reminding that the HDP, the pro-Kurdish party that has close ties with the terrorist group PKK, is also campaigning for a no. Constantly, people are being reminded by Erdogan that voting no is almost the same as treason. But this has kind of a positive effect on no-voters, because with every single thing that Erdogan says about voting no or about the people who vote no, people see that he gets more desperate. Erdogan himself stated that they were having trouble showing and teaching people about the presidency system, which is a clear sign that their polls are not good at the moment.

Plus, there are so many examples of people losing their jobs or being detained for openly saying no. Irfan Degirmenci, a speaker in a morning news program on TV, was fired because he clearly stated that he was voting no. Students who put propaganda posters on the walls got detained. There are so many examples like this that it is hard to keep track on them.

The diplomatic “incident” a few weeks ago with the Netherlands can be read as propaganda. The story of “Turks, who have always been disliked and faced racism in Europe are now gaining power, that is why European countries are now literally crusading against Erdogan” seems effective. Anyone who has been interested in and working on the referendum always stated that “if nothing  unusual happens”, people will say no to the presidential system. What happened with Netherlands is the extraordinary thing people have been talking about. It put strength in Erdogan’s “anti-west” position. It awakened nationalist feelings. These almost always work for you in a Turkish election.

As a no-voter, I still strongly believe that Erdogan will lose in this referendum. Erdogan’s constant statements about no-voters helping terrorism puts them in a morally higher position. Arguing about the substance of the new constitution, and what it would actually bring is not necessary. No-voters have already won that argument. Just as a small example: it is claimed that with the new constitution, the executive branch will have more power. As there is going to be a president and his cabinet, Turkey will no longer suffer from coalitions that are incapable of making decisions fast. However, this is already secured in the current constitution, by the stupidly high election threshold (the minimum share of the votes that parties have to obtain to be allowed to enter parliament) of 10% percent.  If a new presidential system will ensure that the government will always going to be from one party, and thus a stable one, then why not remove the threshold, or reduce it substantially, say to 3%? No. Because if the threshold is removed or goes down to about %3 percent, it is possible for a centre-right party to emerge and steal voters from Erdogan – even to win against him.

No-voters hold the moral high ground. They weren’t allowed to choose their political leader. They aren’t allowed to say no out loud. They have substantial arguments against the proposal. And more importantly, Erdogan’s constant speeches about the no-voters only make them feel angry. It gives them the motivation to say no, which has always been lacking in the Turkish opposition. And this time, voters against Erdogan really believe that they can make Erdogan fail in an election/referendum for the first time in his life.

Whatever the result may be, Erdogan will not give up his power easily. There are concerns of what will happen if the no votes win. Will Erdogan go for a quick early election to regain power? Will there be claims of a rigged election from Erdogan if he loses? As we have never experienced Erdogan losing before, it is hard to tell his next move.

I believe that if the no votes win, it is not going to be a direct and instant victory for Turkey, but it will be a start. Once Erdogan loses, he will not be looked upon like he was before. He will lose the identity of being “the anti-west warrior who wins against them.” He will not be a winner anymore, which is the core aspect of his image that he – consciously or unconsciously – used to justify building his tyranny. His voters will look at him in a different way. For the last 3 years, the Turkish economy hasn’t been looking good. Many people have been kicked out of their jobs. And almost all of these acts were legitimized as necessary because Turkey was “at war” with USA/Russia/Europe/Assad/PKK/ISIS and many other terrorist groups, even legitimate opposition parties. If Erdogan loses in this referendum, I believe, his supporters won’t be taking his side that eagerly in this so-called war that he is losing.