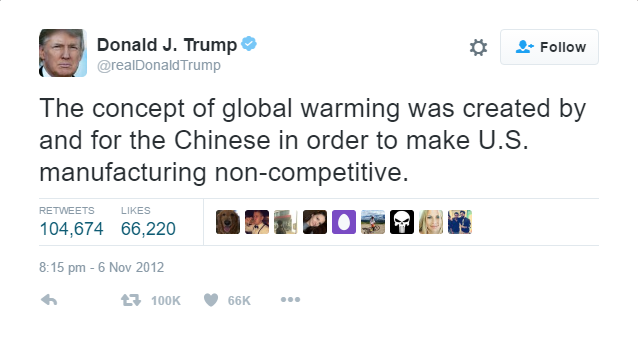 Dorien Lugt (Netherlands) and Jonas Hall-Andersen (Denmark) were on IFLRY’s delegation to the UN Climate Change Conference (COP22) in Marrakech this year. Besides this article on the impact of the US presidential elections, they wrote about their general impressions, on the topics of negotiations during the conference and on Germany’s climate roadmap 2050.

It was a strange experience to continue attending COP22 in Marrakech as usual, when Trump got elected. The conference went on, as if people had decided to not let his victory distract them from their fight against climate change. But even though it is clear that the election of Donald Trump was not good news for climate, the question is: how bad is it really?

‘Cancelling’ the Paris Agreement, as he stated he would do, is not a likely option. The agreement of last year’s climate change conference has entered into force on November 4, and the USA has already ratified it. The US election was one of the reasons for the international community to rush ratification of the agreement, for which ratification by at least 55 countries, responsible for at least 55% of the emissions was needed. Any party can retract from the Paris Agreement only after three years have passed and this process takes at least a year, bringing it to a full presidential period in total. Easier and more likely is that Trump will just ignore the agreement and not make any efforts to meet the commitments the USA made. Let’s have a look at these commitments.

The US commitments to the Paris Agreement, can be divided into two parts. Of course, it includes the reduction of emissions at home.  By ratifying the Paris Agreement, the USA promised to reduce emissions with at least 26% from 2005 levels by 2025. This is a significant share of the intended global emission reductions, which are at this moment not even sufficient to avoid temperatures to rise more than 2 degrees. The other important part of US commitments, is money for foreign aid. Developed nations promised to mobilize 100 billion USD by 2020 to help developing nations with climate change mitigation and adaptation. At this moment, in total 10.3 billion USD has been pledged, of which 3 billion USD is coming from the USA. Even if Trump would not withdraw the US’s promise, it is almost impossible that he will propose a similarly high share of the rest of the 100 billion that still has to be raised.

It is not likely that Trump will dismantle Obama’s legacy. Many of Obama’s policies on national and state level have already been put into force. Undoing regulations would take processes of years and potential court challenges in some cases. Trump can slow down new initiatives but cancelling current regulations takes some effort. More likely is that Trump will reduce the budget of the Environmental Protection Agency. This agency ensures that environmental regulations are adhered to and provides grants for environmental projects. Trump has stated that we don’t really need this agency, so let’s see what he will do with it.

On an international level the effect of Trump remains to be seen. This is the last COP without Trump in power for the next four years. So far this election result does not seem to discourage other countries; China re-confirmed its commitment to the Paris Agreement directly after the elections and might even take this opportunity to take a lead-role in climate change mitigation. Trump’s election might encourage delegations to increase ambitions during this COP, before Trump steps in next year. How bad Trump’s attitude will be in future negotiations is another uncertainty. The question is how far he can go before the world will eventually turn its back on him.

The election of Donald Trump does not mean the end of the world. It will most likely slow down the world’s efforts on climate change mitigation and adaptation, which is alarming. But agreements and actions so far, though positive, are still not far ranging enough anyway. If all countries realize their current nationally determined contributions, the earth will warm up 2.8 degrees by 2050 with dramatic consequences for many people in the world. Donald Trump’s election should be seen as just another reason to work harder. We need to convince our governments and the people around us to take actions against climate change. We can turn the tide, even with Donald Trump in power, but it will require huge dedication from each of us.