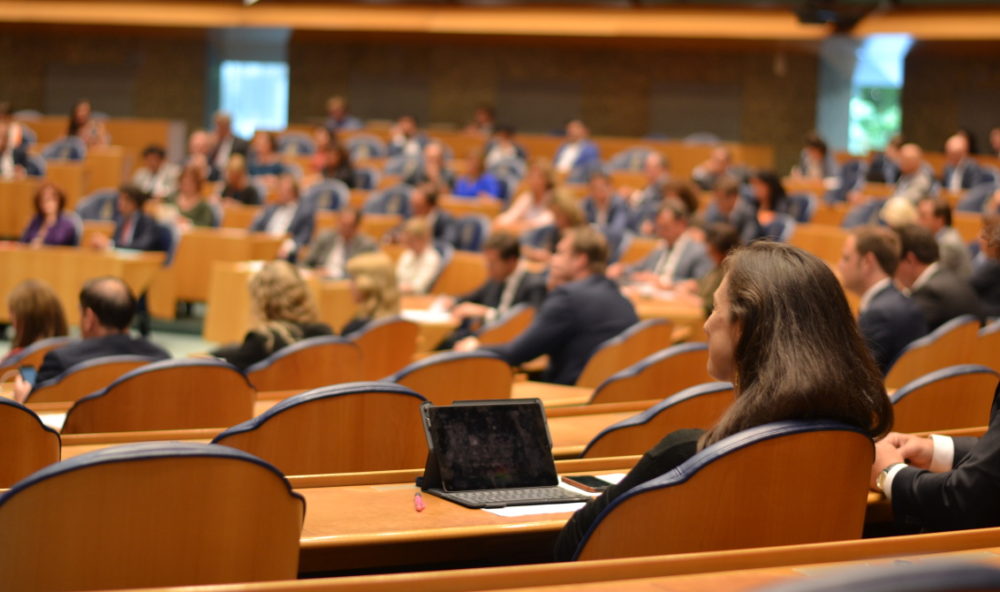 The Dutch Parliament during the debate on the UN Migration Pact

Until a few weeks ago, nobody was talking about the ‘Global Compact for Safe, Orderly and Regular Migration’; a relatively unknown, non-binding UN document on international cooperation in the field of migration. In the last few weeks however, one state after another raised concerns or withdrew from the compact. Now it has become the centre of domestic political upheaval in many countries, focused on some of the most flammable themes of our times: immigration, state sovereignty and identity. The Netherlands joined the group of hesitant states last week, when Parliament decided to hold a 7-hour long debate on the compact in the week preceding its adoption. Part of the increasing scepticism is the inability of governments to provide clarity on the legal nature and the possible implications of the agreement. States should however not shy away from the compact and use it as a crucial opportunity to counterbalance the toxic narrative – present in so many countries – that migration is a threat. Only by working together can states manage to effectively control migration and reap its benefits to the fullest.

The origins of the Compact

The idea for the compact was born out of the so-called European ‘refugee crisis’ of 2015, triggered by the Syrian civil war. More than a million migrants and refugees crossed into Europe in 2015 creating division within the EU and worries about security. Following a UN General Assembly Summit in September 2016, the New York Declaration for Refugees and Migrants was adopted. This included the decision to work on two compacts: one on refugees and one on migration. The Global Compact on Refugees (GCR) is led by UNHCR and relevant stakeholders, while the preparation of the Global Compact on Migration (GCM) is a state-driven process. The final text is the result of six rounds of intergovernmental negotiations this year and is to be formally adopted at the Intergovernmental Conference in Morocco from 10-11 December 2018.

The purpose of the GCM is to strengthen international cooperation in the field: there is no question that this is needed and much overdue. Cooperation in the field of migration has long been sidelined as too difficult. While there is already a specific legal regime in place covering the rights of refugees, namely the 1951 Geneva Convention, to which 142 states are party, no such regime exists in the area of migration. The Global Compact on Migration reflects the agreement that states cannot deal with migration alone. Ever since the US government denounced its participation in the GCM, the EU is one of the most important regional actors of the global North involved in the process.

The compact does not create new rights and obligations. In the preamble of the document it is stated that it rests on existing international human rights instruments, such as the Universal Declaration on Human Rights and the International Covenants on Civil and Political Rights and Economic Social and Cultural Rights. The overarching message is that the GCM itself is not a legally binding framework, even if the text makes multiple references to law. Countries such as Austria, Hungary and the United States have stated that the Compact is a threat to national sovereignty; however the development of the GCM was only possible because all states agreed it would not impose legal obligations. The text specifically includes ‘the sovereign right of states to determine their national migration policy and their prerogative to govern migration within their jurisdiction in accordance with international law’. The text calls for more policy coordination based on political declarations and follow-up measures. The non-legally binding nature is not unintentional: it allows for much flexibility in the actual implementation and monitoring and follow-up measures.

The GCM consists of 23 objectives to be achieved and it mainly ensures that migrants are treated in a humane and dignified manner, in line with human rights standards. States for example need to provide information on possible ways of legal migration, by issuing necessary documentation, facilitating mutual recognition of qualifications and skills and by cooperating in the return and readmission of their nationals. Removing migrants without the legal right to remain in the territory is one of the most clear examples where cooperation is crucial: currently repatriation is slow and often hostile because countries of origin do not cooperate. The compact addresses the complementary responsibilities of countries of origin and destination to facilitate safe and dignified return and reintegration upon return. Another important topic is the detention of migrants: the GCM encourages states to provide alternatives and urges that detention should not be used as a tool to deter migrants. Some objectives have been found objectionable by withdrawing states: for example the objective to provide access to basic services for migrants, or the objective to enhance availability of pathways for regular migration. The GCM also aims at reducing the negative impacts of irregular migration through more international cooperation on regular migration.The lack of regular channels for migration now often leads to people attempting irregular and dangerous paths.

That the text is not legally binding does not mean it is devoid of any effect, especially for countries in the global South. Within the EU there are many provisions of the EU Charter for Fundamental Rights and the European Convention on Human Rights that provide protection for people on the territory of states regardless of their status; including the prohibition of torture, the right to liberty, access to basic services and respect for private and family life. Migrants can directly rely on those binding norms before domestic judges. In the global South however, no such protection is available. The compact therefore undoubtedly requires more work from less developed countries, as most EU states have already developed policies to achieve the same objectives. The compact is therefore a crucial step in developing migration policies in countries actually hosting the majority of migrants. One would therefore expect that EU governments, already legally bound by other agreements, would not make such a big deal of it. It has become obvious however that the past years the rise of populism, nationalism and right-wing extremism has had a devastating effect on migrants and refugees who have become victims of racism and xenophobia. Restrictive immigration policies adopted by the majority of European states have led to fundamental rights violations and challenges to the rule of law and human rights.

States should vote in favour of the compact, because it is a crucial opportunity to confirm their respect for human rights and to move beyond the current ad-hoc crisis management of migration. It is time for states to acknowledge that migration is a crucial part of today’s globalised world and that planned migration policies based on cooperation and global responsibility sharing is in the interest of all. It is obvious that no single state or region is capable of responding to the challenges and opportunities that migration brings alone.

If you look at the countries that do not want to join, such as the United States, Hungary, and Austria, these are all governments with a hostile stance on the rule of law and human rights. The question governments should ask themselves is whether they want to be belong to that group or whether they speak out against them.

Daphnie Ploegstra works as a Policy Officer at the Dutch Council for Refugees, an independent human rights organisation representing and defending the rights and interests of asylum seekers and refugees. She is a senior trainer within IFLRY’s Pool of Trainers and was IFLRY’s Human Rights Programme Manager between 2016-2017. She is active for the Jonge Democraten and D66 in the Netherlands and lives in Rotterdam. The views expressed in this article are Daphnie’s own.