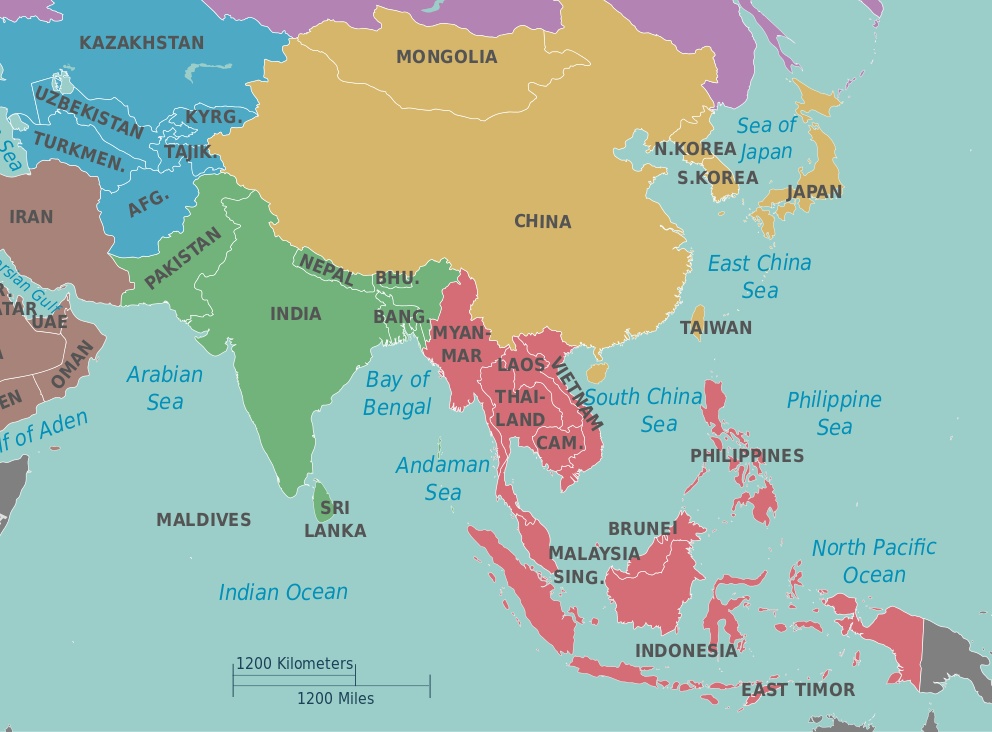 In our previous articles, we at Libel have presented top ten lists of different regions around the world, such as Africa and Latin America. Now it’s Asia’s turn. The biggest continent by both landmass and population is home to various groups of people and thus many ways of governing a state. So, here are the top 10 most liberal countries of Asia. The statistics come from Democracy Index, which is powered by the Economist Intelligence Unit. As a disclaimer, Middle East and Oceania are excluded as they are traditionally grouped into other regions than Asia. Also worth mentioning is that none of the countries listed here are considered a full democracy according to The Economist.

In the Democratic Index 2019, the Republic of Korea scored 8.00 points, making it the most democratic country in Asia (global ranking 23rd). In the World Press Freedom Index 2020, South Korea stands on place 42 (scoring 23.70).

The liberals in the Republic of Korea are quite well represented, since the local Democratic Party holds the majority of the seats (176 of 300) in the National Assembly. The party is classified as centrist and social-liberal. Its former chairperson Moon Jae-in is also the incumbent president of South Korea. Reporters without Borders considers Moon’s election in 2017 as a change for the better.

Japan comes just behind South Korea, having 7.99 points and being the 24th most democratic country in the world. The biggest party at the moment in the Japanese National Diet is called Liberal Democratic Party. Although economically liberal, the party appeals mainly to the conservative and nationalist voters. The country’s main opposition party, the Constitutional Democratic Party, is an observer member in the Council of Asian Liberals and Democrats (CALD).

The country’s Press Freedom Index is 28.86, putting Japan in 66th place globally. This is mainly due to the country’s longstanding mistrust towards foreign journalists and freelancers. Covering subjects such as the Fukushima nuclear disaster and US military presence on Okinawa are labeled as anti-patriotic.

Of all the entries on this list, as well as on the Democratic Index, Taiwan is the highest scoring nation that isn’t a full UN member state. Taiwan got at total of 7.73 points, so it’s the 31st most democratic country in the world. The Democratic Progressive Party, full member of Liberal International, has won the parliamentary and presidential elections in both 2016 and 2020.

Taiwan’s Press Freedom Index is 23.76, putting it in 43rd place globally. Media is quite polarized based on party politics. The situation of the LGBT rights is very good: for years, Taiwan has hosted Asia’s largest pride marches and became the first country on the continent to legalize same-sex marriage.

Timor-Leste, or East Timor, is among the youngest countries in the world, becoming independent in 2002. The country is the world’s 41st most democratic, with 7.19 points. Considering all the hardships the country has been through, this was a surprise to me.

The country’s Press Freedom Index is 29.98, with a global ranking of 78. Timor-Leste has made a significant jump up (+6) in the ranking compared to 2019, although some draconian measures have been taken to encourage self-censorship among journalists.

Malaysia’s ranking on the Democratic Index is 43, with a total score of 7.16 points. Two parties, Gerakan Rakyat Malaysia Party and Parti Keadilan Rakyat, are observer members of Liberal International. Both are represented in the bicameral parliament.

Also, Malaysia’s ranking on the Press Freedom Index has improved considerably: with 33.12 points Malaysia lands on the 101st place (+22 from last year). One major contributor to this is the fact that the ruling Najib Razak lost the election in 2018 and hence many journalists have been able to work without fear.

India was unfortunately also the country that saw a significant change in its ranking: according to The Economic Times, India fell 10 places (to the 51st position) in 2020. Its current score is 6.90 points. A central reason for this was the fact that civil liberties are under threat in India and the nationalist Bharatiya Janata Party (IDU) holds the majority of the seats in India’s lower house (Lok sabha). For a country that is styled as the biggest democracy on Earth, this is truly an alarming change for the worse.

Ranking at 142nd place with 45.33 points on the Press Freedom Index, India’s situation is worrying. Just like in Japan, covering subjects that are touchy for the ruling party, and its hindutva ideology, are labeled unpatriotic and discarded. Centrist liberalism is almost non-existing on the federal level in Indian politics.

The Philippines rank as the 54th most democratic country, with a score of 6.64 points. The Liberal Party is represented in both lower and upper houses and is a full member of Liberal International. The party’s support has fluctuated for the latest elections and in 2019, it lost almost all of its seats in the lower house.

In the Press Freedom Index, the Philippines scored 43.54 points, landing it in 136th place globally. President Duterte has been threatening journalists since he took office in 2016. Duterte’s presidency has been characterized by a rule with iron fist and putting liberalism in the country in jeopardy.

Being sandwiched between Russia and China, Mongolia really shines in a contrasting color. It has 6.50 points on the Democracy Index, making it the world’s 62nd democratic country. In the 2016 parliamentary elections, the local liberal party, Civil Will–Green Party, however, lost all of its seats and since then it hasn’t been represented.

Mongolia’s ranking in the Press Freedom Index is in 73rd place with 29.61 points. Media ownership in the country is fairly concentrated, even for a country of little over three million people. Plus, many media outlets face frequent lawsuits based on alleged defamation.

Indonesia scored 6.48 points in the Democratic Index and the country has made some improvement. The election of Joko Widodo in 2014 was said to be a promising move toward liberalizing Indonesia. Then again, the state’s official political ideology or political philosophy, pancasila, restricts the liberal actors to work freely in the country. So the change has been slow for now.

With 36.82 points, Indonesia ranks in 119th place in the Press Freedom Index. Reporting about West Papua is suppressed and journalists’ access is restricted.

Thailand saw most improvement during 2019, as it gained a total score of 6.32, a whole 1.96 points higher than the year before, and is now considered a ’flawed democracy’ in the Democracy Index. This means a rise of 38 ranks. The Democratic Party, which is a full member of Liberal International, sits currently in government.

In the Press Freedom Index, Thailand scores 44.94 points and ranks in 140th place globally. The Thai media is mostly talked about when giving examples of enforced lèse majesté. Self-censoring is fairly common in order not to catch the attention of the authorities.