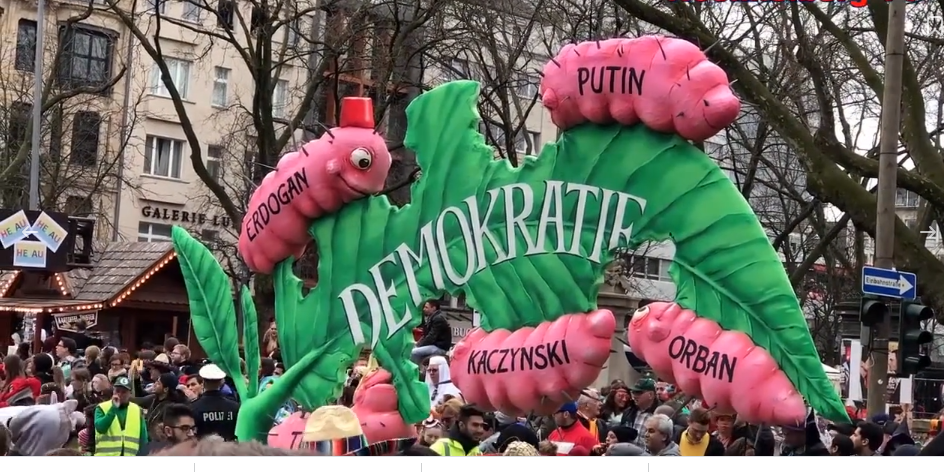 ‘Hitler is finished, but the seeds spread by his disordered mind have firm roots in too many fanatical brains. It is easier to remove tyrants and destroy concentration camps than to kill the ideas that gave them birth and strength’. (Harry S. Truman, 1945)

At the end of the Second Word War, Truman made the point that Fascism did not die with Mussolini and Hitler and if we want lasting peace, we need to guard our democratic values against the ‘evil spirits’ – i.e. authoritarianism. We can observe this alarmist language in recently published articles and books on extreme politics with the central claim that Fascism is back and rising all over the world. Well-regarded authors such as Timothy Snyder, Jason Stanley and the former US Secretary of State Madeleine Albright argue that democracy is under attack worldwide by right-wing politicians who seek to undermine democratic values to stay in power. One would find these claims rather alarmist and, indeed, Albright’s recent book is titled Fascism: A Warning. She warns us to ‘be awake to the assaults on democratic values that has gathered strength in many countries abroad and that is dividing America at home.’

Donald Trump’s xenophobic election campaign and demagogue politics have led many people to believe that he is a fascist who wants to completely overturn democracy. It is difficult to define Fascism, partially because it has been increasingly used as an all-purpose insult to discredit people we do not like. It would be a mistake to compare President Trump and other right-wing politicians such as Vladimir Putin, Viktor Orbán, Jarosław Kaczyński and Recep Tayyip Erdoğan to Hitler or Mussolini.

Historical Fascism was violent and revolutionary[1], much more extreme than the nationalist surge we experience today. It might be more accurate to call these leaders right-wing populists, ultranationalists, apartheid liberals or illiberals. But does it matter how we label them? We know that they challenge the democratic values that were put in place to prevent another world war and humanitarian crisis.

We live at a time where right-wing populism is on the rise and therefore it is important to make people aware of the features of Fascism. In his book ‘How Fascism Works’, Jason Stanley argues that Fascist politics is best viewed as a spectrum and conservative politicians are somewhere on that spectrum depending on how radicalised they are. He identifies different traits of fascist politics such as propaganda, unreality, anti-intellectualism, hierarchy, creation of a mythic national past, victimhood, sexual anxiety where the patriarchal hierarchy is threatened by growing gender equality… etc. Fascists tend to play on emotions, as they know that political behaviour is governed more by feelings and less by rationality. They often use fear-based politics and do not shy away from denying and distorting information to manipulate voters. Most importantly, Fascism aims to create division and separate the society into an ‘us’ and a ‘them’. As a result of globalisation and the 2008 financial crisis, many people feel left behind and disadvantaged. They need ‘scapegoats’ to blame for all the bad that has happened to them. They blame the foreigners, the immigrants, the ‘global elite’, the Jews. Fascist politics exploit this social anxiety to gain power in a democratic way and once in power they start dismantling democracy from within.

We can observe this ‘us vs. them politics’ in many countries today, starting with the US and President Trump’s ‘great-wall’ proposal, which was meant to keep foreigners out. A major part of his 2016 election campaign was built on racism and xenophobia with the aim to harness popular fears and anger about foreigners. Likewise, some anti-immigrant EU governments, including those of Italy, Hungary, Austria and Poland, keep blocking agreements on the reform of EU asylum laws that would ensure the fair distribution of responsibility for processing asylum seekers entering the EU. Fascist politics use ethnic, religious or racial distinctions to shape ideology and eventually policies. The increasingly authoritarian regime of Viktor Orbán, Prime Minister of Hungary, is one of the greatest masters of fearmongering over migrants. He was able to capitalise on the 2015 refugee crisis, which is still an unsolved issue for the EU. Orbán was the loudest critic of the EU’s refugee quota system and he presents his government as the defender of Christian Europe against Muslim migrants. In his public discourse, he accuses foreign-funded NGOs of meddling in Hungary’s domestic affairs to undermine the country’s national values, Christianity and sovereignty. He alleged that ‘organisations of George Soros are working tirelessly to bring hundreds of thousands of migrants into Europe.’ George Soros is a Hungarian-born, Jewish-American investor and philanthropist. His Open Society Foundations fights against corruption and promotes freedom and justice worldwide. Soros is a frequent target of conspiracy theories about Jews controlling the world. He is targeted not only in Hungary but in the US, UK, Australia, Honduras and many other countries where right-wing movements are present.

Jason Stanley has observed that in many cases Fascist politics tends to portray liberalism as a Jewish plot to make citizens willingly give up their power. Orbán openly endorsed the term ‘illiberal democracy’ for the first time in 2014, when he proudly stated that the Hungarian government is ‘building a non-liberal nation-state’ that applies liberal values selectively. Orbán’s strong rhetoric against Muslim migrants and liberal democratic values is proving contagious, particularly in the post-communist countries of Central and Eastern Europe that see the Hungarian government as an example to follow. In the last years, the European Parliament issued a resolution stating that the governments of Poland and Hungary pose “a clear risk of a serious breach” of core EU values including the tightening of restrictions around the free press, independent judiciary, academics, minorities and rights groups. We can observe similar developments in neighbouring countries like Romania and Bulgaria.

Going further West, Marine Le Pen, the leader of the right-wing populist National Rally (earlier Front National), entered the run-off for the French presidency in 2017. She gained 10.6 million votes, twice as much as the Islamophobic party achieved in 2002. The party has been linked to the recent ‘yellow vest’ (gilets jaunes) anti-establishment movement in France, which has posed great challenges to Emmanuel Macron’s presidency. Alongside the demonstration, there were many protesters from far-right groups directing anti-Semitic abuse towards Jews.

The Austrian Freedom Party (FPÖ), which was founded by former SS officers, has also gained significant support with its nationalist and xenophobic rhetoric. In Germany, Alternative für Deutschland has radicalised to the right and came third in the 2017 federal elections. The following year in Italy, the anti-establishment Five Star party entered into a coalition with the anti-immigration League, the party that has initiated the so-called ‘migration and security’ decree that aims to crack down on asylum rights by abolishing the ‘humanitarian protection’ resident permit. Still in 2018, the nationalist Sweden Democrats (SD) won ~18% of the vote, up from ~13% in the previous election. The party had long been associated with neo-Nazism, but in recent years it has rebranded itself and entered parliament in 2010. SD is against multiculturalism and pushes for strict immigration policies. Even though Sweden’s economy is strong, many people are concerned that the country’s welfare services have come under pressure from its record high 163 000 refugee intake during the 2015 refugee crisis. Reflecting on Sweden’s generous refugee intake and friendly attitude towards asylum seekers, Nigel Farage, the leader of the right-wing Brexit Party, has bluntly called Malmö the ‘rape capital of Europe’. Later, the BBC Reality Check has revealed that ‘the rate of reported rapes in Malmö has not dramatically risen in recent years and has in fact declined from its peak in 2010’.

We can conclude that Europe is definitely experiencing a nationalist rise, but there are many questions left unanswered about the future. How far are we on the sliding scale of Fascism? What happens if another wave of refugees hits Europe due to climate change combined with a financial crisis that experts claim to be in the making? Can economic malaise and another refugee crisis translate into an even bigger surge for the far right? How many boxes of fascist traits need to be ticked before a government can be declared fascist? And in today’s politics, is it really necessary to cry Fascism in order to mobilise people against nationalist populism and authoritarian tendencies?

Jason Stanley argues that Fascism centres on power and he sees Fascist politics as a ‘method’ to get into power. Once fascists are in government, they find a way to remain in power by amending the constitution, dismantling democracy and lay the foundation for authoritarianism.

Fascism is a scary word, we associate it with the horrors of the Second World War and that is why neo-Nazi parties such as the Front National, the Sweden Democrats and the FPÖ etc. have ‘rebranded’ themselves in the last decade to attract more voters. However, there is no guarantee that this new ‘brand’ will stay on once the far right gains enough support to govern.

While talking about Fascism today seems like fearmongering, we should resist the breaking-down of anti-Nazi taboos, the normalisation of xenophobia, racism and false claims. It would be a great mistake to assume the ‘end of history’ and take our liberal democracies for granted.